The ThinkPad is back

The Lenovo X300 is the best ThinkPad to date.

Ever since Chinese computer company Lenovo bought out IBM’s computer business, people have been bemoaning the fact that the ThinkPad line of laptops just hasn’t been able to slice the bread, so to speak. 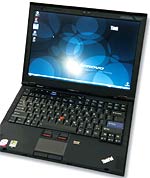 Lenovo X300
Yes, it has added a few features here and there, but the look and feel of the machines have remained virtually the same; nothing has seemed to mark the ThinkPad out from its competitors.

HP and Dell both entered the hallowed ThinkPad ground, of the travelling executive, with highperformance lightweight laptops and ThinkPad acolytes missed the familiar feel on some of the newer machines.

But, they will not have any complaints whatsoever with this amazing new machine from Lenovo. The X300 returns the ThinkPad series to the top of the performance charts.

If you are an executive and frequently find yourself standing in long lines at airport security, lugging a heavy laptop on your shoulder, this machine is perfect for you—this is at the top of the pile, because it has not sacrificed performance at the altar of lightness and portability.

The keyboard is good; it really doesn’t feel like you are typing on a small laptop. The 13.3-inch screen is fantastic, with a sharp 1440x900 native resolution, which has surprisingly good visibility even in sunlit areas.

Connectivity options are included as is an Optical Disc Drive. And, though it does not run a fast processor, the Intel L7100 Core 2 Duo running at 1.20 gigahertz, coupled with the machine’s 64 gigabyte solid-state drive (SSD), gets the job done brilliantly.

Hardcore gamers, however, will be disappointed. And the battery will run for around four hours on typical business tasks such as websurfing and office suites. We played a few movies on the SSD and got just over three-and-half hours of life.

What is also impressive is the machine’s oh-so-light weight—it weighs under 4 kg, including the AC adaptor, in a bag. In fact, the only downside was Windows Vista, but it seems that with the latest SP1 release, Microsoft has ironed out some of the creases that blighted earlier iterations of software as well. The real downside, if any, is the price: the X300 costs Rs 1.45 lakh.

But think about it—computers are there to simplify your life; you don’t want to get a bruised shoulder lugging around massive machines between meetings and to airports.

If you want a good laptop that offers you the convenience of being light, while at the same time having the ability to connect easily with other devices and also give decent performance, you can’t really ask for anything more. Welcome back, ThinkPad.

New kid on the laptop block