Mother Of All Populist Schemes

The Amma Unavagam project in Tamil Nadu is said to have been a key factor behind the stunning success of Jayalalithaa's AIADMK in the recent Lok Sabha polls. But is it sustainable?
N Madhavan | Print Edition: July 20, 2014 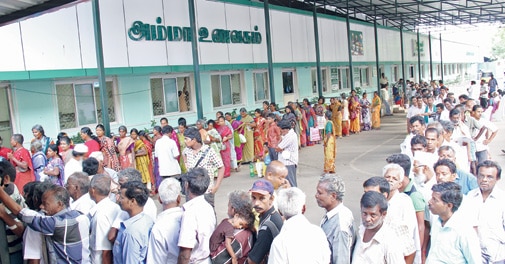 Tasting success: The queue outside the Amma Unavagam on the premises of Chennai's General Hospital at 7 am (PHOTOS: Jaison G)

Idli at Rs 1, pongal at Rs 5, sambar rice at Rs 5, curd rice at Rs 3 and two chappatis with dal at Rs 3. In times of runaway food inflation like the present, can any eatery offer such ridiculous prices? It is possible and the 294 Amma Unavagam (meaning mother's eatery) outlets in Tamil Nadu are doing just that. Launched by Chief Minister Jayalalithaa in February 2013, as an initiative to help the poor beat high food prices, Amma Unavagams - most of them located in urban centres - have become extremely popular and cater to over 250,000 customers every day.

"This is a boon for us. With a salary of Rs 7,000, I cannot afford to spend Rs100 a day on food. Now I spend just Rs 20," says M. Dharmendran, an assistant security officer, working for a security agency. He is waiting in the queue for the Amma Unavagam at Chennai's General Hospital to open. A. Srinivasan, a lab technician stands behind him, watching a video on his Nokia XL phone. He looks up and adds: "I save at least Rs60 a day on food. This is as good as a Rs1,500 hike in my salary."

With no signs of food prices easing, the footfalls to the outlets continue to rise by the day. Since the launch, over 115.4 million idlis, 10 million dishes of pongal, 19.2 million dishes of sambar rice, 10.4 million of curd rice and 20 million chappatis have been sold at the Chennai outlets alone. About 570 tonnes of rice and 400 tonnes of wheat are consumed every month at the Amma Unavagams located in Chennai, apart from pulses, oil, curd, vegetables and other ingredients.

Many of the people who eat at these outlets leave their comments in a notebook provided for that purpose at the outlets. The common theme across the comments is that the fare is 'tasty, hygienic and economical'. This correspondent, too, had breakfast at the General Hospital outlet and heartily endorses this view. 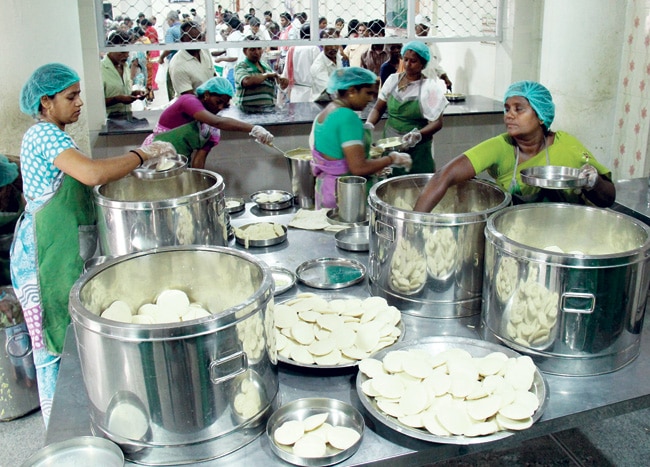 Behind the scenes: 150 idlis are prepared every minute at this outlet Behind the scenes: Pongal being readied
Indeed, hygiene is a critical element at Amma Unavagam outlets. The project was originally thought of to address public health concerns. "Over a million people in Chennai do not have access to hygienic food. They are susceptible to water borne diseases as they eat at road side eateries," says a senior health official at the Chennai Corporation. "We were looking at providing low-cost food for these people. When this plan was presented to the Chief Minister, she saw the bigger picture and converted the scheme into a tool for the poor to overcome food inflation." The Chennai Corporation manages the city's 203 outlets.

The landslide win for Jayalalithaa's AIADMK in the recent Lok Sabha polls - it won 37 of the 39 Lok Sabha seats in the state - is attributed by political pundits partly to the growing popularity of the Anna Unavagams. The goodwill the outlets have generated prompted Jayalalithaa to announce, soon after the poll results were declared, plans for 360 more outlets across the state.

The initiative has triggered interest outside Tamil Nadu as well. The governments of Karnataka and Rajasthan have shown interest in replicating the initiative. Even Gujarat, which is seen as a repository of people friendly schemes, has sent officials to study the Amma Unavagams. A delegation from Egypt made a visit a few weeks ago. 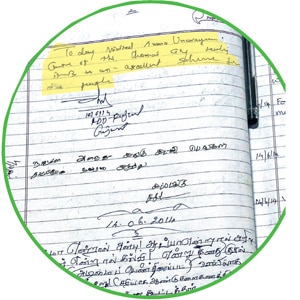 All are welcome: A page from the book provided for visitors to leave their comments
Sure, the project has its critics as well. "The government gives free rice and provides subsidised pulses, and oil through the public distribution system (PDS). It also supplies cooking gas and kerosene at low prices. On top of this, Jayalalithaa, as part of her election promise, is giving food processing items such as mixers and grinders free. Where is the need to offer food at such low prices," asks Subramaniam Balaji, an advocate, who has been challenging the culture of freebies that political parties announce to garner votes in court. He fears the subsidy will soon assume gargantuan proportions.

There is a significant subsidy. The under-recovery is as high as 60 per cent of the cost, putting the subsidy amount at Rs 100 crore annually. "We had initially budgeted a much smaller subsidy but increasing input costs and higher patronage is pushing up the deficit," says the Chennai Corporation official. Some still see this as a welcome initiative. "While we have a lot of programmes to aid the rural poor, none exists for their urban cousins. In the absence of a social safety net like MGNREGA, the urban poor suffer a lot," says J. Jeyaranjan, Director, Institute for Development Alternatives, Chennai. He wants more such outlets at places where the poor can access to low-cost hygienic food.

Balaji is not convinced. "If unhygienic food is the reason for the Amma Unavagams, all health inspectors in the state should be sacked," he says. Recent media reports have raised fresh concerns about targeting of the subsidy as well. Employees of leading software companies have started eating at Amma Unavagams located in Chennai's IT corridor. "This has become yet another case of poorly directed subsidy," he adds.

There are other challenges as well. As the government expands the initiative, the subsidy will rise and the ability of local bodies to fund it will be impaired. Jeyaranjan does not see a problem there. "The annual food subsidy bill of the Tamil Nadu government is Rs 4,200 crore and even after adding 360 more outlets, the subsidy will be only around Rs 200 crore," he says. But again, the 294 outlets currently in operation are all located on land or in buildings belonging to the government, and this has meant an average initial investment of just Rs 5 lakh per outlet. Further expansion will have to move beyond and that will call for larger investment.

The government is revisiting the model as the number of outlets reach a critical scale in a bid to cut costs and maintain quality. The concept of a centralised kitchen is being studied.

"It will help us lower costs, standardise cooking processes and ensure uniform taste and quality across outlets," says the official. Today, all the outlets have separate kitchen and cooks. The procurement process is also being refined to ensure quality and prevent leakages. As the outlets increase and so do the footfalls, additional revenue streams are being looked at to capitalise on it. Broadcasting ads on the 60-inch televisions that are a feature of all the outlets is one such option. Currently, the TVs simply reiterate the state governments' achievements over and over again. 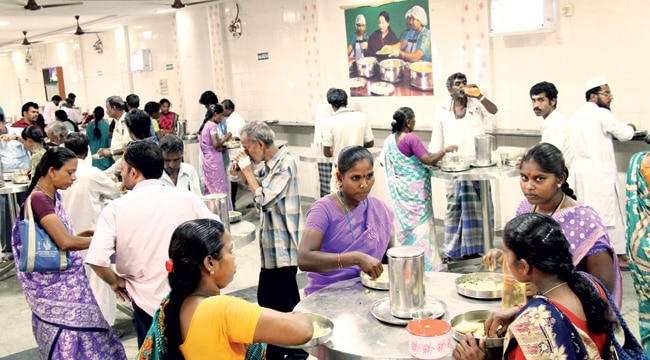 All are welcome: It is not just the poor who eat at Amma Unavagam outlets
Tags: Amma Unavagam project | Amma canteens in Tamil Nadu | J Jayalalithaa | AIADMK | subsidised food | canteens