The Hyundai Veloster, a compact sports car on display at the Auto Expo in Delhi, drew huge crowds all through the show. Most men who thronged the Hyundai stall, however, seemed more interested in the model posing next to it than in the car.

With pouting lips, curvy hips and legs that went on forever, Manhar Rashid was the cynosure of all eyes. The story was the same at all the other stalls that had hired female models. Rashid, currently pursuing a distance-learning MBA, says she is doing it "just because of the money". She pocketed Rs 45,000 for a week's work. 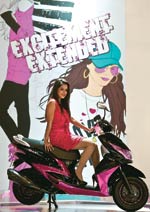 A model at the TVS stall
"There are people who do not come to see the vehicles," says Chandrika Saha, an aspiring Bengali actress, who modelled for TVS, India's third-largest twowheeler maker. "They click pictures and pass lewd comments."

Fortunately, there are bouncers to protect the models. Saha earned a cool Rs 1.2 lakh for her trouble. Unlike many of the models, Prabjot Chhabra, the face of the Peugeot stall, was well covered in a golden yellow outfit.

The 25-year old, pursuing a law degree from Delhi University, believes that modelling part-time will help her develop her communication skills and gain some much-needed exposure. "You are putting in your 100 per cent in building the company's brand," she says.

Chhabra is the exception. For most, it is all about earning a tidy sum quickly. These 'Booth Babes', as they are known, are generally 20-somethings hired by companies to add pizzazz to their stalls.

"Most are college girls who are here just for the extra pocket money," says Hem Kashyap, the agent representing Rashid and Chhabra.

She should know. Kashyap runs Hem Associates with her brother, Hitesh. She started the business on her own 14 years ago. Back then, Sushil Sharma, a family friend, who was also the Vice President of Action Shoes, sought her help in finding some college girls willing to be models at the 1997 Trade Fair. Since then, there has been no looking back.

Girls getting ready for the auto show
Many hopefuls come to her office and leave behind their resumes and photographs. Kashyap does not take more than a couple of minutes to size up each girl. "There are different categories," she says. "Some are just beautiful and have to be on stage to unveil the product." Others are selected for duty at the registration counter or to attend to delegates.

Kashyap keeps about 10 to 25 per cent of a model's fees, depending on the event. If it is just an evening conference, she earns less because models get only around Rs 1,000 to Rs 1,500, and the commission on such assignments can be as low as Rs 150. 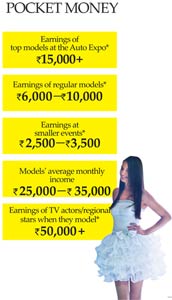 Click here to Enlarge
When events are larger, such as the one during the Formula One Race, model fees shoot up to Rs 5,000 per day, with Kashyap earning a healthy 25 per cent.

While the Auto Expo is a biennial event, the girls have enough to keep themselves occupied in the interim.

Rashid and Chhabra usually do shorter events such as press conferences and product launches. Rashid also does Page Three events, where she attends to guests through the evening. Chhabra is not really keen on these. "I prefer doing corporate events where I can be home by 10 at night," she says.

For Kashyap, nothing will change. The Auto Expo will come around again in 2014, and she will have her hands full arranging booth babes. The industry's attrition rate is high, "but it is not difficult to find girls," she says. There will be a whole new bunch looking to earn some quick money. What drives youngsters to invest in art