Banks are proliferating at a rapid pace in the Sivaganga district of Tamil Nadu. Over the last two years, 28 new branches have been opened and five more are likely to commence operations soon. N. Madhavan checks out if this would improve the quality of life of the people in this district.

Not a month goes without a public or a private sector bank announcing the opening of a branch in the Sivaganga district of southern Tamil Nadu. Over the last two years, 28 new branches have been opened and five more are likely to commence operations soon.

With 169 bank branches catering to a population of 1.15 million people, the population per branch, at 6,810, is among the lowest in the country. This district, for bank chairmen, is a special focus area when it comes to financial inclusion— not surprising, considering that Sivaganga happens to be the Lok Sabha constituency of Finance Minister P. Chidambaram. Inclusive empowerment: Beneficiaries of the Milch Animal Loan Scheme at an IOB branch
Has this special focus translated into a better quality of life for the people in the district? We (photographer G. Keshav Raj and I) set out to see it first hand. The drive from Madurai to Karaikudi, a prominent town in the Sivaganga district about 75 km to the east, and then to Sivaganga, the district headquarters 50 km farther south-west, takes us through barren lands with wild shrubs. The red laterite soil found in large parts of the district is unfit for cultivation. That explains why only 29 per cent of the district’s geographical area of 4,189 sq km is under cultivation. Also, with no perennial rivers here and with erratic rainfall, crop insurance claims from the district are reportedly among the highest in the country.

We also do not come across too many industrial units during the three-hour drive. That is because industrialisation has given this dis-trict a miss (according to government data, there are just 157 registered factories). For many years, Sakthi Sugar’s 5,000-tonne-per day sugar plant was the only major industry here. In May this year, Sterlite Industries announced the setting up of a Rs 100-crore aluminium fluoride plant near Karaikudi. Banking on NREGP: Close to 90,000 accounts are set to be opened, thanks to the employment guarantee plan
In fact, one of the biggest grouses the people of this district harbour against Chidambaram (who has been elected from this constituency six times since 1984 and has been a Union minister off and on for about 13 years), is that he could have used his influence to redirect some major industrial investments here. Consequently, small scale and cottage industries dominate the region. It soon becomes clear to us that if there is one district that could benefit a lot from financial inclusion, it is Sivaganga. Our first stop is the Idayamelur branch of the Indian Overseas Bank (IOB), about 7 km from Sivaganga.

We meet a group of 20 women from a nearby village who have come to avail of loans for milch animals. Says K. Sundari, the middle-aged leader of the group, which has formed Muniyandipatti Milk Producers Co-operative Society to supply milk to Aavin, the stateowned milk producer and distributor: “We were rearing cows and supplying milk over the last few years but still could not make ends meet as we paid a high rate of interest, having borrowed from money lenders at well over 36 per cent per annum. We were forced to work as labourers for supplementary income. After the banks announced the special ‘5,000 Milch Animals Scheme’, we decided to take bank finance, which came at 9 per cent.” It was the first time that Sundari and her fellow villagers accessed banking facilities. “We will not have to go and work as labourers any more,” she adds confidently with a smile. The Idayamelur branch has, over the last one year, disbursed 370 milch animal loans, mostly to first-time bank borrowers.

Sivaganga’s District Collector Bansal: Taking banking to the people
Explains T.V. Nagarajan, Chief Regional Manager, IOB, the lead bank for the district: “We have approached financial inclusion in two ways. One, banks have been set up across the district so as to make them accessible to the people and secondly, after a special meeting chaired by Finance Minister Chidambaram in March 2007, special lending schemes, specifically designed for the needs of the people in the district, have been rolled out.” These include the “5,000 Milch Animal Scheme”, loans for drip irrigation, funding for the coir industry cluster and top-up loans for those building dwelling units under the Indira Awas Yojana.

Over the last one year, banks in the district have sanctioned loans worth Rs 7.08 crore for milch animals, Rs 2.04 crore to the coir sector and Rs 3.13 crore under the Indira Awas Yojana top-up scheme. The district’s credit disbursement has increased from Rs 534.32 crore in 2005-06 to Rs 774.65 crore in 2007-08. It is pegged at Rs 851.89 crore for 2008-09. We meet District Collector Pankaj Kumar Bansal to understand how financial inclusion initiatives have helped the common man. 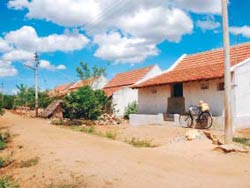 It’s a first for Poolankurichi: Indira Awas Yojana has provided villages with neat little houses
“Over the last four months, 63,000 new bank accounts have been opened. These are people who have never ventured near a bank before. That apart, 89,970 accounts are waiting to be opened as a part of the National Rural Employment Guarantee Progr-amme (NREGP),” he says.

Sivaganga is one of the three districts in Tamil Nadu selected for NREGP in the first phase and the state administration is insisting that each beneficiary opens a bank account for easy settlement of his/her payments. “In one shot, a whole lot of people, hitherto not exposed to banking, will have bank accounts. It will help the people of the district escape money lenders, who charge rates as high as 60 per cent,” Bansal adds. Smart Banking: Technology comes in handy at Namanur
Will it be viable to open branches in small and remote villages? “We are looking at newer economical ways of reaching banking to the people,” says Bansal. He is referring to the “branchless banking” introduced by Corporation Bank in four panchayats in the district. We decide to check out one of these and proceed to Namanur, a panchayat with a population of 700 people.

Almost an hour’s drive later, we reach a nondescript village. There aren’t too many people on the street. One house, though, appeared crowded. We realise that it is the house of K.R. Muruganandham, a “business correspondent”, the name Corporation Bank has given to its “branchless banking” representative. We count at least six women waiting to transact business. In front of Muruganandham is a set-top box-like machine, which, through a smart card, biometric verification and telephone link to the Corporation Bank’s central server at Mangalore, enables people to deposit and withdraw cash. As we enter the house, V. Varadeswari, a daily labourer, is depositing Rs 100. “Earlier, one had to go to Sivaganga to deposit the money in a bank and it entailed a bus fare of Rs 15. Many of us, as a result, chose to keep the cash at home,” she says in chaste Tamil when we ask her how she likes the new way of banking.

According to V. Ravi Kumar, Manager, Sivaganga branch, Corporation Bank, Muruganandham does a daily business worth Rs 5,000 to Rs 10,000. On Day 2, we start early from Karaikudi and proceed towards S. Pudur, a village with 50 households and a population of 2,120, where IOB opened a branch in May this year.

IOB’s Nagarajan: Designing schemes for the common man
As we reach the village after more than an hour’s drive, we find it deserted. The branch is no different. The only two people inside are the employees. The manager there tells us that the branch has 410 accounts, deposits of Rs 33 lakh and advances of Rs 2 lakh. Wondering whether such a branch would be viable, we take a detour to Poolankurichi, 30 km to the east. Here, we find a neat array of houses built using the Indira Awas Yojana top-up loan. The beneficiaries are dealing with banks for the first time.

BT tried to get Finance Minister P. Chidambaram’s perspective but he could not be reached for comment. However, after two days and travel spanning 600 km, we realise that the financial inclusion drive has begun to impact people positively in Sivaganga district. But it’s still early days. Considering the resources sunk, the extent of success will be determined entirely by how well people leverage their access to banks. As they say, you can lead a horse to water but you can’t make it drink.