A nondescript town in Kerala is turning into a healthcare hub. 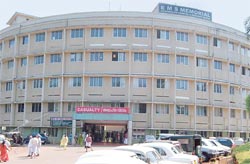 EMS Memorial Hospital
Nestled between the dense green Western Ghats and the coastal region is a small town that is giving its big counterparts in Kerala a run for their money. Perinthalmanna, a taluk headquarters in the Malappuram district, has emerged as a healthcare hub not only for Kerala and parts of its adjoining states but has also had a headstart as a favoured medical tourism destination for the Gulf countries.

Perinthalmanna, which has a population of 45,000, is too small a place to be called a city. But size, perhaps, did not matter to state’s Finance Minister Thomas Isaac when he said the place was fast developing into a medical city in Malabar in his Budget speech last year. That was only an official recognition to a town that boasts of three super-speciality hospitals, a medical college and a number of small and mid-sized hospitals and clinics. Not just that, the Kerala Pharmaceutical Manufacturers Association is also based here.

The first impression, however, belies the impressive status of the town. Rows and rows of tile-roofed old buildings are lined on narrow roads—what stands out is the presence of either a medical store or a hospital every few yards. While similar towns in the Malabar belt have predominant presence of jewellery marts, Perinthalmanna is distinguished for its hospitals.

Surprising then, while the town’s rise in the last 10 years as a healthcare hub is talked about in awe, it has not yet been chronicled. Leading the remarkable healthcare infrastructure of the town is EMS Memorial Cooperative Hospital and Research Centre located at Panambi. Started in 1998 with a share capital of Rs 50 lakh in a rented building, the centre has grown in both size and stature. The 500-bed hospital derives its name from the legendary Marxist Chief Minister, the late EMS Namboodiripad, whose birthplace is close-by. Today, it is the largest hospital in the cooperative sector in Kerala with 16,626 members and a share capital of Rs 30 crore. Pharmacy inside the EMS Hospital
Says Dr. V.U. Seethi, Vice Chairman of EMS Hospital as well as of Indian Medical Association: “We get patients not just from across Malappuram district, but also from the neighbouring Palakkad, Thrissur and Kozhikode districts, apart from Tamil Nadu, Lakshadweep and Andaman & Nicobar Islands.” Two other prominent hospitals in town—Al Shifa Hospital and Moulana Hospital, both with 450-bed capacity—have rapidly risen to super-speciality heights. Moulana is now ramping up its capacity to 700 beds, while Al Shifa has set up contact centres in West Asia to tap NRIs and foreign nationals. The MES Medical College, that was started four years ago, is set to dole out its first batch of medical graduates.

That sounds incredible for a town that cannot lay claim to a single manufacturing unit worth its name. The picture gets much bigger if Ayurveda, too, is factored in. Malappuram district, of which Perinthalmanna is a part, houses the worldrenowned Kottakkal Aryavaidya Shala. The Vaidya Shala runs an ayurvedic research centre, a nursing home and a hospital. People from all over the world come here for various ayurvedic therapies. Says Dr. R. Satheesh, Chief Medical Officer, Al Shifa Hospital: “The town’s proximity to Vaidya Shala provides patients a chance for combination therapy of both allopathy and ayurveda, which we promote.”

Perinthalmanna’s meteoric rise as a medical hub can be ascribed in large part to its Gulf-triggered economy. The district of Malappuram has a predominant Muslim population, and a good number of Muslim youth were headed for the Gulf in the ’70s and the ’80s when agriculture was the only source of employment. English Pharmacy
The Gulf-induced economy brought about dramatic changes in the lifestyle of these families. At present, on an average, at least one member from each family in Malappuram district is employed in the Gulf. Says P. Unneen, MD, Al Shifa: “Perinthalmanna’s closer access to Arab countries now helps it to attract patients from the Gulf.”

Another reason why people flock to Perinthalmanna for medical treatment is its small-town character in cost of services. According to Al Shifa’s Dr Satheesh: “Replacement surgeries like total hip replacement, total knee replacement, cochlear implants, etc., are inexpensive in this part of Kerala and cost less than half of what they would cost in metros.” Setting up a hospital in cities incurs huge expenditure on account of prohibitive land and infrastructure costs. “In Perinthalmanna, these savings are passed on to patients,” adds Unneen. EMS Hospital boasts of a 90 per cent occupancy and the hospital Chairman Dr A. Mohammed cites low-cost services as its USP.

This apart, the medicine town has a better patient-doctor ratio as compared to other places in the state, says Dr S. Ramdas, who runs Ramdas Clinic & Nursing Home, the town’s oldest hospital. Incidentally, English Medicine Pharmacy, the town’s first medical shop, came up in 1945. According to its proprietor V. Narayanan, the store arrived even before medicines did. Initially, the pharmacy had no medicine and only chemical mixtures to sell. The next shop arrived 33 years later, and today the small town has more than 60 shops. With Perinthalmanna’s rise as a healthcare centre, the town has become a hot favourite with the doctors (there are 400 of them)—especially with the students passing out of medical colleges in Karnataka, Tamil Nadu and Andhra Pradesh. The reason: A fresh medical graduate from Bangalore can earn more than three times the pay offered in the IT capital if he switches to a hospital in Perinthalmanna. This is because of the huge demand for doctors and traditionally small number of doctors the state’s medical colleges produce. By all accounts, Perinthalmanna sounds like a prescription for sure-shot growth.