It is a cold, gloomy and wet Seattle morning, predictably so at this time of the year in this city nestled near the forests of northwestern United States.

I am visiting Microsoft's Research and Development facility. Seattle also houses the offices of tech major Amazon, but Microsoft has its own charm here. Shops offer special discounts for Microsoft employees. My shuttle driver, who takes me to my destination in Redmond, 18 km from the airport, says most Indians in the city work for Microsoft.

Arriving, I stand awestruck for some time.

The Microsoft campus comprises some 150-odd buildings. The sheer scale of the place is overpowering - it looks like a mini township, equipped with everything from restaurants to health clubs to playgrounds. People mostly use shuttle cars to travel from one building to another.

LISTINGS:Microsoft's Bill Gates still the richest in the world

Microsoft, still a giant in the world of technology, has had its ups and downs in recent years and is hardly a 'cool' company anymore. But it is still the stuff of legend and remains influential in the world of computing. That is why I am most intrigued by its much-discussed Natural User Interface, or NUI, concept. Soon touch technology can be experienced on any surface, even simple wooden tables
NUI per se is not new. Anyone who has used the Kinect system of the Xbox 360 console has experienced it. For the uninitiated, Kinect allows users to play computer games without having to hold a controller.

The characters are controlled using body movements, so there is little danger of, in the excitement of the moment, controllers smashing into other people, or worse, right into the expensive flat-panel displays and shattering them.

Kinect works with two cameras - a projector camera that puts invisible light onto users and a sensor camera that deciphers the reflected light from users.

Kinect, which Microsoft developed together with Israel's PrimeSense, is the cornerstone of the company's vision of the future, says Steve Clayton.

Clayton is officially designated Story Teller and his job is to tell the Microsoft story to all those who visit and want to hear it. His narration can sound a bit like Minority Report starring Tom Cruise.

"Imagine walls having ears, listening in on conversations and transcribing them in a whole host of languages?" says Clayton. Can such a thing really happen? It can.

This is where the 'Smart Home' concept of the future comes in, which is that of extending Kinect to the real world. Keep a coffee bottle on the kitchen counter, the cameras and sensors sense it immediately and a laser projection falls on the counter with a menu listing all the ways you can use that coffee. It is not just the kitchen. The colours and themes on the walls of the other rooms can change according to the user preferences. 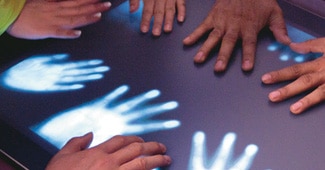 The surface has optical touch technology, with the ability to sense objects on the screen placed underneath.
You simply utter aloud what you want, and it happens. I felt I was actually communicating with the lifeless objects around me. Microsoft Research, with an army of 850 scientists in its ranks, has a simple philosophy: it is important for computers to understand humans and not the other way around.

A nascent research project I saw was working at converting every kind of surface into a touchscreen - walls, tables, everything. There are projections on these surfaces to sense touch. I even played a few ball games wearing 3D glasses with these projections.

A recent product of Microsoft's labs is the latest version of its surface computing platform. Thinner and lighter than its predecessor, it has a host of applications that Microsoft executives hope will invade retail and hospitality sectors soon.

Of course, not all the work being done inside these labs will make it into the world outside, but Microsoft executives believe commercialising even 15 to 20 per cent of their research could change the face of computing. And maybe, just maybe, make Microsoft cool again.

This correspondent travelled to Seattle at the invitation of Microsoft.
TweetYoutube

Maradona does a Hand of God again!