Bangalore is set to get its world class airport. But the roads don’t measure up yet.

I am two kilometres from the Rs 2,500-crore Bangalore International Airport (BIAL) and congratulating myself for an almost uninterrupted 30-km drive from the city, when I suddenly run out of road. To get to the new airport of India’s IT capital, I should be able to fly over an existing railway line and drive straight into the spanking new facility. But travellers like me would hit a roadblock for the first few months in the shape of roads that resemble the surface of the moon for a kilometre of stretch (and potentially get delayed at a railway crossing) as they wait for an adjacent and much-delayed ‘trumpet’ flyover to be finally completed. 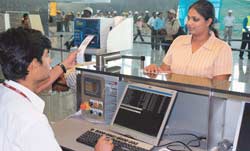 Staff carry out mock check-in test
The city administration, too, is making a last-minute scramble to provide unhindered access to the airport with a series of underpasses, but this project has got massively delayed. While each unit is expected to be assembled in three days, using pre-fabricated pieces to hasten the process, workers run into unexpected hurdles with old sewer and water lines, which are severed during the digging and construction stages. As a result, the first underpass has taken over a month to get completed and a chastened city corporation has announced that the second one will take 45 days to complete.

Despite this, the drive from the northern fringes of the city has taken just 35 minutes (and around an hour from the city centre). From afar, the terminal building looks space age compared to the patchwork facilities that travellers will use for over a month more. Work is on non-stop for the last few weeks, as BIAL executives work literally 24/7 to meet the March 30 deadline, when the first commercial flight is expected to take off. On the ground, Albert Bruner, the Swiss CEO of BIAL, leads the effort to get the airport ready for the D-day. Departure lounge at the new international airport
While support functions such as IT and training of airport staff are nearly complete, a lot more evidently needs to be done on the ground. “We are happy with a few aspects, but we have a lot to do,” Bruner says, as we begin a short trip from the project office to the terminal building. Part of the problem for Bruner and his team is the rapid expansion of the project; initially the project cost was pegged at Rs 1,412 crore; then escalated to Rs 1,930 crore before finally reaching the current estimate of over Rs 2,500 crore. “We are not behind schedule,” says Bruner vehemently, “the EPC (engineering, procurement and contract) work alone increased by 70 per cent.” He admits there are several operational areas scrambling to meet the deadline.

From outside the terminal, the project site itself looks like one massive construction zone; there is mud, cement and stones in all directions, and, lorries and earth-moving equipment are working overtime. According to BIAL officials, around 6,000 people were working on the project site during peak construction and the airport today has 450 staff working on its rolls. “We want to be ready to make a seamless transition from the existing airport to this new facility,” says Bruner.

Inside the terminal building, operational training is already underway, as mock flight announcements are being made on the loudspeaker and ‘passengers’ line up to check into the flight. Despite obviously being a practice run, there is little frivolity in the exercise. From the time taken to check in passengers, to how quickly used luggage trolleys are moved and checked-in baggage is transported, everything is carefully monitored. According to BIAL’s COO Marcel Hungerbuehler, the airport is expected to handle around 30 flights per hour during peak hours and will have a total of 54 check-in counters (including 18 self-service counters) to speed up the entire process, with Wi-Fi connectivity enabling airlines to have mobile check-in units too. There is maximum use of natural light
The frenetic pace of work at the BIAL site means that CEO Bruner has been at work early in the morning and like most colleagues, forgone many weekends to meet the stiff deadline. Despite his best efforts, there has been strong opposition to the location of this facility, with most travellers having to drive for an hour or more to reach this airport. During peak hours, those driving from areas such as Electronics City, home to the likes of Infosys, can expect a two-hour ride to the airport. “There is no question of keeping the existing airport open; we have an agreement with the government for this,” Bruner says. While some critics argue that several other cities such as London and New York have two or more airports, Bruner quickly points out that they receive 100 million or more passengers, compared to around 11 million for Bangalore. To try and soften the blow, Bruner says the User Development Fee will be halved for the first two months of operation (Rs 240 for domestic and Rs 520 for international passengers) as the airport operations kick into high gear.

The 4-km-long concrete runway ensures smooth landing
While there will be parking space for 2,000 cars, BIAL has also enlisted 900 taxis and plans to have both air-conditioned and regular bus services at the airport. As we walk down one of the nine aerobridges and on to the four-kmlong concrete runway, Bruner tells us that away from the airport itself, the dozen concessionaires selected to provide support services to this airport will alone invest Rs 1,000 crore in their infrastructure. Aside from the dispute over the airport, the selection of these agencies ignites its own protests, with cab operators at the existing HAL Airport threatening to take legal action against BIAL. “We had an international tender for all our services and for our cab services, we made GPS and GPRS services mandatory and they failed to meet that requirement,” he explains. Meanwhile, on the tarmac itself, four new-age fire engines line up, sirens wailing to undertake a fullscale demonstration of their capabilities, with these imported vehicles able to douse flames with over 7,000 litres of water or foam per minute and race up to a speed of 120 kmph to reach emergency situations quickly.

For his part, Bruner is already looking beyond the existing facility. “This will only last us for a short span of time and we’re already working on phase II,” he says as we head out of the terminal, “we will invest more than we did in the first tranche to keep pace with the expected 30-35 per cent increase in traffic.”