There aren't many reasons for anyone to wait in the rain at a South Delhi petrol pump at 5:30 a.m. on a Sunday. But here I am at a Moti Bagh gas station on a soggy monsoon weekend in late August, with a Steppenwolf classic pounding in my head: Like a true nature's child, we were born, born to be wild, we can climb so high, I never wanna die ….

I am waiting for members of the local HOG - the Harley Owners Group - and I know my wait won't be long. At the sight of the first Harley - a Roadking of the Touring family - the music in my head grows louder. These bikers are no Hells Angels on Wheels, cruising for a bruising. Nor are they crime-fighters in the Mad Max mould. They're an assorted bunch of regular people - tech geeks, CEOs, architects, TV executives - whose idea of a good time with friends is the thrill of riding on powerful machines on the highway with the wind in their faces. If any biker movie comes close, it's Wild Hogs, in which a dentist, computer programmer, plumber and lawyer discover the joy of the open road. 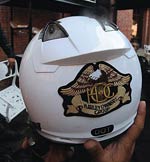 One of the bikers shows off his official gear
A newcomer to the world of Harleys, I try to contain my awe at the black-and-chrome Roadking as I shake hands with its owner, Vikas Sharma, known to his friends as Viki. He is a partner at Trinity, an architectural studio. As I'm talking with Viki, an Iron 883 and a Fat Boy thunder in, almost in unison.

Few brands can convey Americanness quite like Harley-Davidson, which was born in Milwaukee, Wisconsin, in the early 20th century. The company not only survived the Great Depression, but also spawned a widespread subculture. Who can forget the chopper adorned with stars and stripes, known as the 'Captain America bike', that Peter Fonda rode in the 1969 film Easy Rider?

Eventually, the group at the petrol pump consists of seven Harleys. Despite the hour, a crowd gathers around the posse of Harley riders, including joggers and teenagers doing stunts on their BMX bikes. "We're used to public attention," says 'Patch', whom his professional colleagues know as Ashwani Singla, CEO, South Asia, of communications company Penn Schoen Berland. I notice some onlookers clicking pictures on their mobile phones. Members of the Delhi HOG unwind outside the All-American Diner on a Sunday morning
Understandable, given seven gleaming machines that exude power. For example, Patch's Fat Boy can produce the power of about 100 horses. If there are any Terminator fans in the crowd, they may recognise it as the model Arnold Schwarzenegger rode in the 1991 film Terminator 2.

Patch explains to me that the 'Softail' model got its name because the bike was designed with concealed shocks to give it the appearance of a hard-tail, another group vrooms in on Suzuki Hayabusas, Honda CBRs, Ducati 1198s, and other bikes. Such a sight would not have been possible had the Indian government not decided in 2007 to allow the import of superbikes with engines above 500 cc.


At last it is 6 a.m., and the bikers are off. Ignition. One down to first gear. Throttle. The sound of seven Harleys as they form an arrowhead - the immortals of the motoring world clearing their throats - thunders like a hundred drums. Today's ride is only about an hour - to Noida and back - but on some weekends, the HOG members go further, to cities such as Udaipur or Chandigarh.

Thrills may be what the hogs (as bikers often call themselves) live for, but safety comes first - not just personal safety, but also the safety of fellow bikers. "Your life is at stake when you have this kind of power in your hands," says Asis Kumar Mandal, who goes by the alias 'Dada'.

This geologist, who works for a public-sector company, is the leader of the pack. He adds: "We use signs to communicate with each other while riding. We take all the precautions we can." True to his word, he turns down my request to ride pillion with one of the bikers, as I have no helmet. Clearly, there's nothing reckless about these guys. They take their responsibilities seriously. 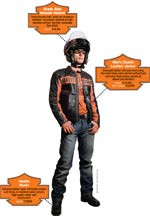 Click here to Enlarge
"I don't take my son for even a short ride without proper safety gear," says Patch, who got his bike as a gift from his businesswoman wife, in return for a TV he gave her 20 years ago! To make an American morning of it, I mosey over to the All-American Diner at the India Habitat Centre and wait for the bikers to return. At 8 a.m., they're back. Over a breakfast of waffles, pancakes and French toast, they tell me about their years of biking.

Most of them got their first taste of it 15 to 20 years ago. They drove cars for years, but the arrival of Harley-Davidson in India in 2010, with bikes costing between Rs 5.5 lakh and Rs 35 lakh, has drawn them back to the biker culture.

Today's Harley is, of course, a far cry from the beat-up Harleys in the Delhi of the 1980s, which served as humble six-seater taxis known as phatphatis. "My Harley makes me feel invincible," says Sportster owner Sharad Sharma, a former host of an automotive show on TV, who is known to his biker friends as 'Sheru'. Samir Malhotra, who goes by the handle 'Sami' and owns a company called SM Steel, is the only 'double hog' - he has owned two Harleys (he graduated from a Sportster to a Fat Boy). His first bike was the Yamaha RX100, which in the1980s had cult status.

Sami looks forward to the day when a lady hog joins their group. But he may have to wait a while. Sanjay Tripathi, Director, Marketing, at Harley-Davidson India, says that although Harley buyers are all over the map, including the north-eastern states, there have been all of two female customers since the Indian dealerships opened their doors in July 2010.

For many, Harleys are a childhood dream come true. "My dream was always to own one," says Keerthan 'Kee' Adyanthaya, Managing Director, National Geographic Channel Network India, and the youngest member of the group. "It's like a cowboy on his horse."

I ask the debonair 'Sheru' a somewhat personal question: what was his wife's reaction when he told her that he was going to buy a Harley? "She wanted to kill me," he says. "I didn't tell her that I had booked a Harley. She got to know about it through a friend and asked me, 'Did you book a Harley?' I sheepishly said yes. She just looked at me and then looked away, and she hasn't looked at me ever since." He laughs. I ask whether they are still married, and he says 'yes' with another laugh.

The fascination with Harleys is summed up simply by Anil Arora, a promoter of MJ Logistics and a Heritage Softail Classic owner. He says: "We were riding to Udaipur. After stopping for the night at Kishangarh, we resumed the ride. It was 10 minutes before sunrise. It was a beautiful stretch on NH8. As the 12 of us turned around a bend in the road, we saw the sun rising, and its reflection on the chrome, changing colour. It was a sight. You had to see it to believe it. I think that was my 'it' moment. That's when I thought I've got my money's worth."