With change of guard in at least half-a-dozen companies, the Indian steel industry is undergoing unprecedented churn. It will emerge stronger than ever. The World Steel Association, which represents 85 per cent of the world's steel producers, said in April that it expected demand for the commodity in India to grow 7 per cent this year as well as next year. This is over five times the projected global growth 1.3 per cent in 2019 and 1 per cent in 2020. India is expected to grow faster than most regions of the world.

This is not something entirely new. In the cyclical global steel industry that is prone to severe upturns and downturns, the Indian market has forever been a bright spot. The association's April outlook only reiterates that. In the last 10 years, India's crude steel production has grown 6.3 per cent on an average, the fastest among big steel producing nations, nearly double the world average of 3.2 per cent. In absolute terms, production has grown from 57.8 million tonnes in 2008 to 106.5 million tonnes in 2018. In the process, India has overtaken Russia and the US. It surpassed Japan last year to become the largest steel producing nation in the world after China. Among big nations, India has been the only country to consistently report increase in production in each of the last 10 years. The trend is likely to continue.

In the global context, though, the meteoric rise of China has always dwarfed the India story. At the turn of the century, China was producing 128.5 million tonnes steel, accounting for 15 per cent of the world's production then. Its economic rise was led largely by its steel industry. In 2018, it produced 928.3 million tonnes steel, over 51 per cent of the world's production. India's consistent growth in the past as well as potential for higher growth - its per capita steel consumption at 72 kg is far lower than the world average of 214 kg - makes a lot of people think India can be the next China. That is a hyperbole.

"India's steel geography is uneven. Apparent steel use per capita is nearly 250 kg in Uttarakhand, many times more than in Bihar. Important steel using industries, such as the automotive hubs in Haryana, Maharashtra and Tamil Nadu, are far removed from the steel producing states of Jharkhand and Odisha, although planned infrastructure projects connecting industrial cities and sites will increase connectivity, reduce transportation costs and boost steel demand," says Edwin Basson, Director General, the World Steel Association. "For these reasons, although we expect to see growth rates of 7 per cent and higher in India in the coming years, we will see no repeat of the Chinese takeoff." 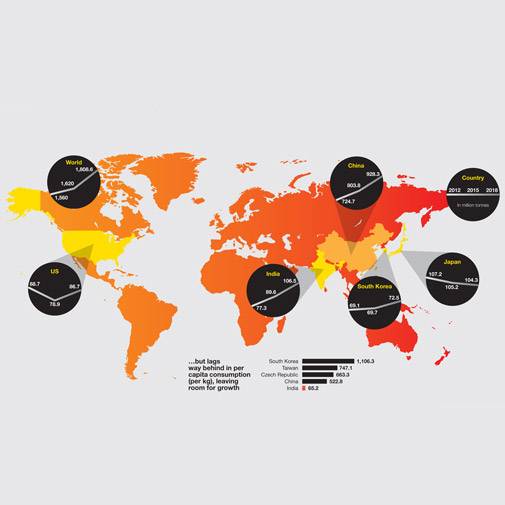 India also has its own problems that sometimes threaten to derail its growth story. Acquiring large tracts of land for setting up steel plants is a perennial problem. This shows in India's abysmal record of commissioning greenfield steel projects. Tata Steels Kalinganagar plant in Odisha, inaugurated in 2016, was the first greenfield steel project in India in more than two decades. Then there is the issue of raw material security, which cannot be assured due to the myriad set of complex rules and snail-paced bureaucracy.

That is why Korean steelmaker Posco's Odisha project and the world's largest steel maker ArcelorMittal's twin projects in Karnataka could not get off the ground. These two were the largest foreign direct investment proposals received by India. The failure puts a question mark on feasibility of targets in the new steel policy, which envisages tripling of the country's capacity to 300 million tonnes with an investment of Rs 10 lakh crore by 2030.

"Look at Posco. It wanted to put in a large amount of money but was not very certain about raw material security because of land issues and had to withdraw. Today, if we are able to offer raw material security to any company in the world, it will definitely invest here," says Anil Kumar Chaudhary, Chairman, SAIL, India's largest public sector steelmaker. "If you offer a mine to somebody for 20 years and ask him to invest for 50 years, there will be a lot of apprehension. Today people are doing it because there is no alternative."

High cost of credit and logistics are some of the other stumbling blocks. It is normal for domestic banks to charge an interest rate of 10 per cent-plus per annum for long gestation industrial projects even to companies with good credit history and proven track record. That is why, in a cyclical industry like steel, if a company gets caught in an investment spiral during a downturn when prices and net realisations are low and margins under pressure, servicing debt becomes a problem. The steel industry weathered such a storm when dumping from China between 2014/15 and 2016/17 hit profitability and led to a huge rise in steel non-performing assets or NPAs. In 2015/16, gross NPAs in the sector amounted to Rs 1.15 lakh crore.

The sector accounted for four of the 12 big firms - Essar Steel, Electrosteel Steels, Monnet Ispat and Bhushan Steel - pushed by the RBI for NPA clean-up under the Insolvency and Bankruptcy Code (IBC). The IBC has, in fact, triggered a wave of consolidation that is just getting over after re-shaping the industry. It marks the entry of ArcelorMittal, which is the frontrunner to buy Essar Steel, in India, apart from Vedanta, which bought Electrosteel last year. Tata Steel bought the lucrative Bhushan Steel to emerge as the largest steel maker in the country in 2018/19.

Tata Steel's subsidiary Tata Sponge Iron acquired the steel assets of Usha Martin Ltd. Sajjan Jindal's JSW Steel is leading the race for Bhushan Steel and Power Ltd. It also led a consortium that acquired Monnet Ispat and Energy Ltd. With bad assets out of the way and bought by companies with stronger balance sheets and higher credibility, the competitive intensity in India is set to go up. It should also lead to a surge in investment.

"The consolidation will help the industry by enabling weak companies to operate in a better manner," says Bhagyashree Bhati, Research Analyst at Care Ratings. "When companies like Monnet Ispat, Essar or Bhushan are bought by bigger companies, obviously the acquirers want them to operate at the same level of efficiency as them. It will also inspire bankers to lend." Banks will get stronger balance sheets after the NPA clean-up and should be in a position to lend again to the capital intensive steel sector, says Anjani Agarwal, Partner, EY.

The industry, with help from the governments move to increase import tariffs, successfully weathered the storm between 2015 and 2017 when dumping from China led to a loss in profitability. China's move to reduce capacity during the time also helped raise prices of the commodity in international markets. It, however, increased its capacity by almost 18 per cent between 2016 and 2018, raising fresh fears of a glut.

The intensifying trade war between the US and China, the world's two largest economies, could also add to the complexity. The US is the world's biggest steel importing country. Every year, over 25 million tonnes steel reaches its shores. China is the world's largest steel exporter at 69.34 million tonnes in 2018 and though it does not export much to the US directly - the US was its 25th biggest export market at just 7,34,800 tonnes - a growing market like India is an attractive destination for excess production. Some of it, say experts, is already landing up in India through circumvention in the form of value-added steel items like stainless steel. Import of stainless steel flat products from Indonesia, for example, shot up from 1,000 tonnes per month till last year to 10,000-11,000 tonnes per month in March and April this year. India had levied an additional import tax on stainless steel products from China in 2017. The industry believes imports from Indonesia are actually products routed from China.

India became a net importer of steel in 2018/19, the first time in three fiscals, as its exports dropped 34 per cent to 6.36 million tonnes while imports rose 4.7 per cent to 7.84 MT. Experts say there may be some rise in imports this fiscal as the US and the EU harden their tariff structure for steel from China and South East Asia but a repeat of the 2015/16 dumping episode looks difficult.

"Some minor increase in imports can be expected but it wont be substantial," says Bhagyashree of Care Ratings. "Our industry is set up primarily to satisfy domestic consumption, so we are to that extent insulated from a trade war."