The new Passat might look similar and even feel the same, but look closer and it's a brand new car with great tech.

The towels in my hotel room are blue. So are the sheets and curtains. And even the welcome drink when I arrived at the hotel yesterday was a Blue Lagoon; one part Vodka with one part blue Curaçao and three parts lemonade to produce what is one of the bluest drinks I have ever had. I guess we are taking our men-inblue's world cup win a tad too seriously here. But that's not all; the car I am driving today is blue too. Not in colour, mind you, but in technology.

The technology is called Bluemotion and it's Volkswagen's attempt at making its production of cars more environment-friendly. To the same end, the cars run on everything from more efficient engines to technologies like start-stop and regenerative braking.

Meanwhile, the wheels I'm driving-Volkswagen's new Passat-is the company's first model in support of Bluemotion technology in India. And in testimony to it's claims, the new start-stop feature takes me by surprise upon coming to the first traffic light on my route. The moment the car stops, the engine shuts. It's an eerie feeling in the beginning, but you get used to it, especially when you know this starting and stopping business is in fact helping you save fuel without your having to do anything at all.

But don't be completely taken in by the car's looks; while it looks completely new, it isn't a new generation car. Nonetheless, having said that, everything from the mechanicals and engine to the equipment list, has been heavily reworked. On the outside, every panel besides the roof-the bonnet, the doors, the fenders, the bumpers and even the lights and alloy wheels, are totally new. Making the Passat look more sleek, stylish and contemporary in design, the appearance of the exterior makes it appealing to a younger audience too. The interiors of the car haven't changed much, however. These are still well put together and plush, but look very similar to the previous models.

While the interiors of the Passat might look the same, the equipment within features a host of new innovations
Everything from the dashboard, the central console, the steering, the stereo, the climate control and also the various stalks and knobs are just the same as before.

What's new though, is the level of equipment for the Highline version I have here. The stereo for instance might look the same, but is now USBcompatible. The front seats which earlier had only a heating function, now cool the occupants as well. 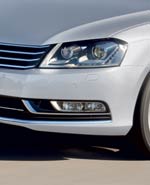 Passat is better equipped, more supple and relaxing, and looks way younger and sleeker as well.
Additionally, there are Attention and Parking Assist systems too. Attention Assist gauges any lapse in the driver's concentration and beeps to alert him/ her, while Parking Assist works, as the name suggests, by providing assistance at the time of parking your car. So, all the driver has to do is pick a parking spot, engage the system by pressing a button on the central console and the car parks itself. You still have to operate the throttle and brake, but the car twirls its steering to make the parking spot, be it in reverse or then even while parallel parking.

The new Passat is now much better suited for the Indian scenario.
And that's not all. This new version incorporates a new 1968cc, fourcylinder, common rail diesel engine which makes 170bhp and has an equally healthy torque rating of 350Nm. The end result is good low and mid-range performance that aids driving in the city and overtaking on highways. The comfort too, has been upped. Be it pot holes, bad roads or sharp bumps, nothing gets through into the cabin.

The new Passat is now much better suited for the Indian scenario and we'd pick it over the older car any day. It's better equipped, more supple and relaxing, and looks way younger and sleeker as well.