From more stringent safety and emission norms to a bigger fundamental shift towards electric vehicles, the fast growing Indian automobile industry is staring at an unprecedented churn. 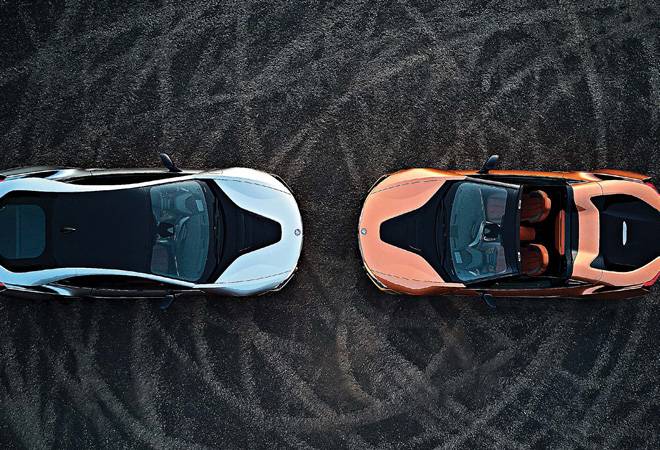 Over the last decade, the Indian automobile industry witnessed robust growth, made a mark globally and is finally doing justice to its latent potential. A mix of prudent regulatory framework that laid the foundation of India as a global hub for small cars and two-wheelers, coupled with an aggressive industry saw turnover of the sector treble from an estimated Rs 1.65 lakh crore in 2006 to nearly Rs 5 lakh crore in 2016.

Barring China, no other country has witnessed this kind of growth in a decade when the global economy was singed by the 2008 economic recession. Today, India is the largest producer of two-wheelers and tractors globally, the fourth largest car producer and among the top 10 commercial vehicle manufacturing nations. And, every third small car in the world is manufactured in India now.

Yet, the industry has only scratched the surface of the huge potential that exists. India, at just 24 cars per thousand people, compared to 500 for developed economies and a world average of 170, has a long way to go before the market begins to saturate. The government's own projections for the next decade under the Auto Mission Plan 2016-26 (see Proposed Auto Policy), sees turnover grow more than three-fold between `16,16,000-18,88,500 crore based on an average GDP growth of between 5.8-7.5 per cent. That would generate over 65 million jobs, direct and indirect, over and above the 25 million generated in the previous decade.

The journey over the next decade is not going to be easy. There are major disruptions on the way, from safety to emissions, where India is fast aligning itself with the world. Some are unprecedented. The government has already advanced the timeline for stricter BS VI emission norms that are modelled on the Euro VI norms, from 2024 to 2020, leapfrogging BS V norms in the process. Nowhere in the world has a market jumped from Euro IV to Euro VI norms directly. While this would mean significant reduction in tail pipe emissions, it entails significant investments from both auto and oil companies.

This is in conjunction with the roll-out of Corporate Average Fuel Efficiency norms earlier this month that stipulates a specific average fuel economy for the entire fleet of a company and penalties for non-compliance. While current standards are benign, they will progressively get challenging. Cars would need to be 10 per cent more fuel-efficient by 2021 and 30 per cent or more from 2022 onwards. The mileage improvement is based on how many litres of fuel is consumed by a vehicle for travelling 100 kilometres.

Similar strides are being made in the field of safety. Even today, the majority of cars sold in India do not have safety features like airbags and anti-lock brakes that are now considered mandatory in many parts of the world. This is despite the fact that more people die on the road in car accidents in India than anywhere else in the world. Between 2014 and 2016, Global NCAP, a UK-based independent body that conducts crash safety tests on cars across the world, tested 12 Indian cars including Maruti Alto, Swift, Celerio, Nano, i10, Scorpio and Kwid, among others, for safety. All of them scored a zero. 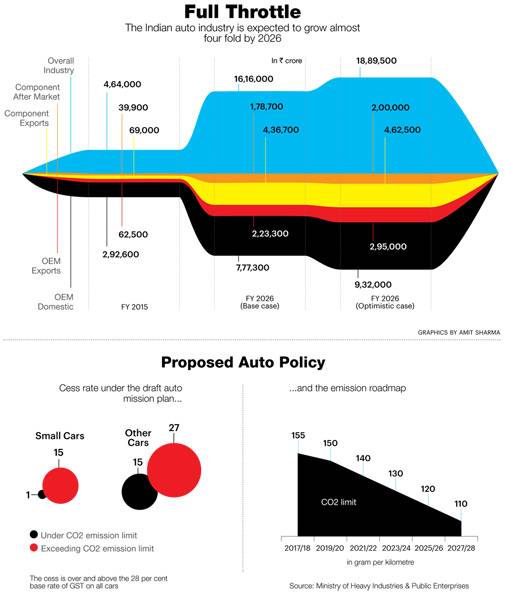 All that will change over the next few years. Already, new cars launched since last October comply with crash safety norms for full and offset frontal impact and side impact. They would eventually cover all cars by October next year. Cars would need to clear these tests at a speed of 56 km/h, which is lower than the 80 km/h European standard. The full-frontal impact test is against a rigid barrier while offset test is at a 40 per cent angle towards the driver's side. The side impact test is for deformity where a moving barrier crashes into the car at the set velocity. While the first two tests would basically mean manufacturers would have to offer airbags as standard feature, the side impact tests would ensure manufacturers use crossbeams in door structures for safer cabin structure. It would also lead to curtain airbags becoming part of standard equipment.

While that makes cars and two-wheelers safer for occupants and cleaner to the environment, it would result in an increase in prices. The Society of Indian Automobile Manufacturers has forecast an investment of `1 lakh crore for upgrading products to meet various upcoming regulations related to emissions, safety and fuel efficiency. Not all of it can be absorbed by industry.

"Everybody will have to upgrade products, so prices will go up. Initially, that could dampen demand, say the first quarter after norms are implemented, as customers would advance purchases," says Gurpratap Boparai, Managing Director, Skoda India. "But it will not have a long-term impact. Entry-level cars would lose out since costs would go up for them; it would be toughest for them to comply."

As emissions take centre-stage and dictate the future of industry, unlike affordability, utility or after sales and service in the past, the push will be towards the bigger disruption that is staring everybody in the face - electrification. The clamour for electric vehicles is growing globally and India, too, has started looking at it actively. A target for complete electrification by 2030 is being spoken about, but there is ambiguity about whether the infrastructure for charging would be ready by then. The other issue relates to whether the cost of the lithium ion battery that powers electric vehicles would decline sufficiently to make it affordable for the masses.

"The Government of India seems to have also opted for the electric vehicle option. This decision assumes that the cost of batteries used in electric vehicles will decline to half its present cost in the next few years. However, there is no certainty that this will happen. It would be prudent to have a Plan B," points out R. C. Bhargava, Chairman, Maruti Suzuki India in his column later in this issue.

"The nature of the Indian automobile market and its differences with the rest of the world indicates we should not rely on one technology alone, but consider other alternatives, too. India should move to a system where customers can choose between CNG-operated cars, EVs, hybrids and cars using ethanol and methanol. There should be no insistence on any one technology, as better results are likely to be achieved by a mix of technologies," says Pawan Munjal, Chairman and Managing Director, Hero MotoCorp. "For two-wheelers, the cost of battery is too high right now. The shift will be gradual," he adds.

The new automotive policy which is currently being drafted provides some clarity. While it does not talk about electric cars per se, it lays down stringent emission targets incentivising cars that are efficient by taxation.

"The new auto policy is a good direction because it is technology agnostic. It talks more about emission targets and lets manufacturers decide how to achieve that. Clearly, at some point in time, manufacturers will have to put electric cars on the road," Boparai says. "Today, other than Tesla, every company is losing money on electric cars. It definitely is a challenge for everybody. There is a lot of investment going into electric cars, without the certainty of demand around them. You may legislate as much as you want, but ultimately it is the customer who makes the choice."

The transition to full battery electric vehicles will be the most challenging, especially for some homegrown companies. While multinationals are preparing their strategy at a global level, which would then be adapted for India, others would have to find novel ways to tackle that. One of them is partnerships and, as in the case of Ford-Mahindra and Maruti-Toyota, it will turn erstwhile rivals into friends. As the game is reset, it will also open up opportunities for unfancied companies to capture the market.

"All the players that play these three-to-four years of transition well will have a stake and significant presence here. The disruptions like connected, autonomous and electric cars, create a level-playing field," says Mayank Pareek, Managing Director, Passenger Vehicles, Tata Motors. "Everybody is plus-minus two years - ahead or lagging. We are at the cusp of a complete transition. The changes that are happening now, have never happened in the last 100 years. It was all status quo, but now everybody is a start-up in the electric game."

"The biggest disruption will be that we have to learn how to deal with a huge amount of complexity in the drivetrain. We have to produce diesel, petrol, electric vehicles targeting about 20 per cent from our side by 2025 worldwide and also hydrogen fuel," says Roland Folger, Managing Director and CEO, Mercedes Benz India. "So instead of two, like we have now, we are going to have four to five drivetrains. A lot of companies will not be able to sustain that."

With cleaner, greener, safer and more innovative vehicles, the customer will remain the king. For the others, it will boil down to survival of the fittest.