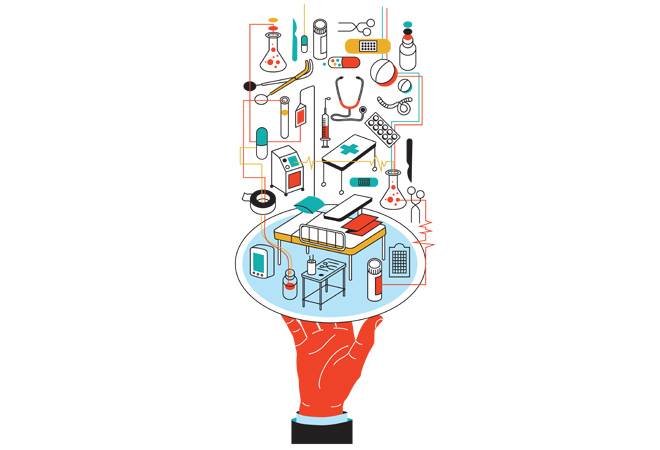 India's healthcare system has become a politically sensitive issue these days. All stakeholders are angry. The government is angry about overcharging by private players and is talking about reducing prices. The private sector is angry with the government citing low profits and margins. People are angry over the never-ending neglect of government hospitals and escalating healthcare costs.

In the last decade or so, growth in the private healthcare system was centered around expansion of primary and secondary care health establishments to Tier-II and Tier-III cities. Leaders such as Apollo, Fortis and Max kept adding new 100-200 bedded facilities one after another. Along the way, they created world-class tertiary care facilities in major cities. Over seven lakh beds were created in the private sector, apart from the 14 lakh beds in the government sector. Now, about 80 per cent secondary care and 90 per cent tertiary care is handled by the private sector. Despite this growth, the financial health of most private healthcare companies is bad due to wrong cost designs, efficiency issues and poor supply chain management. This will lead to a new wave of consolidation at the top as international chains are on the prowl for good assets, say experts.

Change is visible. The government wants to increase public spending in the sector from 1.5 per cent of gross domestic product to 2.5 per cent. The proposed Ayushman Bharat National Health Protection Scheme aims to cover over 50 crore poor and vulnerable citizens. The Union Budget last year committed Rs 1,200 crore for strengthening primary and secondary care facilities in the public sector as part of the National Health Policy vision so that existing public hospitals can handle half the healthcare requirements in future.

In the regulatory arena, the government has capped prices of stents and knee implants to bring down costs. Private players are staring at more restrictions as states like Delhi are thinking about capping prices at every level of healthcare from drugs to consumables to room rent to different procedures.

The Indian healthcare industry is now at a decisive juncture. Read our package to know what the future holds.