A national logistics policy, an integrated IT backbone, dedicated freight corridors, multimodal transport systems and a string of ports are poised to transform India's logistics sector. 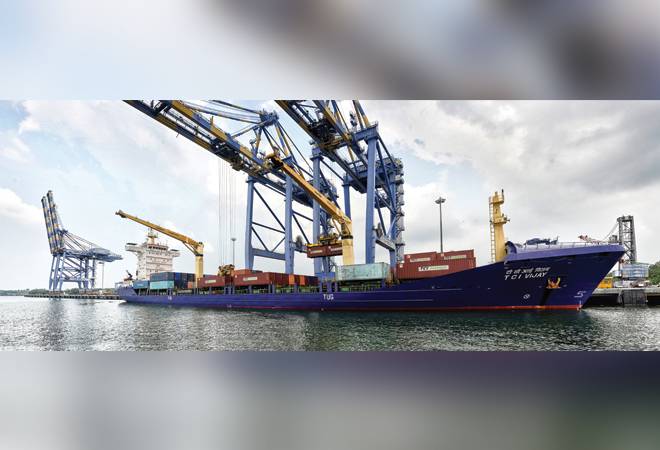 India's richest businessman, Mukesh Ambani, recently made a small acquisition. Reliance Industries bought a three-year-old logistics services technology start-up 'Grab' for Rs 106 crore with a commitment to put in another Rs 40 crore by 2021. The acquisition of the Rs 28.3-crore revenue company is expected to help in RIL's anticipated e-commerce foray.

A few days ago, industrial realty and warehousing developer IndoSpace bought a 70-acre logistics park from Orris Infrastructure on the outskirts of Gurugram. The Mumbai-based company has the backing of private equity fund Everstone Group, which last year closed its third logistics real estate fund of $1.2 billion and is increasing its total commitment in India to $3.2 billion. Similarly, logistics major Allcargo is investing over Rs 1,000 crore to set up four logistics parks in Haryana, Bengaluru, JNPT and Hyderabad. Mahindra Logistics, which launched the largest logistics sector IPO in India last year, has already made strategic investments in 2X2 Logistics - LORDS Freight (India) and ShipX - and is reportedly scouting for new acquisitions.

India's $160 billion logistics sector is brimming with action. The Economic Survey 2017/18 predicted that it will reach $215 billion (Rs 15 lakh crore) by 2020 by growing at a CAGR of 10.5 per cent. Ratings agency ICRA expects the Indian logistics sector to grow at 8-10 per cent a year over the medium term, bettering the 7.8 per cent rate of the last five years. Real estate consultancy CBRE predicts the Indian market for warehouse automation is estimated to grow by 10-12 per cent a year and touch $3.49 billion by 2020. It says leasing in the warehousing and logistics sector rose 45 per cent in the second half of 2018 to a record 24 million square feet, mainly due to the demand from e-commerce players. After the implementation of the goods and services tax (GST), 70 per cent of the leasing happened in Mumbai, Delhi-NCR, Bengaluru and Chennai. These four metros dominate the warehousing space demand with 50 per cent share; and mostly serve the new-age e-commerce companies.

The sector, which employs 22 million, is expected to be among the largest job creators by 2022, employing a total of 40 million people. Sector analysts say private investments are primarily driven by growth of e-commerce. Benefits of GST, the proposed National Logistics Policy, which envisages impetus to trade, export competitiveness and fall in logistics expenses, dedicated freight corridors and an IT-driven multimodal integrated transporting system in the making, are bound to catapult the logistics sector.

These investments have not come a day too soon. India slipped to the 44th position in the World Bank's 2018 Logistics Performance Index from the 35th rank in 2016. In 2014, it was at 54. The World Bank comes out with the index every two years based on six parameters. These are efficiency of the clearance process of border control agencies like customs, quality of trade and transport-related infrastructure like ports and railheads, ease of arranging competitively priced shipments, quality of logistics services, ability to track consignments and time taken for shipments to reach their destination. A Deloitte-Assocham study on the sector has found infrastructure-deficiency, lack of integration among stakeholders, lack of skilled manpower and slow adoption of technology as some of the reasons for the poor state of logistics in India.

Transport modes in India operate in isolation and rely heavily (about 65 per cent) on already congested roads; the railway's share is only 26 per cent. The coastal and river network are underutilised, even though water transport is energy-efficient, eco-friendly and cheap. The cost of coastal shipping is Rs 0.15-0.20 per tonne per kilometre. For railways, it is Rs 1.50, and for roads, it is Rs 2.50. Despite this, inland waterways carry only 0.15 per cent of the total cargo. Deloitte says addressing these anomalies alone can lower logistics costs by Rs 21,000-27,000 crore by 2025. 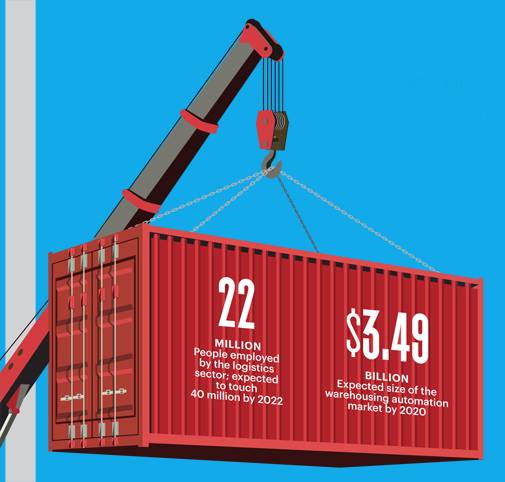 "Government logistics infrastructure projects like Sagarmala and Dedicated Freight Corridors (DFCs) have to take off from the blueprint stage and my assessment is that it will take another three-four years for this sector to blossom and attract private investments," says Sanjay Sethi, Managing Partner and CEO at Nestor Capital Consulting, a New Delhi-based infrastructure consultancy. Once the infrastructure is ready, the private sector will start investing heavily in this highly fragmented segment, he says.

The infrastructure is inadequate due to low-quality transport infrastructure, suboptimal modal mix, inefficient and ill-designed storage facilities for cargo and containers, inefficient operational and maintenance protocols and poor adoption of technology. This leads to high cargo transit time, inefficient use of resources and poor fleet management, says Deloitte. The World Economic Forum said in 2016 that digital transformation of the logistics sector could translate into $1.5 trillion value for players in the logistics sector and an additional $2.4 trillion worth of societal benefits by 2025.

Another issue is lack of skilled manpower. "There should be a pool of personnel comprising truck drivers, seafarers, warehousing managers, quality inspection supervisors, among others," says the report. Similarly, the logistics sector is slow in adopting technology. "The logistics ecosystem is fraught with operational inefficiencies and poor asset utilisation. Lack of technology systems and insufficient technical knowledge add to the pain," say Deloitte analysts.

The government plans to come out with a National Logistics Policy which envisages lowering logistics costs to less than 10 per cent of GDP by 2022 (at present, it is 9.5 per cent in the US and 8 per cent in Germany and most other developed nations), creation of a logistics IT backbone with modern IT tools such as Artificial Intelligence and Internet of Things, increase in jobs in the logistics sector and reduction in the cargo release time. Until a couple of years ago, logistics was governed by many government departments - railways, road transport and highways, shipping, civil aviation, commerce and industry, finance and home affairs. In July 2017, a new logistics division was created under a special secretary-rank officer in the Ministry of Commerce and Industry to bring the sector under a single umbrella. Last year, the Ministry of Finance granted 'infrastructure' status to logistics, with a view to help companies in the sector access cheaper and longer-term loans.

The big infrastructure projects are limping. According to the Indian Railways, the first sections of the upcoming eastern dedicated freight corridor (DFC) - from Bhadan to Khurja (200 kms) and western DFC (Rewari to Madar, 200 kms) - have been completed. According to the plan, that has been in the work for many years, the 1,500-km western freight corridor from Dadri near Delhi will connect to the JNPT port in Mumbai and the 1,800-km eastern corridor from Ludhiana in Punjab will extend up to Dankuni in West Bengal. Another plan is to have a 1,100-km greenfield freight corridor on the east coast, connecting Kharagpur in West Bengal with Vijayawada in Andhra Pradesh.

The ambitious Sagarmala programme is progressing slowly. Approved by the Union Cabinet in March 2015, more than 604 projects at a cost of Rs 8.8 lakh crore were identified for implementation during 2015-35 period under this programme. The areas identified included port modernisation and new port development, connectivity enhancement, port-linked industrialisation and coastal community development. The Sagarmala website says, as of September 30, 2018, a total of 522 projects costing around Rs 4.32 lakh crore were under various stages of implementation, development and completion. Of these, only 93 have been completed at a cost of Rs 14,997 crore, it adds. Another 161 projects costing Rs 2,37,980 crore are under implementation.

Experts point out that as of now the private sector lacks interest in both mega logistics projects such as freight corridors and Sagarmala and balance sheets of government-run companies are not strong enough to fund such mega projects. But the National Logistics Policy and recent initiatives in the sector are sure to help the Indian logistics industry drive forward smoothly in the near future, they say.