For nearly two years, real estate lobbies have been praying for a white knight. Residential developers in India need last-mile capital to finish large projects as nearly six lakh units are stuck in various stages in the country's top cities. On November 6, the Union Cabinet agreed to build a fund whose corpus could add up to Rs 25,000 crore. The fund would provide priority debt financing for stalled affordable and middle-income housing projects, raising hope that the residential real estate segment - characterised by lack of trust and confidence in developers due to delivery defaults - could finally see some light at the end of the tunnel. Oversupply of high-end projects added to the woes.

But there is another side to India's real estate coin. Commercial, or office, real estate is booming. The supply is steadily increasing. So are the absorption rates. Vacancies at top-grade buildings are down while rents in many markets have risen. Unlike the residential side, the office market is characterised by transparency, and in most cases, timely delivery.

Although new completions of Grade A (highest quality) spaces started falling in 2015, there was a significant increase of 40 per cent in 2018, compared with the previous year. The number is expected to rise 13 per cent to 43.3 million sq.ft. in 2019, says a recent report by ANAROCK Property Consultants. "The rise was majorly due to limited availability amid high demand. Similarly, net absorption rose 16 per cent from 29 million sq.ft. in 2017 to 33.5 million sq.ft. in 2018. It is likely to increase 11 per cent in 2019. The major cities of India are expected to witness strong absorption along with rising supply in the coming years," says the report.

Other industry watchers also expect continued growth in absorption. "There is limited ready-to- move-in supply in major markets. If a tenant is looking at a 350,000-400,000 sq.ft. sort of expansion, there is limited availability," says Ram Chandnani, Managing Director, Advisory & Transactions Services, CBRE India - a real estate services company. "If tenants want larger - about half-a-million sq.ft. - space, they are pre-committing to a developer who is going to start work now," he adds. 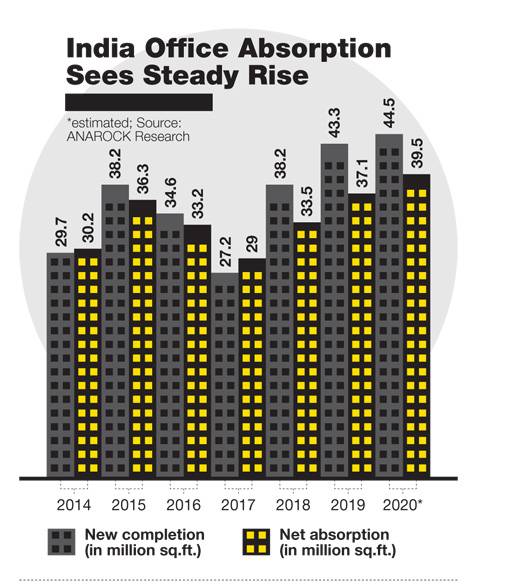 The vacancy rate has dropped, too, from 16.5 per cent in 2013 to 14.6 per cent in 2018. It is expected to fall further in 2019. The strong demand for offices together with low vacancy rates have led to decent rental growth in Information Technology (IT/ITeS)- dominated cities such as Bengaluru, Hyderabad and Pune, says real estate services provider JLL India. Office rentals grew more than 5 per cent in the third quarter of 2019, compared to the year-ago period.

What makes this growth impressive is the fact that India is in the middle of a slowdown. What explains this? And will this momentum continue over the next few years?

The 30,000-feet view is that the depth of India's economy will continue to drive its commercial real estate. In 2019, India became a $2.7 trillion economy; it wishes to touch $5 trillion by 2024/25. "A low-income nation is becoming a middle-income nation. A $5-trillion economy implies investments. It means more industries, better labour management, better infrastructure. That means demand for office space," says Rajeev Talwar, CEO of DLF and Chairman of industry body National Real Estate Development Council (NAREDCO). He adds that growing ease of doing business and integrity coefficient of the government, as perceived by people, have boosted foreign direct investments, leading to an uptick in demand for commercial spaces. DLF is India's largest real estate developer.

Niranjan Hiranandani, Managing Director of Hiranandani Group and National President of NAREDCO, explains the current boom through the lens of stock markets. "If the stock market is looking up, commercial real estate will look up, too. There is a great linkage," he says. Around November 8, 2017, the BSE Sensex was around 33,218 points. By November 8, 2019, it had climbed to 40,323. "Two, the corporate tax rate has been cut to 25 per cent, and for new businesses, the rate is 17 per cent (for companies incorporated on or after October 1, 2019, making fresh investment in manufacturing). Businesses, therefore, will continue to grow," he adds.

While low-tax rates are enablers, some of the historical drivers of commercial real estate in India have not changed. One, India is a talent hub, and companies across the world want to hire its relatively cheaper workforce. From low-end voice-based business process outsourcing services, India has now graduated to more high-end services such as analytics. And few countries give multinationals the scale that India does. "We are not seeing the fundamentals driving the need for office spaces being disturbed because of the slowdown. International companies which move to India look at it as an incredible talent source. They can't really find this in other markets," says Aditya Virwani, COO of Bengaluru-based Embassy Group - a developer. "The cheap talent that you get here is unmatched. There is a health care company that is consolidating from the Philippines and taking space with us. Nowhere in the world can they hire 700 PhDs and scale it up to 3,000 in the next five years," he says. Much of India's office market is, therefore, catering to international corporates or those focussed on export of high-value services. The export-oriented demand has offset the slowdown in some domestic industries. This is primarily why the commercial real estate sector continues to grow in 2019. "In the last five years, we have seen a lot of European companies entering the Indian market. Korean, Japanese, Taiwanese, and Australian firms are also looking at India in a big way," says CBRE's Ram Chandnani. And companies already with a presence in India are expanding. In July, DLF sold nine acres to American Express for setting up its office campus in New Gurugram for Rs 33 crore an acre.

A recent CBRE research found that technology companies are now a major driver of real estate, not just in India but also in other parts of the Asia Pacific. "Technology firms accounted for 23 per cent of leasing activity in 2018 in the Asia Pacific. They have constructed over eight million sq.ft. of new headquarter space over the past two years," says the report. "Tech companies are increasingly seeking locations that provide ecosystems capable of accommodating best-in-class tech giants as well as start-ups and unicorns specialising in innovative products," it added. The report identified Asia Pacific's leading tech cities by assessing 15 markets according to their business conditions, innovation environment, cost and availability. Leading cities of the region included Beijing, Bengaluru, Shanghai, Singapore and Gurugram.

No doubt, within India, Bengaluru's rise - first as the IT services capital of India and then as a start-up hub - has fuelled hectic commercial real estate activity. A JLL-CII report says Bengaluru's position as the top city driving the office market remained unchallenged with net absorption of 6.5 million sq.ft. in the first half of 2019. "Interestingly, Hyderabad saw a significant surge in net absorption, almost four times, from 1.5 million sq.ft. in H1 2018 (first half of 2018) to 5.8 million sq.ft. in H1 2019. This was led by strong expansion of IT/ITeS, BFSI and co-working occupiers amid strong business sentiments," said the report.

Manish Aggarwal, Managing Director, North & East, JLL India, told BT that about 37 per cent demand for commercial real estate is being generated by IT/ITES companies. About 15 per cent is coming from co-working spaces. Many established technology companies and start-ups use co-working facilities offered by nearly 300 providers in India as they provide greater flexibility. Investing in own facilities involves an opportunity cost as it takes time to buy/lease and then fit out the facility. Co-working enables one to just move in with laptops and start working. Companies can add or reduce the number of seats depending on need.

Aggarwal says the office market has remained buoyant as the technology sector hasn't seen any slowdown in the last two years. Although some of the IT industry's bigger companies had a mixed year, the IT/ITeS industry, overall, ended up hiring 170,000-175,000 people in 2018/19. In the first quarter of 2019/20, the industry hired about 85,000 on a net basis. The current year appears to be better than the previous in terms of employment, says a representative of IT industry body NASSCOM. "BFSI has taken a hit in the last eight-10 months, but besides that there is robust demand. Second, many companies are looking at consolidation," says Aggarwal. Large start-ups and e-commerce companies, for instance, had multiple offices and are now consolidating to become more efficient. "This has led to growth in demand. The initial spaces they had taken were low on specification and cost. Now, many have consolidated to good Grade A properties," he adds.

International companies and Indian technology firms are fuelling another trend. They prefer larger commercial parks rather than standalone buildings. There are good reasons why.

Mike Holland, Chief Executive Officer, Embassy Office Parks REIT, says as companies are trying to attract talent, they want to be in an environment that provides employees not just basic office space but a business lifestyle. "The demographic is mid-20s and early-30s. We, therefore, have a lot of sports zones in our business parks. We have a food court, amenities for working moms and health care facilities. That pushes the industry to larger scale kind of proposition. It is not enough to provide a small-scale building," he says. International companies are also serious about safety, compliance and governance, and look for developers who follow international standards in these aspects. This needs scale. Also, business parks have a long gestation period. So, access to capital is important. To build a 100-acre park, for instance, a developer has to first buy the land, a major exercise. This can take anything between three and 10 years. Delivering the first phase might take another three years. "The whole park can take 10-15 years to reach maturity. That is why such projects need patient capital. Most larger players, therefore, have institutional capital or relationships," says Holland.

As per ANAROCK research, commercial office space saw PE inflows of $10 billion-plus between 2015 and third quarter of 2019. The retail segment saw investments of over $2 billion. Logistics and warehousing saw inflows of $1.2 billion during the period.

"In value terms, US-based Blackstone, Canada-based Brookfield and Singapore-based GIC are among the leading PE players that have invested in Indian real estate since 2015," says Shobhit Agarwal, MD & CEO, ANAROCK Capital. GIC invested about $1.4 billion in DLF in 2017; Brookfield invested $1 billion in Hiranandani group in 2016; Blackstone invested over $850 million in Indiabulls Real Estate in 2019.

Blackstone, meanwhile, has emerged as India's largest office landlord, owning 115.1 million sq.ft. As of October 2019, it had invested $7.7 billion across 35 transactions in the Indian real estate market. Of this, $2.5 billion was invested in 2019 alone. Of the $7.7 billion, about $6.5 billion has been invested in commercial office space.

The bottom line is that developers with PE backing have the staying power and the ability to supply the right product is getting concentrated in fewer hands. This is one huge reason why the mess of residential real estate - surplus supply - is unlikely to surface on the commercial side. It is a big boy's playground.