Out of the Woods

SAIL has turned around after 10 consecutive quarters of losses. But it needs to do much more to stay relevant in future. 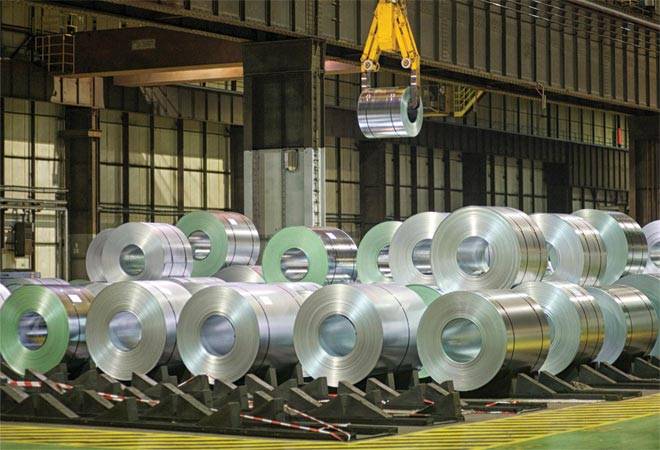 As Steel Authority of India Ltd. (SAIL) chief Prakash Kumar Singh gets ready to hang up his boots, he would be wondering if he was the most star-crossed head of the maharatna PSU in its 45-year existence. Singh would be the only chairman of the firm to not report an annual profit in his tenure. He retires in June after a 38-year stint at the steel giant, after rising through the ranks to reach the top in 2015. If SAIL stays in black in the last quarter of 2017/18 and this quarter - the first of fiscal 2019 - the company would have been in the red in seven of the 10 quarters that Singh has helmed. This record is unflattering, but he is not completely at fault as he inherited a company that was already in the red - since April 2015, three quarters before he took over. The main reasons for the company's distress lay elsewhere.

The recession in the global steel industry in 2015 due to an unprecedented oversupply in China led to a steep fall in prices of the commodity, adversely impacting the profitability of steel companies. India also became a victim of dumping, with imports growing by a staggering 71 per cent in 2014/15. At its peak, 11.71 million tonnes were imported in 2015/16. This led to a steep decline in domestic steel prices that hit a low of under Rs 27,000 in January 2016. Low prices meant less net realisation for steel companies and a squeeze in their profit margins. The worst period was between October and December 2015 when the industry logged a cumulative net loss of Rs 6,317 crore and a net margin of -20.11 per cent.

"It was a bad time for everybody, not only in India but across the world," says Bhaskar Chatterjee, Secretary General at Indian Steel Alliance. "Capacity utilisation in factories went down. It was also a time when the fundamental strength and weakness of companies was exposed." Despite the global disturbances, SAIL should have performed better than the industry, considering the state-run entity is bolstered with huge land banks and raw material linkages. The company's entire iron ore requirement, a key raw material in steel making, is met through its captive mines. In 2016/17, its mines produced 26.44 million tonnes of iron ore. Its requirement of coking coal is less secure, but even there 19 per cent of its needs is catered to by its own collieries and the supplies by another domestic PSU, Coal India Ltd. Along with Tata Steel, it distorts the level playing field in the country.

Yet, there are significant challenges that confront the firm. Its product portfolio is skewed towards low grade steel that do not fetch high margins and are subject to higher cost pressures. At the same time, with nearly 83,000 employees on its rolls, the company is supremely flabby. Salaries and wages account for a fifth of SAIL's net sales turnover. Compared to its peers, it cuts a sorry figure.

JSW Steel, which overtook SAIL to become the largest steel producer in the country in 2016/17, produces more steel - 15.8 million tonnes in 2016/17 - with far fewer workers - under 12,000. For JSW, salaries and wages are just 2.3 per cent of its net sales. This is how it makes up for more than what it loses due to its lack of captive iron ore or coking coal mines. SAIL also lags behind its peers on almost all major techno-economic parameters used in the industry to judge the efficacy of operations. Its coke rate at 473 kg per tonne of hot metal (thm) in 2016/17 is an improvement over 512 kg/thm of 2012/13, but still some way off Tata Steel's 360 kg/thm. In the same way, its overall energy consumption at 6.6 Gcal/tcs (giga calories per tonne of crude steel) is an improvement over 6.68 in FY 2012, but higher than 5.67 Gcal/tcs at Tata Steel's Jamshedpur steel plant.

These structural weaknesses are why SAIL recovered from the after-effects of dumping long after the others. A comparison between the finances of SAIL and JSW corroborates this point. The two companies were deep in red in 2015/16 but the introduction of minimum support price in February 2016 and the subsequent decline in imports saw a quick turnaround in the fortunes of the private steelmaker. JSW's net profit soared 52 times in the first quarter of FY 2017 against the previous year and revenue grew 2.2 per cent. SAIL, on the other hand, saw its net loss widen to Rs 535 crore in the quarter against Rs 248 crore of FY 2016.

It had to wait till the third quarter of FY 2018 to script a turnaround despite becoming profitable operationally in the middle of 2016. For the first nine months of FY 2018, JSW Steel and Tata Steel have a net profit of Rs 2,390 crore and Rs 3,138 crore, respectively, against SAIL's net loss of `1,297 crore. The full turnaround has not come easy. Singh himself toured all the firm's factories often engaging with workers directly through the year. "We assumed a four pronged approach to bring growth momentum back and get things moving with cost cutting, employee strength rationalisation, better product mix along with many small yet significant changes in the entire process," he says. "We focussed on improving operations, reorienting our marketing strategies and approach, better management of finances and capitalising our human resources." 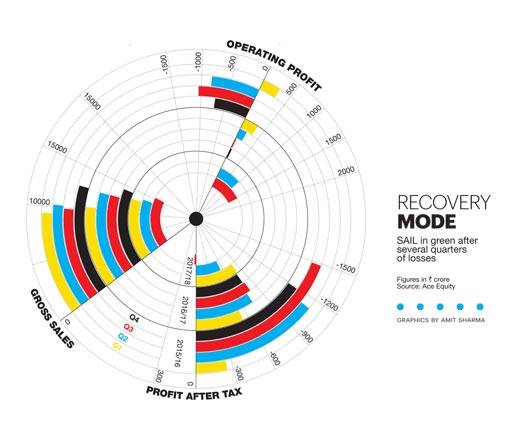 Efforts to attain the turnaround had begun some time back, Singh informs. "We had focussed targets to ramp up production from new units, effectively utilise the older units, manage cash prudently and lower our inventories. We want to engage our manpower gainfully. The subsequent quarters will see further improvement in every aspect of growth."

SAIL's lack of cutting-edge technology has been cited as its biggest problem. This even as it spends more on research and development than its private competitors. In FY 2017, SAIL spent `339 crore on R&D compared to Rs 145 crore by Tata and just Rs 25 crore by JSW. To overcome this handicap, it has tried to collaborate with major global steel firms keen to get a toehold in India, but red tape has been a deterrent. Talks with Korean steel firm Posco for a collaboration has failed twice in the past. Similarly, progress has been slow on the proposed joint venture for auto grade steel unit with ArcelorMittal, the world's largest steel company. The MoU was signed back in 2015, but the project is yet to take off. The delays underline how the firm's decision making is constrained by snail-paced bureaucracy, a perennial problem with PSUs in India.

"We are one of the oldest steel makers in India and constantly invest in technology upgradation through installing new and technologically advanced systems and also upgrading our existing machinery. The Bhilai Steel Plant boasts of being the world's only producer capable of making single longest 130-mt rail tracks," Singh counters. "We have signed a legally non-binding term sheet with ArcelorMittal for formation of auto-grade JV. Discussions on definitive agreement will be finalised in due course, once the process of feasibility study and its approval is completed by both companies."

In future, SAIL would also have to fundamentally relook its cost structure. Under the new rules for mining, SAIL will not have its captive mines forever and will have to eventually bid for them at some point of time. This could mean a significant increase in its costs. Singh is certain that as SAIL navigates these challenges, its very fabric will change. "We have to be more efficient and the intention should be towards making more profit. We should become a commercial organisation," he had said last year. "There has to be a shift from being a socio-commercial organisation to a purely commercial organisation. Except for a few mines that we have, we do not have any other advantage and are in direct competition with the private sector in every way. When the mines are also taken, our working should also become purely commercial."

SAIL may have successfully weathered the storm in the last two years, but for a more secure future it needs to continually reform itself. Singh can, at least, claim he leaves the company in much better shape than how he inherited it in 2015. His successor won't see red ink on the balance sheet on the first day in office. That must mean something.