The second-generation private insurers try innovative strategies to make a mark, as profitability becomes more crucial than ever before. 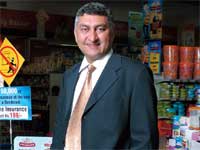 There are worse things in life than death. Have you ever spent an evening with an insurance salesman?” Woody Allen is supposed to have made that famous remark about the tribe of insurance salesmen. Many Indians bred on the archetypical insurance agent could not agree more.

When the first wave of private players started invading the market around 2000, the insurance market grew by leaps and bounds (see chart) and so did this unloved species—the insurance agent. Attracted by the enormous growth potential of the market, several other players have entered the market in recent years. And more are poised to tap into one of the two high-growth economies of the world.

For many of the fresh entrants, getting rid of this stereotype and making inroads into the customer’s mindscape have been an uphill task. No surprise then that many of them mouth the mantra of “differentiation”, whether in products or the distribution channel.

Consider Future Generali Life, the joint venture between the Future Group and Italy’s Generali Group. Its “mallassurance” model seeks to convert the footfalls to the malls owned by Future Group into potential clients. “We offer low-ticket, lowinvolvement insurance products to customers at malls for as low as Rs 99. We then go back to them later to cross-sell and up-sell other products,” says Jayant Khosla, MD & CEO. Though the conversion rate for mall clients is only 4-5 per cent, the new channel, nevertheless, is a fresh way of selling insurance.

Bharti AXA Life, a JV between the Bharti Group and French conglomerate AXA, follows a similar strategy. It uses the large, walk-in population at the Airtel Relationship Centres and Bharti-Wal-Mart stores to push simple, over-the-counter products.

For many of these companies which are venturing into the market in sober times, profitability has become more important than market share. And this has meant burrowing deep into specific markets. Shriram Life, a JV between Shriram Group and South African insurer Sanlam, intends to focus on the tier II and tier III cities, moving beyond its traditional southern markets. 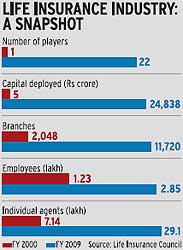 “There is a lot of noise in tier I cities where everyone is playing,” says Gerhard Joubert, CEO, NEW (North, East, West). He expects the market to grow to $52 billion by 2010, and clock a compound annual growth rate of 30 per cent every year.

Up north, DLF Pramerica, a JV between American insurer Prudential and DLF Ltd., aims to focus on markets in Punjab, Haryana and the National Capital Region. And even in terms of the products, the differentiation is creeping in. While DLF Pramerica plans to focus on protection products, others such as Future Generali will launch products catering to women and rural segments over the next few months.

The impact of detariffing in general insurance market, coupled with the impact of the financial crisis, has meant a change of plans for general insurers as well. Raheja QBE had decided to remain in just the corporate business segment and tethered to Mumbai. Bharti AXA General Insurance’s COO Kimsoon Chua says their new strategy focusses on retail besides the original intent on the corporate segment.

A crowded, tougher market has increased the importance of costefficiencies. Timothy E. Feige, Co-President, Prudential International Insurance, partner in DLF-Pramerica, says quite candidly: “We never have the goal to be the biggest in any of our markets. Our goal is to be the highestquality company. India is a market which honours market share very highly. It will be a long time before we show up on the charts.”

For AEGON Religare Life Insurance, that translates into moving to automated systems from Day 1 for sales compensation or underwriting. K.S. Gopalkrishnan, CFO, says: “Our emphasis is on branch profitability and not merely on trimming start-up expenses.” The recent capping of charges by the IRDA on some products is yet another push towards greater cost savings for the new players.

Edelweiss Research, however, believes that bank-backed insurers are at a significant advantage due to optimal distribution cost. Many of the new players represent marriage of public sector banks, which have a wide reach, with foreign partners that, in turn, have expertise and product innovation skills in developed markets. These include the likes of IDBI Fortis Life Insurance, a JV between IDBI Bank, Federal Bank and European insurer Fortis. G.V. Nageswara Rao, MD & CEO, IDBI Fortis says, “As the 18th entrant in the life insurance market, it was clear to us from the outset that we cannot be doing what the others had been doing.” The company’s main focus has been on lower prices, coupled with higher volumes. It collected premium of Rs 318 crore in the first year of its operations, which, Rao says, is more than that done by any other company in its first year.

Canara HSBC Oriental Bank of Commerce Life Insurance Company vaulted to the top 10 in its first year on the strength of its distribution. Another insurer of bank parentage, Star Union Dai-ichi, a JV between Bank of India, Union Bank of India and Dai-ichi Mutual Life, aims to be the fastest- growing insurer making use of the pelntiful branches of its parent banks.

But as Praveen Vashishta, CEO & MD, Howden Insurance Brokers India, says, “The evolution of the business models is true to the theoretical framework. In heavily-regulated markets, players chase market share. Along the curve, risk management becomes more important. This is a paradigm shift and it has already happened. However, the focus on the customer has yet to come in.” That better come in soon. Till then, India affords space to many insurers.