And the winner is... Reliance

The fifth BT-Cirrus survey reveals which CEOs, companies and groups got the best press in 2007. Mukesh Ambani's Reliance Group emerges as the leading newsmaker. 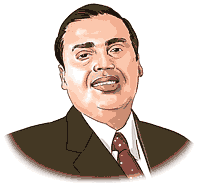 Mukesh Ambani
What is it that separates the leading newsmakers from others? And why are some companies more in the news than their peers? Different companies are, or remain, in the news for different reasons— the most common being high profile takeovers, product launches and partnerships, glittering results or large expansion plans.

So, it should come as no surprise that the BT-Cirrus survey of the biggest newsmakers of 2007 threw up Mukesh Ambani’s Reliance Group as the biggest of them all. Everything he, and his group, does makes news, mostly on the basis of sheer scale. In 2007, it was more and more of the same. During the year, Reliance Industries continued to make fresh gas discoveries in the Krishna-Godavari Basin. For good measure, it even struck oil there for the first time. Then, it relaunched its Vimal brand amid much fanfare and merged IPCL into itself during the year. And finally, it delivered big numbers where it really counts—on its bottom line. For the half year ended September 30, 2007, its net profit rose 31 per cent to Rs 7,467 crore on the back of a 9 per cent increase in revenues to Rs 64,692 crore, signifying an improvement in margins.

But, like last year, the quality of exposure (QE) was not in keeping with its top billing in terms of visibility (which is a function of the size of the article, its position in the publication and the readership of that publication) and image (determined by the tone of the coverage: positive, negative or neutral). Its score here, of 151 is way below those of others like Tata Sons (Rank: 54, QE: 179), A.V. Birla Group (Rank: 55, QE: 179) and, most notably, the Anil Dhirubhai Ambani Group (Rank: 28, QE: 177). Companies are ranked according to their image score.

The younger Ambani’s group received highly laudatory media coverage for a host of issues: Reliance Communications’ payment of Rs 1,651 crore as GSM entry fees to the government, the group’s winning of the 4,000 MW Sasan ultra-mega power project, R-ADAG’s m-cap crossing the Rs 1 lakh crore mark, the emergence of the group’s mutual funds business as the largest in the country and Ambani Jr’s election as the Business Icon of the year in a poll conducted by India Today. Incidentally, group company Reliance Communications, at #18, scores higher than the group as a whole.

Another interesting point of the study is that Vodafone has leapfrogged from #174 in 2006 to #9 in the year under review. This is understandable; the company had no presence in India (save a 10 per cent stake in Bharti Airtel) till it took over Hutchison Essar in a very high profile bidding war in 2007. Hence, its improved performance.

The aviation sector saw a lot of action during the year under review. The UB Group, the promoter of Kingfisher Airlines, took over Air Deccan, and the subsequent statements of Vijay Mallya sparked off speculation that this development marked the end of the low-cost experiment; thankfully, for millions of middle class flyers, such anticipatory obituaries have proved premature.

Then, the government announced the merger of Air India and Indian; and Jet Airways declared a small profit. No wonder that the aviation sector is present in such strength in the Top 20.

Ratan Tata
DLF remained in the news through much of the year for a variety of reasons. The year 2007 began with speculation about the fate of its sometimes controversial initial public offer (IPO) that finally opened in June and mobilised Rs 10,500 crore, a record at the time. Two other real estate companies, Unitech and Parasvnath Developers, which weren’t present on the 2006 list, have made it to #63 and #65, respectively, mainly on the basis of the massive projects they announced during the year.

Infosys Technologies, too, remained in the news and maintained its position as the most newsworthy Indian IT biggie, though two other technology companies, Google and Microsoft, both MNCs, received greater coverage during the year.

That’s actually a tribute to the increasing depth of coverage in the Indian media. Many unrelated news items these days carry quotes from senior consultants at these, and other consultancy firms to provide greater perspective. Starting this year, our study captures even these small mentions; hence, the increase in their visibility.

Ravi Venkatesan
It’s a fair assumption that bigger companies usually get greater coverage. But there’s a major churn, especially in the middle rungs of India Inc. This is captured by the fact that the media covered more companies that feature lower down in the mass consciousness. As many as 43 of our Top 200 companies are newcomers to the list; that’s 21.5 per cent of the relevant universe.

The distribution of these newcomers is interesting: there are only seven in the Top 100; the highest ranked newcomer is Morgan Stanley, at #35. But as we go lower down the rankings, their numbers grow—there are as many 36 first-timers on the list between ranks 101 and 200.

Arun Sarin
This just another pointer to what everyone has been talking about: there’s a lot of dynamism in the middle reaches of India Inc. and several smaller or newer companies are vying for attention and fighting for market share in their respective industry segments.

That being the case, expect more of a churn in the months ahead, but we’ll be able to get you concrete data on that only next year.