The Future Is Here

Tap, click and swipe - these are the new sounds of money. Modern technology is fast replacing paper with computer files, bank tellers with automated teller machines (ATMs) and file cabinets with server racks, And banks too have come a long way from the old days of manually recording transactions in registers and tallying them up at the end of the day.

Bank branches, the interface between banks and customers, have also changed drastically from being operations-centric to servicing clients. The shift during this period has been from branch to alternative delivery channels such as ATM, Internet and mobile," says T.M. Bhasin, Chairman and Managing Director, Indian Bank, and author of E-commerce in Indian Banks.

"We are seeing more and more people shifting to alternative delivery channels which account for nearly 30 to 40 per cent of customers at present. Over the next few years this is likely to go up to 70 to 80 per cent," says Bhasin

The rupee was devalued by 30.5% in 1949 after other 'sterling area' countries lowered their exchange rates.

ICICI Bank, the country's second largest bank, has seen a big jump in transactions outside the branches. Chanda Kochhar, MD and CEO of the bank, says only 15 per cent of transactions on average take place through the branches. "The rest are happening outside," she says.

ATM is the oldest of the alternative banking channels and enjoys the highest level of acceptance among customers. The number of ATMs in India has doubled in the past three years. Currently, there are more than 100,000 ATMs, around 70 per cent of them in urban locations. Global research firm Celent expects the number of ATMs to double by 2016, with more than 50 per cent of the new machines going to small towns.

Banking is also changing due to the efforts of the Reserve Bank of India (RBI) to inculcate the habit of paperless payments through credit and debit cards, electronic fund transfers and mobile banking. While cheque is still the dominant mode of payment, the value of such transactions has been on a gradual decline between 2007/08 and 2011/12. Paper-based payments accounted for 52.4 per cent of non-cash transactions in terms of volume, but only 8.4 per cent in terms of value.

Mobile phones are seen as a big enabler of electronic payments as the costs are low. Mobile transactions have increased in the past few years, but the use of mobile banking services is quite low. Most of the transactions carried out using mobile phones are non-financial in nature. "The potential of mobile banking technology is yet to be fully exploited," says G. Padmanabhan, Executive Director, RBI. 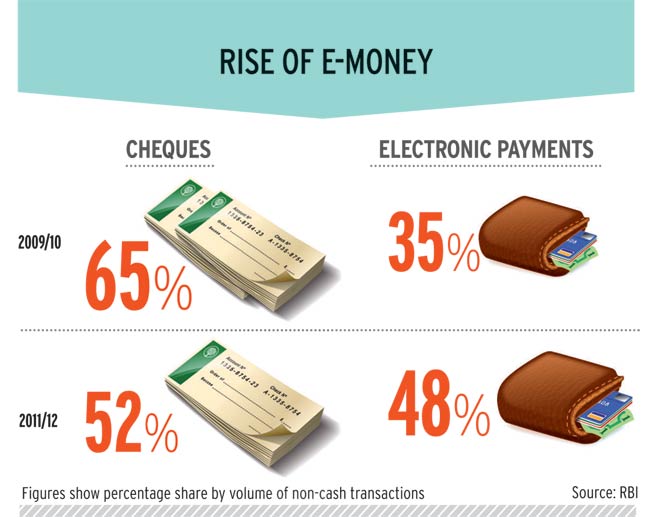 Technology is not only making banking convenient for customers, it has also allowed banks to expand their businesses faster. The cost of servicing a client is highest at a branch followed by ATMs, online and mobile phones.

When a customer walks into a branch to withdraw money, the cost to the bank may be as high as Rs 200 whereas an ATM transaction would cost around Rs 20 or even less, says Shyamal Saxena, General Manager, Integrated Distribution, South Asia, Standard Chartered Bank. Economies of scale will only bring down the cost further. "There is a tendency to discourage customers from visiting branches since it is both inconvenient for customers and adds to the cost of the bank. Moving to alternative channels is a win-win for both sides," says Indian Bank's Bhasin.

Banks are also discouraging direct interface with customers by levying charges for some transactions such as payment of credit card bills through cash o r depositing cheques at bank counters instead of putting them in drop boxes.

Technology-based banking has also reduced the space required to set up bank branches. "Earlier, the physical infrastructure needed for a branch was, on an average, around 4,000 to 5,000 square feet. Now, we are managing with an average of 1,000 to 1,500," says Bhasin.

However, modern electronic payment systems are still concentrated mainly in metros and large towns (Tier-I and II locations). A large chunk of the Indian population still does not have access to formal banking channels, let alone the new alternatives. According to RBI, there were around 147,000 bank outlets for more than 600,000 villages in India. Some banks though are using the business correspondent model (where a third party serves as the interface between a bank and its customers) to expand their reach and bring more people under formal banking using technologies such as hand-held devices and micro-ATMs.

With mobility and customer convenience seen as keys to growth, banks are busy exploring new technologies. Experiments with near-field communication technology (where the transaction is completed by simply bringing a hand-held device or a phone in contact with a terminal) have failed to provide a mass-scale payment solution, but the industry is buzzing with terms like cloud computing and mobile solutions.

Similar to the central customer identification system (Know Your Customer, or KYC) used by mutual funds, a common database may soon do away with the need for physical verification of new bank customers. Banks have already been asked to issue unique identification numbers to their customers as the first step towards a centralised KYC directory.

Even so, branches are unlikely to die, despite ATMs, laptops and smartphones becoming primary platforms for daily banking. Branches will continue even after the new modes spread to rural areas. The experience of advanced economies with high volumes of electronic payments confirms this.

"In-branch banking is never going to be out of fashion. However, branches will eventually handle just sales with banking services being taken care of by alternative channels, at least in urban centres," says Pralay Mondal, Senior Group President, Retail and Business Banking, YES Bank. Besides, the human touch matters.

"As a banker, I would love to have a customer visit our branch because that allows us to build a better relationship through active engagement with him and promote our services beyond basic banking." ICICI Bank's Kochhar agrees, saying interaction with customers at branches is essential for bank executives to spread awareness about various products and services on offer.

Even as technology transforms banking as we know it, branches will continue to play a crucial role in moulding the industry.

Why foreign banks are in a rush to enter India