A brief look at those who topped in various categories.
Team BT | Print Edition: January 18, 2015 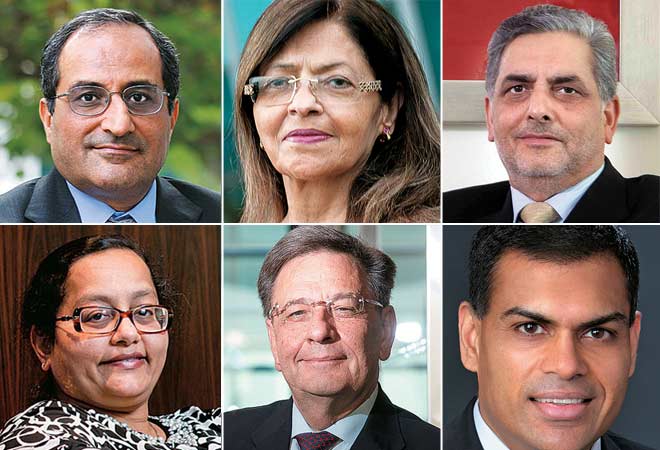 Snapshots of winners in different categories.

Kalpana Morparia, India CEO, JP Morgan Chase
Even when the economic scenario in the country was gloomy and foreign investors were bearish on India before the Narendra Modi-led government came to power, US-based J.P. Morgan continued to engage with its MNC clients as well as India Inc. "I would say [that] in a challenging period, we are pretty satisfied with the results the bank has achieved," says Kalpana Morparia, CEO, J.P. Morgan India. In the category of small banks, the bank has the highest return on assets at 2.85 per cent for 2013/14. The return on capital employed is also high at 13.20 per cent. The operating profit and fee income grew by 23.42 and 12.52 per cent, respectively. At 0.14, the cost-to-income ratio is the lowest among foreign banks. Its capital adequacy ratio, at 25.58 per cent, is much higher than the RBI's mandated nine per cent.

J.P. Morgan was also at the forefront of fund-raising efforts by Indian companies. In the largest qualified institutional placement ever by an Indian company, J.P. Morgan helped State Bank of India, the country's largest bank, in raising $1.27 billion in January 2014. In the international debt market, J.P. Morgan worked with Bharti Airtel and Vedanta to raise close to $3 billion. "The debt market has been particularly good this year [2014] and last year [2013]. This is because of ample liquidity in the US," said Morparia.

J.P. Morgan also worked as a joint advisor to US private equity fund Kohlberg Kravis Roberts (KKR) in its acquisition of a controlling stake in Alliance Tire Group. Besides, it advised Fortis Healthcare International in the sale of Quality Healthcare to Bupa International.

According to Morparia, India is in a sweet spot for two reasons. First, the change in sentiment, driven by the new government. "People perceive this government to be reform oriented. Even more important than structural reforms [is] the fact that the government will be able to clear some of the policy logjams..." The second reasons is the performance of other emerging markets, especially the slowdown in China. "India stood out like a rock of stability," she says. "We tended to get a disproportionate share of emerging market flows."

Arun Kaul, chairman & managing director, UCO Bank (Photo: Subir Halder)
When Arun Kaul took over the reins of the state-owned UCO Bank in September 2010, it was a loss-making outfit. "A major part of the 1990s saw losses," he says. The current and savings account (CASA) ratio was low, asset quality was below average and its ageing workforce was not in sync with technology.

Kaul focused on expanding the retail business and pared the share of wholesale banking to less than 40 per cent from 75 per cent. Today, about 2,400 ATMs across the country service 49-50 lakh retail customers. CASA has now swelled from about 21 per cent in 2010 to 32 per cent. The Kolkata-based bank also kept its cost-to-income ratio under control. Enhanced use of technology and lower staff count further improved productivity and efficiency. These measures also helped the bank improve its overall ranking in the latest BT-KPMG survey to seven from 20 last year. "Fund costs have come down," says Kaul. "Our operating profit has also improved to about Rs 5,000 crore."

Brijesh Mehra, country executive, Royal Bank of Scotland (Photo: Ashesh Shah)
Abank's health can be gauged by assessing the quality of its assets. Maintaining quality is not easy given the uncertain economic environment, but the Royal Bank of Scotland (RBS) has managed to do so and stay relatively safe. "A mixture of picking the right sectors, the right clients, working with clients in stress situations to help them navigate difficult economic situations has helped," says Brijesh Mehra, Country Executive for RBS' India operations.

Mehra says the bank looks for two primary things while lending: the borrowers' intent and ability to repay the loans. Intent can be judged from clients' market reputation, along with other factors such as how much equity clients put, their past track record, information about borrowed amount from other sources, etc. As for determining ability, Mehra says it is important to have good judgement. "We do not believe there are good sectors and bad sectors necessarily. In each sector there are winners and people who will be consolidating or growing and there will be others," he says. This approach has helped the bank keep its NPA coverage ratio high at 105.06 and its net NPAs at just -0.05 per cent of total advances.

The bank has been sticking to its strategy of focusing on crossborder wholesale banking serving international clients since 2009, though it has been refining its portfolio. "We expect that this trade and investment flow agenda will bring incremental investment not only from the UK but also the rest of the world," says Mehta.

Mushtaq Ahmad, chairman & CEO, J&K Bank
Last year, when the economy was growing at a sluggish pace, Jammu & Kashmir was one of the few states that performed well. As a result, J&K Bank, which derives a significant part of its business from the state, too benefitted. Not only did the bank register growth in deposits, advances and operating profits, but it also became more productive and efficient in 2013/14.

However, some of these parameters might see deterioration in the current year because of the devastating floods that hit J&K in September. But despite the hiccups, the bank continues to expand, and recently opened its 800th branch.

Jaideep Khanna, CEO & country head, Barclays Bank
In 2011, Barclays Bank withdrew from retail banking in India and started focusing more on corporate and investment banking. Jaideep Khanna, CEO and Country Head of the UK bank's India operations, says retail banking was acting as a drag on its bottom line. The strategic shift has paid rich dividends. "Any change in strategy takes time to reflect and that change has reflected in 2013/14," says Khanna.

In the BT-KPMG study, Barclays recorded growth in many key parameters including operating profit, deposits and fee income. Its operating profit rose at a compound annual rate of 15.41 per cent over the past three years but surged 141.41 per cent in 2013/14. Khanna says this is a result of a sharp focus on clients.

Barclays' efforts to utilise its global network has also helped. "For any corporation that has international aspirations in the markets where we are present, we are a natural partner for them. Similarly, there is a natural connect for US and UK clients who have an interest in India," says Ram Gopal, Chief Operating Officer of corporate and investment banking at Barclays in India.

Khanna says that as the current strategy is working, the bank would continue to focus in areas where it is already present - corporate and investment banking, equities and wealth management. "These will remain our focus and we hope to see significant growth in these areas," says Khanna.

Jacques Michel, chairman & CEO, BNP Paribas (Photo: Rachit Goswami)
When Jacques Michel shifted from Hong Kong to India as BNP Paribas' Country Manager five years ago, he said that the bank aimed "to grow both organically and through partnerships" in India.

Today, what differentiates BNP from other foreign banks is its local partnerships. The bank runs a home finance business with the Sundaram Group, a life insurance unit with State Bank of India, and an equipment finance venture with SREI Infrastructure.

The bank has also consolidated its position in key areas like corporate banking, investment banking and wealth management. It has delivered on many performance parameters. Its asset quality, for instance, is excellent as it has no NPAs. "Globally, our group appears among the most robust financial institutions," says Michel. "At times, we are considered as a conservative bank in terms of risk tolerance, but we are happy to be like that."

THE CLIENT IS KING

Kaku Nakhate, country head, Bank of America (Photo: Nishikant Gamre)
Five years into her job at Bank of America, Country Head Kaku Nakhate is focused on building strong ties with corporate clients. "We place a lot more emphasis on treating the client as the prime point of doing business with," she says.

Nakhate says the bank has a robust mechanism to choose clients. "It starts with choosing the right client set, then our idea is to grow with the client and do more and more with the same client," she says.

With a balance sheet size of Rs 26,929 crore and an operating profit of Rs 1,213 crore in 2013/14, the bank is using its global network to bring more clients to the country, particularly in the light of the government's 'Make in India' initiative. "India is one of the better manufacturing zones which people can think of as an alternative," says Nakhate.

The bank is focusing on increasing its advisory fee business, and is already strong in investment banking as well as equities. Its biggest deal in the past year was the merger of ING Vysya Bank and Kotak Mahindra Bank, where it represented the former. "If you look at the league tables, in fee size we are right up there because we pick deals that we want to do and we play such an important role in those deals that we get a proportionally higher fee compared to other investment banks," says Nakhate. "We have moved away from the strategy of doing business for league tables alone."

How we ranked India's best banks for 2014