On January 19, Japan's Nippon Life Insurance Company agreed to acquire a 26 per cent stake in Anil Ambani's Reliance Capital Asset Management (RCAM), which runs Reliance Mutual Fund, for Rs 1,450 crore. It was a big deal. As of December 2011, Reliance MF had average assets under management (AUM) of Rs 82,306 crore, and an investor count exceeding 6.6 million.

The company called for proposals from prospective bidders for its India operations. Fidelity India, which commenced operations in March 2005, managed over Rs 8,278 crore in assets at end of December 2011, and had over 190,000 customer accounts.

These two contrasting developments, taking place within days of each other, highlight the state of the Indian asset management industry today. While RCAM is a serial profitmaking fund house, Fidelity is the polar opposite. In 2010/11, RCAM posted a profit after tax of Rs 261 crore, growing 34 per cent over the previous fiscal.

During the same period, Fidelity posted a net loss of Rs 62.39 crore, more than double its loss in the previous fiscal. In 2010/11, RCAM carried forward Rs 574 crore in profits on its balance sheet, while Fidelity carried forward losses in excess of Rs 306 crore.

Fidelity is not alone. Twenty-three of the 44 fund houses for which data is available have been carrying forward losses. And among the profitable AMCs, 12 saw their profits decline in the latest fiscal. 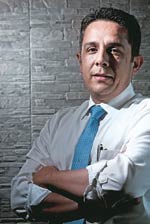 Many global AMCs do not have a presence in India, but all of them, for strategic reasons, will want to look at India at some stage.

Industry veterans believe that a fund house needs AUM of at least Rs 10,000 crore to break even. However, seven of the profitable AMCs had less than Rs 10,000 crore in average AUM as of December 2011.

Many have blamed big-shift regulations, including the ban on entry loads since August 2009, for the industry's woes. Harshendu Bindal, President, Franklin Templeton Investments (India), says that while the changes were meant to enhance investor focus, they ended up creating uncertainty over business models, especially among smaller financial advisors.

Navin Suri, MD & CEO, ING Investment Managers (India), which operates ING Mutual Fund, says the fund management industry has been hoping for a regulatory roadmap with a clear timeframe. This, he feels, will enable the industry to redefine and adapt business models. ING Mutual Fund carried forward a loss of Rs 249 crore in 2010/11.

However, Reliance Capital CEO Sundeep Sikka believes that low profitability should not be attributed to regulatory changes. "Asset management is a volume game, where every player has to pursue a business model that suits it the best," he says.

As for the business models, there are some structural flaws that the industry has built over the years. First, there is sharp variance in the investor mix. Corporate investors account for less than one per cent of the mutual fund investor population. But their share of AUM stood at 46.7 per cent in September 2011.

In a recent speech, SEBI Chairman U.K. Sinha noted that a "substantial amount of AUM of mutual funds is short-term debt, where substantial investments are from corporates". It was a broad hint, telling AMCs to rope in smaller but serious long-term investors. This will lower the churn in investments sharply, and help fund houses achieve financial goals. 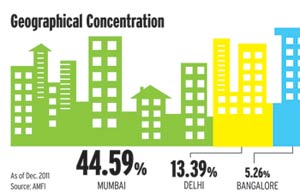 Click here to Enlarge
Investor profiles have also not changed over the years because of geographic reasons.

The top five cities still account for a whopping 73 per cent of the industry AUM, with Mumbai alone accounting for 44.59 per cent, according to data from Association of Mutual Funds of India.

"The key to expanding reach beyond established markets and top cities is the distribution network," says Bindal of Franklin Templeton. "Unfortunately, in the new business environment, smaller distributors are finding it difficult to get viable revenues."

Sikka believes it is important to penetrate deeper. "Smaller branches bring in new investors," says the Reliance Capital CEO. The AMC has opened branches in smaller towns, some of which are loss-making. Defending the concentration of investments in large cities, Sikka points at the banking sector, where around 43 per cent of the deposits are from the top five cities.

But the mutual fund industry's fortunes are also tied to investors' financial awareness. In a July 2011 report, New Delhi-based National Council of Applied Economic Research noted that the estimated number of investor households was 24.5 million, or about 11 per cent of all Indian households. 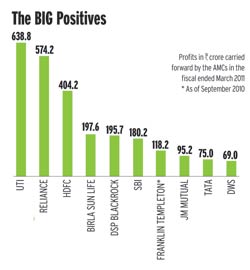 In rural markets, 46 per cent chose mutual funds while 22 per cent went with secondary markets. While these numbers are heartening, the fact remains that India has a tiny investing population.

The industry also needs to sharpen distribution and adopt new models. Before the ban on entry loads, an average distributor was rewarded handsomely. Today, he will have to go the extra mile to cater to an investor's needs.

AMCs also need to go beyond traditional channels such as independent financial advisors and large bank branches, and tap into intermediaries with low-cost access to remote locations.

Tying up with India Post, public sector and regional rural banks, self-help groups, microfinance institutions and the like will also help expand the investor base, says Bindal.

Broadening the market will also encourage the launch of more innovative products. Currently, the industry suffers from the copycat syndrome. Within days of an AMC launching a fund, the others follow suit and try to lure the same investor. Click here to Enlarge
Sikka feels the industry has many innovative products, such as the popular systematic investment plan (SIP). He also cites the example of the Reliance ATM card. This card, issued by a partner bank, is linked to mutual fund schemes and allows investors to withdraw cash at ATMs or make payments at merchant establishments. "The investor has the opportunity to earn market-linked returns every day and he also gets liquidity through the ATM card," says Sikka.

ING'S Suri is also quick to note that his AMC has some unique products. In the past 15 months, it has garnered Rs 500 crore in its multi-manager fund of funds. This is a master fund that invests across a set of sub-funds, depending on the investor's risk appetite and financial goals. In calendar year 2011, the industry's fund of funds category grew from Rs 4,500 crore to Rs 8,500 crore.

Given these limited measures and the slew of challenges, will the industry see some consolidation? "We have already witnessed some mergers and acquisitions and this could continue as new business dynamics are likely to put pressure on profitability over the short to medium term," says Bindal.

"This phase of consolidation is in line with the market cycle," says Ved Prakash Chaturvedi, CEO of the Capital Markets and Investment Management Group at L&T Finance Holdings. He believes that 10 years from now, the industry would have just 20 sizeable players. The financial service company's AMC arm has carried forward over Rs 124 crore in losses in fiscal 2010/11.

But how does one arrive at fair valuation in an industry where more than half the players have losses carried forward year after year? Perhaps, for the loss-making AMCs, a percentage of the AUM they manage can be a way to arrive at a price tag. But Sikka differs. "Valuation based on AUM is a misnomer." 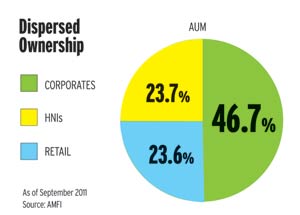 Click here to Enlarge
For Nippon Life, the 26 per cent stake in RCAM holds much more than the AUM. It also comes with 200 branches, over 6.6 million investors and two million SIPs that will bring in Rs 5,000 crore over the next 10 years.

"The valuation Nippon has given Reliance is based on its quality of franchise and asset," says an investment banker. "An incumbent flush with money cannot replicate a Reliance Mutual Fund in the next 10 years."

In December 2011, Bank of India picked up a 51 per cent stake in the AMC, buying Bharti's 26 per cent and another 25 per cent from AXA. This brought the latter's stake in the AMC down to 49 per cent.

Bank of India may prove the biggest winner, getting a full-fledged AMC in the deal, which is awaiting regulatory clearance. "A greenfield AMC would take between 24 to 30 months to reach the level we are at," says CEO Sandeep Dasgupta. Bharti AXA had average AUM of Rs 161 crore at the end of December 2011.

ING'S Suri says the best is yet to come. Many global AMCs do not have a presence in India, and will want to enter at some stage, he says. "Costs are not prohibitive here. And where else would you find growth from a 10-year perspective, with pension reforms ahead?"

Be that as it may, the fact remains that fund houses need to stop obsessing over AUM and the performance of their funds. They need to start taking a hard look at their balance sheets if they are to survive, let alone thrive. Shareholders will not be willing to live with accumulated losses for long.

Why HDFC is the best mutual fund house