The year 2012 did not begin on an optimistic note for Indian business. For the private equity (PE) and venture capital (VC) industry too, it started on a sober note with some reminders about its overall performance. Some funds that were planning to raise fresh money have either scrapped their plans or postponed them.

It is not smooth sailing for the PE and VC fraternity. But it is still a good time to take a close look at those doing well in the business. Perfect timing, in other words, for Business Today's maiden listing of India's best PE and VC funds. One that was finalised with help from the best minds in the business.

The Best PE and VC Funds listing also coincides with fund managers being forced to return to the basics of sound investing, without being swayed by what the larger herd thinks. The focus is now on low-entry valuations, significant and tangible value additions to portfolio companies, and most importantly, exits. Anubha Shrivastava, MD for Asia, CDC Group, one of the larger investors in India, is concerned over the "limited exits from our Indian portfolio over the last five years". She says: "There is a great deal of unrealised value and investors need to see this being addressed."

Arpan Sheth, the partner leading the private equity practice at consultancy firm Bain & Co., estimates that of the $68 billion invested in India in the last 10 years - much of it in the last four - just $22 billion has been returned so far.

Much of the PE and VC industry in India is funded by overseas endowment funds, sovereign funds and other such investors. For an industry whose unique selling proposition is high returns to compensate for the relative low liquidity of its investments over long periods, it has not been able to deliver on this crucial promise. Research by audit and consultancy firm KPMG highlights that PE returns for India lag those of China both on an overall and realised basis. 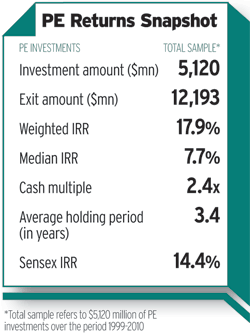 Low returns typically stem from high entry valuations and unrealised exits. Many funds invested rashly in the go-go year of 2007 when valuations were near all-time highs. Add to this, competitive bidding - two-thirds of deals are intermediated and therefore intensely shopped around - and pressure ratchets up, often taking PE deals at a premium to public markets. "We lost six deals in 2010 and three in 2011 to competitive bidding," says Sudheer Kuppam, MD, Asia Pacific at Intel Capital.

There is a surge of exits likely in the next few years as funds raised after 2005, typically with seven or 10 year horizons, wind down. KPMG estimates nearly $85 billion of exits will need to be realised by 2014. "This creates enormous pressure in the next 12 to 36 months for some sort of exits for this invested capital, if investors are to maintain or increase their allocations to India," says Sheth of Bain. The volatile capital markets - they lost nearly a quarter of their value in 2011 - offer no visibility on exits.

Given the track record of the industry at an aggregate level, it is no surprise that raising fresh funds is a tough ask. Several funds are finding it tough to raise follow-on funds, while some others are folding up, says Rishi Sahai of Delhi-based boutique advisory firm, Cogence Advisors. "Where is the performance," he asks. "Almost all the funds follow the usual pattern of investing in intermediated deals. Most do not even go beyond the metros looking for deals."

All of it calls for serious introspection by fund managers. There needs to be a change in the business model of the funds if they are to survive for the long term. Brian Lim, Partner, Pantheon, which has $24 billion of assets under management in private equity across the world, says: "For us India is a promising market. As it stands today, however, it will take more than just the India story."

Rajesh Srivastava of Rabo Equity Advisors - who is keen to raise a second fund in 2012 focused on the relatively resilient food and agri-sector - is nevertheless waiting for sentiment to improve. "The India story is certainly more difficult to sell, but it is not completely unsaleable." Most observers agree it will be an excellent vintage year for funds raised, not just because of a weaker rupee but also given the low valuations here.

For India as a destination to regain its sheen, however, fund managers need to take a hard look at the way they do business. For one, the cost structures of some of the larger funds have been under the lens. They will also need to refocus on the way they do business. The Indian PE and VC industry is at the crossroads. It is still far from becoming a mature industry. A change in direction is badly needed. Perfect timing for a listing by India's mostread business magazine.