The rapid income expansion in small towns and villages is pushing retailers to tap opportunities away from the big cities.

The Big Bazaar outlet in Sangli, a town of about 400,000 people in Maharashtra known as the "turmeric city", had an unusual set of shoppers in November. A family came from neighbouring Miraj and ran up a bill of Rs 1.25 lakh, splurging on clothes, utensils, provisions and sundry purchases. It was the largest transaction ever at any small-town retail outlet run by Future Group, the owner of the Big Bazaar chain.

Damodar Mall, Director for Food Strategy at the group, calls it a validation of its plan "to keep pushing our footprint deeper into the hinterland". Of the 1,000 outlets that Future Group counts across all its retail formats, around 95 today are in Tier-III towns - agglomerations with a population of about a lakh. 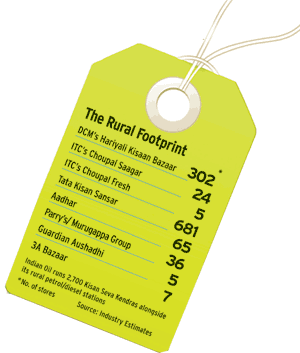 Rural consumption and expenditure is exploding, a fact that is not being missed out by either the researchers or those who have plans for organised retail. At the very basic level, all-India sales of fast moving consumer goods, or FMCG, are tipped to touch $100 billion by 2025. That, as Prashant Singh, Vice President at consumer research firm The Nielsen Co., points out, is the size of Ukraine's economy. "And, in the next five years," he adds, "FMCG sales in rural markets alone will be as big as Tanzania's GDP."

Numbers - see Rural Roar - tell only part of the tale. The real story lies in social and consumption changes rolling over the hinterland. "Today, many consumers in rural India act and behave like their urban counterparts; in fact, their attitudes and aspirations break the mould of a stereotypical 'rural' consumer," observes Singh. They are turning out to be voracious consumers of packaged food, hair dyes and fairness creams, among other products.

In fact, the good news gets even better as these markets show a higher propensity to spend. According to data from the Mumbai-based Centre for Monitoring Indian Economy, or CMIE, while urban India spends half its income, the spending in the rural economy is 54 per cent.

To be sure, there is the effect of a smaller base at work here but consumption in the hinterland has been expanding at 12 per cent for the last six quarters; urban demand trails at seven per cent. The reasons are not hard to fathom - record government spending, infrastructure investments, and a never-before reach of telecom and media services.

Under the Pradhan Mantri Gram Sadak Yojana, a road-building project, about 32,000 habitations have been connected by constructing 85,405 km of roads, taking the road network into new areas. Along with better product recognition thanks to the wider reach of marketing that increases consumer-pull, better roads mean easier distribution for manufacturers.