Numbers never lie, and they always tell a story. If anything, the recent numbers released by the Central Statistics Office (CSO) tell a very dismal tale. The investment rate, the growth driver of the economy, is expected to drop to 29.3 per cent of gross domestic product (GDP) in fiscal 2011/12 from 30.4 per cent a year earlier, according to CSO's advance estimates. That decline may not seem severe. But compared with four years ago, when the investment rate accounted for 32.9 per cent of GDP, it certainly is a sharp fall. Ideally, the rate should be rising steadily each year.

Investment and growth reinforce each other - if one is in decline, the other follows suit. The dismal investment numbers partly explain why the government has revised its GDP growth estimate for fiscal 2011/12 downwards to 6.9 per cent. That would make it the second slowest rate of growth in nine years. Other estimates suggest that the decline will be sharper, at 6.5 per cent. If the economy is to grow at eight to nine per cent, the investment rate should have gone up instead of coming down. Click here to Enlarge
The government is certainly aware of the investment imperative. The Prime Minister's Economic Advisory Council (PMEAC), chaired by C. Rangarajan, has said that the decline in investments is one of the most important issues that the government has to address.

But that's easier said than done. The CSO's advance estimates say that total investments (public and private) in fiscal 2011/12 will likely grow 5.6 per cent to Rs 17.95 lakh crore as against 7.5 per cent (Rs 17 lakh crore) earlier.

The declines will be weighing heavily on Finance Minister Pranab Mukherjee's mind as he finalises his Budget for the next financial year. Mukherjee is aware that there will be no real infrastructure and capacity addition in the economy unless there is growth in investments. No major government projects have been announced in recent years and the private sector has been forced on to the backfoot. The CSO numbers suggest that growth in private sector investments will moderate to 3.8 per cent this financial year from 4.7 per cent last year. Clearly, the high interest-rate environment, policy flip-flops and power/gas shortages have taken a toll. It is encouraging that the prime minister has committed to address issues like the power shortage. We might not jump to nine per cent growth but we will stop the decline: Dr Prathap Reddy
Expectations are therefore high that the Budget, which will be presented on March 16, after the assembly election results, will push through long-pending reforms. "There has not been too much allocation towards investment (supply). There has been too much focus on consumption (demand). By that, I mean subsidies and waivers (in previous budgets)," says D.K. Joshi, Principal Economist at ratings agency CRISIL.

On its part, the Reserve Bank of India (RBI) has been moving in the opposite direction, at least for the last two years - it has increased interest rates 13 times since March, 2010. "The whole logic of raising interest rates is you want to slow down aggregate demand, especially investment demand. You make the cost of borrowing higher by raising interest rates - investment will obviously get postponed," says Sudipto Mundle, economist and emeritus professor at the National Institute of Public Finance and Policy.

Mithun Chittilappilli, Executive Director at V-Guard Industries, India's biggest voltage stabiliser maker, is doing just that. "We have done some of our capex and will postpone some new investments."

Easing interest rates could boost investment in rate-sensitive sectors, but it will not have much of an impact on investment in other sectors, such as power. "A lot will also depend on the dynamics of the global economy," says Samiran Chakraborty, Regional Head of Research, Standard Chartered Bank. 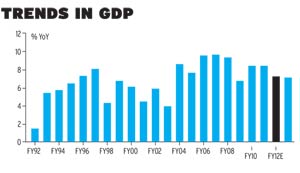 Click here to Enlarge
Investment growth was in double digits in the five years before the 2008 crisis, when GDP growth was over nine per cent for three consecutive years. But since 2010, investments have been adversely affected by a combination of rising interest rates and policy problems. During the Tenth Plan, total investment in the power sector was $60 billion. In the Eleventh Plan, it is expected to be around $133 billion, most of it from the first three years.

Pulok Chatterji, Principal Secretary in the Prime Minister's office, has now been tasked with finding ways to get things moving again. "Interest rates coming down will not help much unless the fuel supply situation improves," says Subba Rao Amarthaluru, Chief Financial Officer of GMR, one of the largest infrastructure groups in the country. In the short term, that is unlikely to happen.

India's oil supplies may be disrupted in the wake of the Iran crisis and prices have already started rising. Currently, India spends $106 billion on oil imports. Any increase in that bill will mean Mukherjee has less to spend elsewhere. Declines in coal and gas supply are not helping.

"Importing gas and coal is not a solution because we will not be able to sell that kind of (expensive) power in India," says Amarthaluru. And imports will also widen the fiscal deficit.

How the government manages that deficit is something investors will be looking at closely. In all likelihood it will miss its ambitious fiscal deficit target of 4.6 per cent for 2011/12 and end the year with a deficit of 5.6 per cent.

Fiscal consolidation in 2012/13 is one of the more challenging tasks facing the government, say economists. The fiscal deficit target for the year is 4.1 per cent. According to Rohini Malkani, economist with Citi, pressure points for fiscal 2012/13 include: Right to Food and the losses incurred by state electricity boards. This is likely to result in a deficit in the 5.5 to 5.8 per cent range," says Malkani.

"If there are signals that the government is not tough on fiscal consolidation, there will be adverse effects on financial markets, and therefore, on investments," says Mundle. On the revenue front, the government could look at reviving its disinvestment agenda. The 2G spectrum auction could be another bonanza. But with the current policy uncertainty, nobody is willing to hazard a guess on how that will go.

Also, a lot of potential revenue is lost through tax exemptions. A rough estimate puts this at six per cent of GDP, nearly double of India's subsidy bill. Capping tax exemptions could shave about half a percentage point from the ballooning fiscal deficit.

Expanding the service tax net by taxing all services except a few in a negative list could raise revenues and bring the deficit down by another half percentage point.

The outlook appears gloomy, but there is some positive talk. "I continue to be very optimistic about the future, because domestic demand will continue to rise," says Yashwant Sinha, a Bharatiya Janata Party leader and former finance minister.

Prathap Reddy, who runs the Apollo Group, a large hospital chain, is also hopeful. "It is encouraging that the prime minister has committed to address issues like power shortage. We might not jump to nine per cent growth but we will stop the decline." The Budget will go a long way in determining if the decline is actually arrested or not.

Budget 2012 last chance for Pranab to get it right