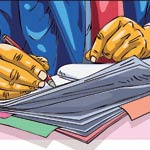 End September Preparations for a detailed estimate of the government’s expenses for the forthcoming fi nancial year begin. Currently, the government spends almost as much in a year as India’s entire population does on food December The first cut of the Budget is presented to the Finance Minister. The sheets on which the fi rst cut is presented are always blue. It is claimed that black print shows up better on light blue paper than on white paper 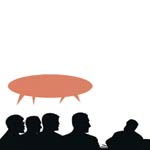 January Representatives of industry and bank associations, as well as select economists, meet the Finance Minister to voice their concerns and suggest measures to address them that could be included in the Budget. The minister listens to all, but makes no commitment 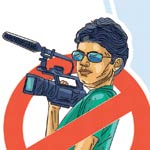 The Press From early January, journalists are barred from fi nance ministry, once again to ensure Budget proposals remain secret 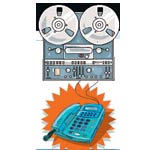 Visitors Visitors to the finance ministry are constantly monitored through CCTVs during this period. They are not allowed to use chairs outside the range of the CCTVs 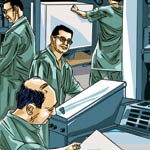 Last Week of February Budget documents are printed at a press in the basement of the finance ministry. Around 100 people working there are quarantined inside for a week before Budget Day, to prevent any details being leaked. This year, with the Budget postponed by two weeks, the quarantine will be in March 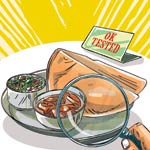 The Canteen: The watch kept over the quarantined press workers goes to extreme lengths. Food tasters sample all the food served to them to ensure they are not poisoned 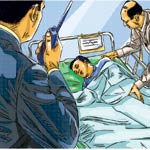 Emergency If one of the quarantined workers in the printing press must step out following an emergency, he is always accompanied by an offi cial of the Intelligence Bureau and another from the Delhi police. They do not let him out of their sight
Click here to Enlarge Finally The Finance Minister reads out the Budget in Parliament, starting usually at 11 a.m. The only difference this year is the date: the Budget will be presented on March 16