He is the flagbearer of the Birla name, and also a commodities czar on the rise. 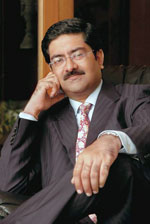 Kumar Mangalam Birla
Kumar Mangalam Birla has a new hobby—shooting. On weekends, you’re likely to see the 40-year-old Chairman of the $24 billion (Rs 96,000 crore) Aditya Birla Group at the shooting range, indulging in some target practice. “I keep my gun ready in office also,” he says in a lighter vein. When he isn’t being trigger-happy, this movie buff (the last movie he’d seen at the time of writing was Aamir Khan’s directorial debut Taare Zameen Par), spends time with his three kids Aryaman Vikram, Advaitesha and Ananyashree.

“I play chess a little bit nowadays,” says Birla, quickly adding: “That’s not because I understand chess too much but for my daughters who are chess players.” The gun-toting and pawn-pushing image may be reserved for the time spent away from the office, but Birla has been hitting the right targets and making the right moves when he’s back in his corner room for some time now. He’s been doing that for most of the 12 years since he took over at the helm of the empire in tragic circumstances (his father Aditya Vikram Birla died at the age of 52 in October 1995).

Whether he’s acquiring companies, or planning new ventures, or even exiting businesses that don’t quite fit in, Birla has been pretty much spot on with his decision-making over the years. A few calls might have gone awry, but those who’ve worked with him agree that he’s been consistent—be it in implementing strategy or simply as a person.

As Amit Chandra, a former head honcho at investment bank DSP Merrill Lynch and now at New Silk Route Advisors, points out: “For all his numerous positive attributes as well as his few personal quirks, which he is well entitled to, he is pretty much the same person that I first met 12 years ago.”

Chandra has worked with Birla virtually from the day he took over, doing his bit to help him restructure the varied businesses of this diversified conglomerate.

Twenty-eight isn’t the age for anybody to slip into the hot seat—certainly not at a group with such a wide range of business interests, not just in India but overseas; a group that at that time boasted a sales turnover of $1.7 billion (roughly Rs 8,000 crore). Indeed, it was a baptism of fire for the young Birla, fresh out of the London Business School. The task at hand was unenviable: To pick up the baton passed on from three generations of Birlas (Ghanshyam Das, Basant Kumar and Aditya Vikram).

“Those were challenging days for him since people within the group, within industry at large, and in the media were deeply and often openly and harshly sceptical of his capability to handle his father’s legacy,” recalls Chandra.

“The success and wealth haven’t changed the man. He has imbibed all the good things from his father and forefathers,” says Mukul Kasliwal, his brother-in-law, who is the Managing Director of S. Kumars Group, a textiles company.

Adds grandfather B.K. Birla, Chairman of the B.K. Birla group of companies: “Kumar is a people’s man. That’s one quality that differentiates him from Aditya Birla.”

Then, there are the global entities like the Canada-headquartered aluminium giant Novelis that Birla bought for $6 billion (Rs 24,000 crore) earlier this year, business process outsourcing firm Minacs (another acquisition in Canada), Aditya Birla Minerals in Australia, and Aditya Birla Chemicals in Thailand.

The international empire spans Thailand, Indonesia, the Philippines, Egypt, Canada and the US.

“The journey has been very satisfying so far,” avers Birla, sitting at his boardroom on the sixth floor of the Hafeez Contractor-designed Aditya Birla House in Central Mumbai.

For good measure, Birla is also India’s premier branded garments player with such brands as Van Heusen, Peter England, Louis Philippe and Allen Solly under his belt, and can also take pride in being at the helm of the fastgrowing private sector insurance company and the fourth-largest asset management company in India.

“We have contemporised the companies to a large extent. They are now so much more aggressive and dynamic in their approach,” says Birla, adding, “Our aim is to have a mix of asset-light and asset-heavy businesses.” Besides reducing uncertainty by diversifying into higher-growth sunrise industries, Birla has resorted to geographical de-risking.

Revenues from international operations account for almost half of total turnover. “Kumar has adapted to the new business environment quite well,” says B.K. Birla, adding, “He has consolidated the existing commodity manufacturing businesses and also successfully explored the new ones in the new economy.”

A global focus, to be sure, isn’t a new phenomenon at the Aditya Birla Group. Kumar’s father was spreading wings internationally right from the late ’60s. However, the current Chairman is going about it in a slightly different way, and in very different environs. Explains Anand Rathi, Chairman, Anand Rathi Securities, a Senior President at one of the group companies when Aditya Birla was in charge: “Aditya set up many greenfield ventures both in India and overseas, whilst Kumar has an aggressive acquisitionled strategy.

One reason for this could be because Aditya operated in a licence raj regime and Kumar is operating in a post-liberalisation environment.” (Rathi had left the group before Aditya Birla died.)

One of the first things young Birla did after taking over was to give the group a corporate identity, which would manifest itself as a corporate logo.

Birla chose the rising sun—to herald the dawn of a new day, and the beginning of a process of change.

“He was very clear what he wanted from us,” recollects Preeti Vyas Giannetti, CEO, VCG Communications, which was responsible for creating the logo.

The next task was to rope in managers and leaders to drive the change in the process.

One of the first to come on board was human resources Director Santrupt Misra, who came from Hindustan Lever Ltd (HLL), way back in 1996.

Another hand from HLL—at that time perceived to be a hot-bed for talent—is Debu Bhattacharya, who joined in 1998.

Another high-profile catch was Sumant Sinha (son of former Finance Minister Yashwant Sinha), who joined the group as Corporate Finance Head after a stint at a global investment bank. Sinha is currently spearheading the retail project.

He is nowadays scouting for talent in the fast-growing (and highattrition) services sector, for his telecom, retail and financial services ventures.

“Kumar Birla relies on a mix of both in-house and outside professionals to guide him in the business. That’s a good approach since he inherited an established big business empire,” says Rathi. Indeed, along with the fresh blood that he keeps inducting periodically, Birla also relies on some of his trusted lieutenants who’ve been with him virtually right from the time he took over. These veterans include people like D.D. Rathi, CFO, Grasim, and K.K. Maheswari, who is the Business Head of Chemicals Division. Analysts say Kumar’s next big challenge would be to groom a second line of leadership as the key top management team is pushing 60.

These include Bhattacharya, who looks after the copper business and aluminium major Hindalco, Shailendra Jain, who heads the group’s pulp and staple fibre business, and Aga. Birla, for his part, has been busy building that second line. “We have a strong line-up. Today, there would be at least two or three contenders for the top job (at various businesses), unlike in earlier years,” hints Birla. In fact, he says, he is looking at creating international managers.

“Ours is completely an entrepreneurial-driven company,” he adds. Insiders reveal that once he discusses (and agrees) on targets and the broad contours of a business, he completely leaves it to the business head to perform. These leaders have done well for themselves so far—as has Birla in choosing these few good men.