Triumph of a dairyman

Dodla Dairy has emerged as an efficient player with a tight control on operations and quality. 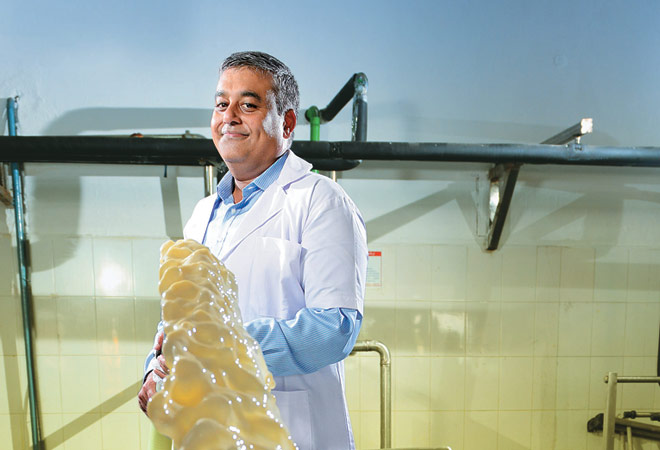 Even as a young man Dodla Sunil Reddy was not riskaverse. As a 23-year-old industrial engineer, he first hit upon an idea to export Indian mangoes to Singapore. But his consignment was rejected when it did not meet the stringent standards. Undeterred, the native of Nellore district in Andhra Pradesh reached out to his friends in Singapore. In one of their apartments, they all got down to sorting and grading the mangoes, after which Reddy managed to sell most of what he had in the local market. The minor setback, however, did not shake his faith in doing business in the farm sector.

In 1996, Reddy decided to get into the dairy business. By April 1998, he had started Dodla Dairy in Hyderabad and began processing 75,000 litres of milk a day. He raised Rs 9 crore for this purpose - Rs 5 crore as loan from IDBI Bank, Rs 2 crore from venture capital firm Ventureast and the remaining from his father Dodla Sesha Reddy.

According to Sarath Naru, Managing Partner of Ventureast, what set Reddy's dairy business apart from others was his effort to excel in everything he did. Naru's fund exited the business in 2006 with 14-fold returns. Dodla Dairy focused on building a consistent supply of milk by procuring it directly from farmers and maintaining its quality. "It was one of the first dairies to use a customised Enterprise Resource Planning (ERP) package to track at every stage the quantity of milk and percentage of fat," says Naru. This is one major reason why Dodla Dairy has bagged the award for operational excellence among the best emerging companies in the BT-YES Bank survey.

VIDEO:Know more about Dodla Dairy and its future plans

Reddy, who invests more than Rs 1 crore every year on IT solutions, says ERP is a tool that helps in product costing for the diary. "I can give you any time my profitability on the product and take a call on discounts and offers that we can make. It is all based on sales volume, purchase cost and average realisation figures," he says. As a result, in a low-margin industry, Dodla Dairy has been able to achieve high level of operational efficiency, leading to better return on investment. "It is generally around 10-12 times for us," he says.

The dairy's revenue in the first year of its operation was Rs 23.47 crore. In 2014/15, Reddy says revenue will touch Rs 1,040 crore. Today, the company with its nine processing plants connects with dairy farmers across 8,000 villages. The dairy also has 62 chilling centres across Andhra Pradesh, Karnataka and Tamil Nadu. In August, the company set up a unit in Uganda to target the East African region. "The EBITDA margin in Africa could be 10-15 per cent. In India, the average is around six per cent. The blend of the two different geographies could push up the overall margin to between eight and nine per cent," says Reddy.

The company today handles 7.5 lakh litres of milk every day. With 1,400 employees, Dodla Dairy is the third-largest private player in South India. In the next five years, it aims to boost sales to Rs 2,500 crore and list on the stock markets. By then, Reddy says, 10 to 20 per cent of the total milk processed would come from their own farms. The company also has plans to produce health drinks. It is also planning to enter Sri Lanka, Malaysia and the US in next two-three years. "We will look at the US as a production base and South East Asia as consumption market," says Reddy.