In an interdependent world, all countries need to do well
RBI Print Edition: August 23, 2020 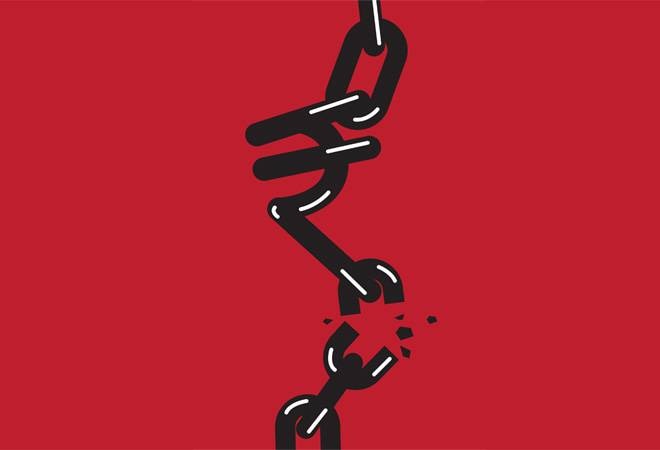 Healthcare is the most important macroeconomic indicator across the world right now. A large-scale global delivery of Covid vaccine seems a bit too optimistic over the next 12 months. It means that a very sharp, quick global economic rebound is unlikely. In the first quarter of the pandemic, the GDP of the United States contracted 9-10 per cent, or about 33 per cent on an annualised basis. This is true even in Germany, though it is likely to have a swifter rebound because its health curve is under control. China, another bellwether, is in a much better shape. In fact, its economic recovery sounds best because they were able to contain the virus.

Both globally as well as domestically for India, growth is highly interdependent across regions. You cant have a small pocket of the world or a small pocket of India fine on the health curve and expect a huge revival of the economy. You need different parts of the growth engine to be in sync with each other as growth in modern economy is so much dependent on growth based on trade and services. And trade and services can grow in a healthy manner only if different parts of the world are all doing well. 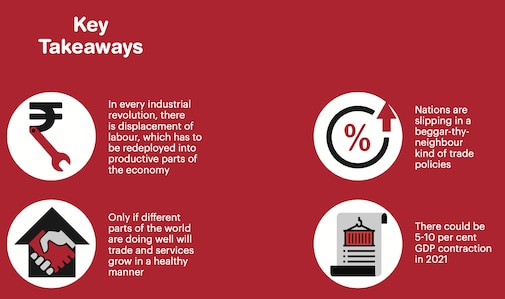 Its not just the emergence of the pandemic. The emergence of something close to what looks like a cold war with China is also on the horizon, potentially making it harder for the global economy to recover. China might be best positioned health curve wise, but the China-centric global supply chain can get disrupted by the cold war with huge implications for other countries. It can be damaging for the immediate to medium term prospects of countries that have the capacity to replace the supply chains, and the ones that do not have such abilities. The countries that do not have the capacity to replace the supply chains domestically will continue the imports irrespective of the rising costs. It will impact consumption due to the increase in the cost of imported goods, as well as inflation. For developed economies, the rising cost of goods that are replaced can add to debt problems since they have already embarked upon very heavy fiscal expansion programmes, like the Covid support, in the order of 10 to 20 per cent of their GDP.

The higher cost (due to supply chain disruptions) will lead to further debts and if their growth paths dont recover, some of them will start facing debt sustainability questions. Therefore, the growth headwinds coming from tariff wars are likely to make it difficult for these economies to deal with their fiscal excesses.

Two scenarios could emerge, both not so great. One, developed economies will take the route emerging markets often take and ask their financial sector - banks, insurance companies and others - to buy government debt. It will create difficulties for the private sector to grow, to get credit at low cost. It will result in financial depression and low growth and, thereby, lower productivity and deflationary pressure in the economy. The alternative, which cannot be ruled out, is that growth will rebound. Maybe, vaccines will be developed and delivered in 2021/22 and the private sector will want to grow fast. It will start competing with the government, which is trying to manage large quantities of debt. When it happens, there could actually be in some sense an overheating of the economy and central banks might be forced to get into what economists call fiscal dominance. Thus, as far as developed economies go, both deflationary and inflationary paths are associated with challenges. Deflation means more productivity, and in inflation, macroeconomic instability. The extreme outcomes, or stress outcomes have become more likely than before.

Nations are slipping in the direction of beggar-thy-neighbour kind of trade policies. It is usually a sign that underlying growth and undercurrents are weak in developed economies and the political economy is looking for quick fixes as well as mechanisms to blame someone else for the problems. These geo-political tensions can see significant shifts around election outcomes. One needs to watch out for how US elections play out in November. The results may not entirely reverse (the US approach towards trade partners, including China), but there can be ways to work together. Also, firms are questioning whether over-reliance on one supplier or one country as a supplier is a great strategy, given the kind of shocks the world is witnessing. So, some movement to diversify global supply chains, which is desirable for the global economy, may happen on its own. It will perhaps make it more robust and stable. The world needs the US, China, Germany and India. All these countries need to do well as our growth is now heavily interdependent.

Uncertainty and political issues were not that important earlier for economic outcomes in developed economies than they are today. Hence, countries need to become resilient and have buffers against uncertainty. They do need to think about medium-term fiscal consolidation paths. They need to have fairly robust financial systems - banks and shadow banks or non-bank financial companies - in place. The Covid shock has accelerated the decline of some sectors like retail, malls, etc., which were any way getting crowded out by ecommerce. Sectors such as travel and hospitality will remain heavily hit until economic activity comes to full rebound. Boeing, for example, has said air traffic may not revert back to pre-Covid levels until 2023. Its almost a mid-term horizon.

So, the financial sector needs to be in great shape because countries will have to find ways to allow corporates to restructure debts one way or the other. Its not just important to swing for growth every single time, we have to do it while also preparing for the outcomes.

In the last 25 years, the quality of US infrastructure -bridges, railway tracks, roads - has deteriorated. It is very clear that there is under investment in infrastructure facilities. Harvard Economist Larry Summers, who has been talking about secular stagnation, has been saying repeatedly that infrastructure investments are required to improve potential growth levels of developed economies. It needs to be considered seriously.

Compare the outcomes of Germany and South Korea vs the United States on the health front. Health services are delivered in an extremely decentralised manner in the US. There is virtually no national health service other than for the elderly and very poor. This means it isnt possible to deliver health solutions at a community level during a pandemic. Partly health services have been ignored. Partly pharmaceutical industries, health industries, insurance companies have started charging phenomenally high prices for providing services. The result is that the quality of health services at the lowest income level in the US is right now a serious question mark. It almost looks like an emerging market problem. Countries hence need to spend on health services and see how to democratise it.

On education, Covid has accelerated the use of technology. Automation has also been put on fast-track by many companies, given the difficulties in supply chains and pipelines during Covid. It is time to rethink education and skilling. One cannot have traditional education without vocational training for new technologies that are coming about and expect to create jobs. Brick and mortar industries are getting displaced and if they are making way for newer sectors because of the ICT revolution, the youth needs to be trained differently. The displaced labour will have to be trained. This has been a feature of every industrial revolution. There is a displacement of labour and we have to find ways of redeploying labour into most productive parts of the economy.

All these - having buffers to deal with growth slowdown, investing in infrastructure, health and education and ensuring high-quality jobs for displaced labour and youth by way of vocational training are essential for future economic growth in the developed world and emerging markets. Perhaps it is even more important for India.

Some analysts are looking at anything between 5-10 per cent GDP contraction for 2021. What lies beyond is also a crucial question. One should remember that globally, growth momentum has been slowing down even prior to the Covid outbreak.

World over, controlling the health curve, getting on to a robust economic path and ensuring the financial sector is in good shape to allow debt restructuring and healthy credit origination in the recovery phase are crucial components for the future.