Giants on the prowl

With the Indian IT market expected to grow at an estimated CAGR of 18 per cent over the next five years, foreign IT giants aren't just dominating the market, they're opening up new segments and setting the agenda for some categories. Rahul Sachitanand and Kushan Mitra tell you about the twists and turns.

Across India, companies will spend Rs 110,000 crore on their IT and BPO requirements in 2008, according to research agency IDC, and multinationals are looking to dominate their buying across software services and products. While IBM is the top player in the services market, with 10 per cent market share, according to industry analyst IDC, HP dominates the hardware market, even as Dell has ascended to the #1 position in the large enterprise market. What’s more, in the Internet gear market, Cisco is a dominant player across multiple segments and is aggressively growing its market share. With the Indian IT market expected to grow at an estimated CAGR of 18 per cent over the next five years, MNCs are getting prepared to dominate proceedings, with several companies already topping the $1-billion (Rs 4,800 crore) revenue mark for their India ops and laying down the gauntlet to their domestic rivals.

IBM, which first came to India in 1951 (before being shown the door in 1977 and returning 14 years later), is leading the way in the services market, with multiple big-ticket deals across the telecom, financial services and consumer goods sectors.

Click here to Enlarge
Company executives claim Big Blue’s $1.5 billion-plus (Rs 7,200 croreplus at current rates) deal with Bharti Airtel ignited growth in and attention paid to the domestic market. “The IBM-Bharti deal was a landmark because it was a risk-sharing deal,” says Som Mittal, President of NASSCOM. Nipun Mehrotra, General Manager, Global Technology Services, IBM, says that the company has taken its India-focussed approach even further. “The idea is to partner in innovation and business transformation; the idea is to give more than just IT,” he says.

As an example, he talks about an agreement the US company has signed with insurance company Max New York Life and collaborated on a new product called Max Vijay. “This will make it possible to have small value transactions in the life insurance space, which we both believe can radically transform this market just as small-ticket pre-paid cards did for the Indian mobile industry.” IBM’s India revenues (across hardware, software and services) topped the $1-billion mark in 2007. 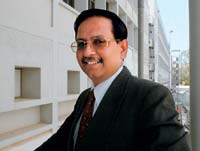 Shanker Annaswamy
Mehrotra’s team is also working with IBM’s research and software labs to devise new solutions for its customers. “One of the main concerns for telecom operators such as Bharti and Idea is to try and improve their average revenue per user and, consequently, the company’s profitability. We’ve devised multiple solutions around valueadded services to help them,” Shanker Annaswamy, Country General Manager, IBM India, said in Bangalore recently.

IBM is in the lead in financial services, but arch rival Hewlett-Packard India is in hot pursuit. Over the last couple of years, the company has notched up large deals, including the likes of Britannia Industries, Bank of India and Bank of Baroda. Says HP India Managing Director Neelam Dhawan: “Services is growing rapidly, and the reasons are simple: Indian companies need IT and they go to names they know of and trust.” Dhawan holds out particularly on the burgeoning retail space which will need significant investments. Besides having a growing services portfolio, the likes of IBM and HP are helped along by their strong presence in the hardware market. HP is the #1 player across multiple markets, including notebooks, desktops and servers. “We have the largest retail presence and channel strength in the market. We have two strong brands in the market and we’re launching new products almost every month,” boasts Rajiev Grover, Director, Consumer Products, HP India.

Analysts say multinationals have been quicker to spot changes (personalisation of computers, decline in PCs and emergence of notebooks) than their Indian counterparts and profit from them. “Multinational vendors now control 80 per cent of the market due to their broader product offerings,” says Diptarup Chakroborti, Principal Research Analyst at Gartner, a technology consultancy. Neelam Dhawan
It is the same broad offerings that IBM sees as its USP in the Indian market. Not only has it signed deals with both Vodafone and Idea Cellular, taking advantage of its telecom expertise, but also with real estate major DLF, Delhi International Airport, Hindustan Petroleum, Bharti Retail and others, many of them on a business-transformation basis with an element of revenue sharing. IBM executives point to a fundamental change in the nature of deals being signed out in India. “The Indian domestic IT market has witnessed huge transformational deals lately as opposed to stand-alone ones from multiple vendors. This trend is likely to grow as companies ride the growth wave to differentiate in the market and become players in the global economy,” says Sandip Patel, General Manager, Global Business Services, IBM India. “Clients prefer a partner like IBM to be able to leverage the length and breadth of our technological innovation, global industry skills, and financial strength.” Some analysts also argue that multinationals have also been lucky to hit the Indian market just as it peaked. Click here to Enlarge
Computer maker Dell, for example, has recently crossed the $1-billion sales mark in India, within three years of launching its products in the Indian market. “We have gone from zero to 10 per cent share in the government segment and we’re the largest player in the large enterprise space,” says Sameer Garde, India General Manager for Dell. Company executives also point out a trusim. Sales of expensive hardware have often been the main driver for lucrative services contracts. In markets such as servers, Dell, HP and IBM are a triumvirate, Indian vendors hardly figuring in the picture. “Indian companies are no longer interested in piecemeal contracts for just servers or PCs. They have now moved from viewing IT as a cost centre to it being a strategic tool,” says Pallab Talukdar, Enterprise Business Head for Dell India. The company leads in mass market servers and has bought several companies overseas to wrap services around its hardware offerings.

Besides dominating multiple markets, companies such as Internet gear vendor Cisco Systems are trying to set the agenda for nascent markets such as broadband. “We found broadband penetration was low in India, so we are working with the government to improve access,” says Naresh Wadhwa, Country Manager for Cisco India. Ten months ago, the company also started India Business Councils to provide a vertical-focussed strategy for its local business. Naresh Wadhwa
While Cisco has a dominant 80 per cent-plus share in its core markets such as routers and switches (equipment used to direct Internet traffic), the firm is also a major player in other markets, ranging from enterprise telephony to wireless local area networks, with market shares ranging from 22 per cent to 42 per cent. “There are just sixseven million broadband subscribers in India… this is just a small fraction of where we eventually see the market,” says Wadhwa. Incidentally, Wim Elfrink, Head of Cisco’s $6-billion (Rs 28,800 crore) services business, has relocated to India some months ago.

While MNCs have focussed on ITITES and large enterprise markets, they’re realising that there are opportunities beyond. “Companies big and small, and even government departments, will need to invest heavily in technology,” argues IBM’s Mehrotra. In fact, when Finance Minister P. Chidambaram thanked IT investments for unlocking tax incomes in the 2008 Budget, IBM was the company involved with the Central Board for Direct Taxation. “There is a huge amount of information locked up with the government and even different arms of the same department can’t access that information. Government spending on IT will grow dramatically, if only to improve governance. These are not ‘Business Transformation’ projects; rather, most of them are short-term projects, but we have to be stupid not to be in this space,” adds Mehrotra. Elsewhere, IBM and the multinational brigade are also re-working strategies to target the opportunity in the small and medium market. With a presence in India that goes back a decade, and an employee strength of over 70,000 employees, Mehrotra jokes that IBM India is pretty “Indian”. So much so that the company even takes small-ticket deals, of around $10,000 (Rs 4.8 lakh), from small and medium-sized companies.

Dell, meanwhile, has launched the Dell 500 targeted at small businesses and claims that several products are in the pipeline. According to a recent study by Zinnov, a Bangalore-based management consultancy, the Indian small and medium business (SMB) market is pegged at around 35 million units and IT spending by this category is about $6.5 billion (Rs 31,200 crore).

Sameer Garde
Despite the march of the MNCs, not all their domestic rivals are intimidated. Wipro, for example, gets a tenth of its revenue from its domestic and Asia Pacific business and is the second-largest vendor in the domestic IT services market. “We have a deep commitment to the Indian market,” says Anand Sankaran, Senior Vice President & Head, Wipro Infotech. “Beginning with the YES Bank deal in 2004, we’ve won perhaps the biggest outsourcing deal from Aircel and several other contracts from Future Group, Dena Bank and HDFC Bank.”

An HCL Infosystems executive points out that in the overall PC market, the company is snapping at the heels of HP and is well ahead of other MNCs like Dell, Acer and Lenovo. “It is not as if Indian companies have not looked at the domestic market. I think several Indian companies, particularly Wipro and TCS, have done great work domestically, but I believe as Indian companies grow and look to transform their businesses, they want a lot more than just systems integration and they want to concentrate on their core areas, and this is the space that companies like IBM and HP have exploited,” NASSCOM’s Som Mittal argues.

With the domestic market expected to grow at a CAGR of over 18 per cent over the next five years, there may be several more twists and turns in this story. Watch this space.
TweetYoutube

How the crisis came home