Her rise since then has been meteoric. She has worked on some of Tatas biggest global ventures. She was involved in big ticket deals such as the Tatas NourishCos deal with PepsiCo India in 2010, and of course, Tata-Starbucks, which she now heads.
Manisha Singhal | Print Edition: Mar 16, 2014 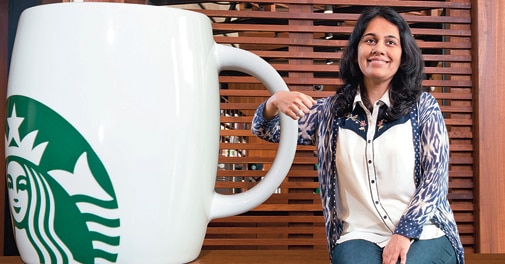 Avani Davda, 34 , head of one of the most talked about Tata ventures - the global tie up with coffee house chain Starbucks - has interacted with some of the sharpest business minds in the course of her career at the house of Tatas.

But her main mentor has been Tata loyalist R. K. Krishna Kumar who cherry picked her later to head the Starbucks joint venture.

Over the years, Davda has turned into a true blue Tata representative - focused, down to earth and unassuming, with a deep sense of social responsibility  - values she says she imbibed from watching Ratan Tata from close quarters.

Davda applied to the Tata Administrative Services in 2002, her first job. Earlier, she briefly interned at ad agency Lowe Lintas after doing her MBA from Mumbai's Narsee Monjee Institute.

"I did not comprehend the vastness of the Tata Group," she says. She maintains she had not done enough homework on the Tatas when she went for the interview. It was a grueling one - in three phases which also included a psychographic profiling.

She sought her mother's advice on whether she should join the company.  "Of course Tatas," her mother told her. "The Tatas are honest and you are a girl, you will be working with a safe company."

She began as a trainee. The next few years at the Tatas were  trials by fire as she started getting acquainted with the different companies of the Group through carefully designed assignments.

Within a period of five years she became a general manager. The year 2008 was a high point when KK (as Krishan Kumar is fondly addressed) chose her to be his executive assistant (EA).

Davda had not expected it at all. Her son Param had been born in 2007. She knew she could not put in the long work hours that this position demanded. "And of course KK would be looking at someone with an engineering background," she says.

"I met him for all of 45 minutes and we had no conversation about my career," she recalls. The brief chat with the astute KK was all about life as a mother and about her understanding of the Tata Trust.

"He told me about himself. And I thought he was being polite." She wanted to wriggle out of the situation. "I told him I understand that this was very big and I would not be able to do it and left," she says. A week later Davda, a new mom juggling work and family with great effort, got a call for the coveted position at KK's office.

From here she never had to look back. She got to work on some of the biggest Tata global ventures. She was involved in big ticket deals like that of the Tatas' NourishCo with PepsiCo India in 2010, the Orient Express and of course Tata - Starbucks.

Her most challenging assignment was at KK's office because Tata Tea was undergoing a transformation from a plantation company to a global entity as Tata Global Beverages, it was making acquisitions and had moved its global headquarters to London.

"Turning around a company and bringing about a cultural transformation through acquisitions was challenging," she says.

As a mentor she found KK to be  "very astute" "He shares every professional detail with you and allows you to shadow him," she adds. She was sure he would give her a good opportunity to work in another Tata organisation.

In 2012, when he was forming the senior team for the Starbucks venture KK asked for her views. "Later he told me you know I have spoken to the Starbucks people, you must lead it," she says.

She personally feels she delivered her best at the individual level when she was working for the iconic Taj from 2003 -2005. She learnt a lot there. "It was difficult as I was married by then and if you told people that you worked with Taj, they thought you were a receptionist," she says, smiling.

Davda says two instances left a deep imprint on her and shaped her values as a Tata employee. Both involved Ratan Tata.

Her first brush with Tata was as a trainee. He spent an hour and a half to each TAS member. Later, as an employee, she met him whenever in the course of her work, she needed to.

"I have had the fortune of seeing him more closely than many others," she says. He is so respectful to women that if in Bombay House (Tata Sons headquarters) a lady is waiting for the elevator, he as chairman will never step ahead of her.

Davda recalls the time the Tata Nano Singur controversy erupted and the Tata management decided to shift the manufacturing unit from West Bengal. Ratan Tata called a press conference in October 2008 to make the decision public.

Davda relives that moment, a little emotional. From the press conference where he faced a barrage of hostile questions, Tata headed directly for the Tata Medical centre. She recollects she saw then his remarkable capacity to compartmentalize - he spent nearly five hours at the centre discussing plans with doctors and architects.

As a young manager she was struck by his courage. He could have shouted, gone to the hotel or left immediately in his private jet but he did nothing of the sort.

"I come from a middle class background and seeing that I thought there was hope for the country," she adds.

Another memory that lingers is that of the terrorist attack on the Taj on November 26, 2008. Immediately after the attack, not many people wanted to even enter the premises because evidence of the bloodshed was still very much there inside. But Tata went in.  "On the day after the attack this gentleman attended about 21 funerals of people who died in our hotel as well as outside," she adds.

"These two instances will always remain with me as  grow in my career. One needs to be like him."

Does she see a professional life for herself outside of the Tata Group? "Being a Tata person is powerful and guides my professional choices," she says.

Right now she is dreaming big about her current project at Starbucks. It has opened its 35 stores in India so far. She wants to make it a meaningful brand. "It's my baby and I am nurturing it," she says.

She hopes she will deliver as both Starbucks and the Tatas are looking at this market to grow. Starbucks is present in 63 countries across the globe. "So for the next few years I want to focus and deliver on this particular project," she says.

Her son Param now seven, she says, puts her in her place just as her mother used to do when she was young. Param was five and a half when the first Starbucks store opened in Mumbai. He wanted to go behind the counter at the launch but was not allowed to.  Davda told him that people are allowed to go there only after a lot of training. His repartee was swift. How was she better equipped to go there than him, he asked, as she too did not cook at home?

"He is my reality check. He puts me in my place," she says.

A fiercely private person, Davda knows how to get her work-life balance right. She says she switches off her phone after work hours, she plans her holidays and finds time to attend that first dance recital of her friend's daughter or her child's play dates which she hosts on Saturdays. She also cherishes family vacation time.

"I cherish being a mom as much as I cherish being a wife. Those two relationships are more important than work as these are what motivate me," she adds. Her husband Vishal, who she says is a workaholic entrepreneur, understands her need to be equally committed to her own job. "He is very calm and has strong values," she says.

What does she have to say about achieving so much at such a young age? She brushes aside the question saying Tata Group has many such examples.