The big break for Devraj Sanyal, who is the lead singer of a band called Brahma, came in 2004 when he joined Percept D'Mark. 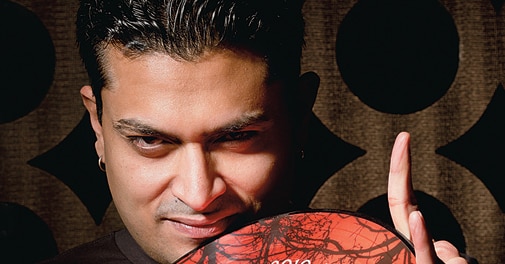 Unlike most top corporate executives, Devraj Sanyal never went to business school. The managing director for India and South Asia at Universal Music graduated in econometrics and statistics from St. Xavier's College, Mumbai. The 38-year-old did, in fact, took the common admission test for MBA schools in the country and even made it to the top 10 list. But he turned an entrepreneur instead and ran his own events and sponsorship marketing business, Curtain Raisers, until joining Elle Magazine as marketing manager in 1995.

The big break for Sanyal, who is the lead singer of a band called Brahma, came in 2004 when he joined Percept D'Mark. The sports and event management arm of media company Percept Holdings expanded rapidly under Sanyal with revenue growing from Rs 3 crore to Rs 300 crore in 2007. He diversified into talent management and live entertainment. He is also one of two brains - video jockey Nikhil Chinappa being the other -- behind Percept's electronic dance music property, Sunburn, which is an almost Rs 100 crore event today.

At Universal Music, revenue has almost tripled since he took over the reins to nearly Rs 100 crore. The bottom line has improved as well. Before he joined, the company was making huge losses with only old Bollywood songs in its catalogue. Today, it is "ridiculously profitable", says Sanyal. Again, his approach to business was unconventional. When the rest of the music industry was investing on acquiring expensive Bollywood catalogues, Sanyal focused on promoting non-film music in Hindi and regional languages as well as devotional music and the more contemporary jazz and rock music.

Sanyal also tied up with English music channel VH1 and Hard Rock Cafe and launched a platform called Contraband, which promotes independent music talent. He also started a talent management arm at Universal Music which manages more than 40 musicians across the country and has organised over 300 live shows. For a man who believes in doing things differently, Sanyal's biggest fear in life is a day when he fails to think out of the box. "I will push the envelope every day of my life," he says.

Consultant with a Difference - Prashant Sarin