How the 20 companies to watch in 2007 have performed

Performance of 20 companies to watch in 2007 in alphabetical order.

ABB
Has managed to keep its growth momentum. In May this year, ABB bagged a Rs 289-crore order from the Delhi Metro Rail Corporation. For the nine months ending September, cumulative revenues rose to Rs 4,136.60 crore, up 42 per cent from the same period last year. Adlabs
Is foraying into the highly lucrative segment of 3D animation mega-production movies with Sultan the Warrior. Adlabs has entered into an agreement to buy the cinema exhibition business of Rave Entertainment. In January, it acquired a controlling stake in Siddhartha Basu-owned TV content company Synergy Communications.

Aircel
Is in an expansion mode. Early this year, it paid Rs 1,350 crore to the department of telecom towards entry fee for licences in 14 new circles. Aircel, with services in nine circles, has set a target of 8 million subscribers in 2007-08.

BHEL
Bagged a $38 million (Rs 152 crore) order from UAE in October this year. BHEL has posted an impressive increase of 91 per cent in net profit for the second quarter ended September as against the same quarter last year.

Bill Desk
Fairly smooth sail for the firm which has found willing takers among corporates, banks and institutions for its bill-related solutions. Backed by three ex-Arthur Andersen professionals, it continues to focus on internet-based products.

DLF
While it continued its impressive performance, DLF acquired a 38-acre prime property from DCM Shriram Consolidated in West Delhi for Rs 1,675 crore and also won the contract to develop New Bangalore at Bidadi in Karnataka.

Dr Reddy’s Laboratories
A mixed bag for the pharma giant. It registered 4.5 per cent decline in the profit for July-September quarter to Rs 267 crore from Rs 280 crore in the same quarter last year. The high points: It opened its 40th overseas office in Nigeria and secured an exclusive licence to sell dermatitis drug Sebclair in the US, which has a $5-billion market there.

Ginger Hotels
Its bouquet of basics has spelt success. The eight-hotel chain will have double the hotels up and running by March 2008. Research firm KPMG estimates the demand-supply gap in hospitality industry to be more acute in the budget segment than in the luxury segment.

GMR
Has established itself as a frontrunner in the core infrastructure areas with its projects on airports, agriculture and power. After winning the contract for Sabiha Gokcen International Airport (SGA) at Istanbul in Turkey, the group is eyeing airport projects in Belgium, Portugal, among others.

Idea Cellular
With a subscriber base of over 18 million, Idea has cornered a 12.18 per cent share of the Indian market. The future buzz: It might get some more spectrum in leading circles like Mumbai.

L&T
In October, the company floated a new arm, L&T Power Projects, to foray into the thriving power generation business. L&T in consortium with Paul Wurth bagged a Rs 1,205-crore contract from Bhushan Steel. It has also acquired a stake in the switchgear business of Malaysia’s Tamco. 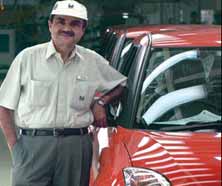 Maruti
A smooth drive for the car major with the successful launch of Zen Estilo and SX4. Next on cards: $1.8 billion (Rs 7,200 crore) R&D facility in Haryana. Its joint venture with Magnetti Marelli of Fiat S.p.A will invest Rs 750 crore for setting up a facility at the suppliers’ park of Maruti at Manesar.

Praj Industries
Recently declared the commissioning of its manufacturing unit at Kandla SEZ. In September this year, Tata Sons picked up 14.7 per cent stake in the company for Rs 338 crore.

Reliance Retail
Not a smooth sail for its ambitious plans. Reliance Retail opened the first 300 stores in 30 cities in the last one year. It has set its sights on 500 such stores by 2010. The roadblock: Unabated protests against its Reliance Fresh stores in some parts of the country.

Tata Steel
The behemoth recently launched its first branded cold-rolled steel, Tata Steelium, in Sri Lanka with an eye on the auto-ancillaries sector in the country. Rising prices of steel and raw material may benefit Tata Steel over the next few quarters because of its fixed cost structure.

TransWorks
In a recent survey, TransWorks has been ranked #2 on the basis of BPO services exports. However, with the rupee gaining against the dollar, TransWorks margins can come under pressure as close to 90 per cent of its revenue comes from North America

Videocon
Consumer electronics biggie Videocon group is in diversification mode. The group announced it would bid for the Greenfield airport at Navi Mumbai, while committing Rs 3,000 crore as the initial investment in the aviation sector.

Twenty companies to watch in 2008