Put four hotshot headhunters in a room and what do you have—either a recipe for name-dropping and name-calling; or a magic list of the country’s 25 hottest young executives.

Put four hotshot headhunters in a room and what do you have—either a recipe for name-dropping and name-calling; or a magic list of the country’s 25 hottest young executives. Business Today was obviously looking for the latter. Last fortnight, R. Suresh, MD, StantonChase International, Hastha Krishnan, CEO, Ma Foi Global Search Services, Shilpa Gentela, Client Partner, Korn/Ferry International, and Purvi Sheth, VP, Shilputsi, got into a huddle in Mumbai to pick out these wunderkinds of India Inc. 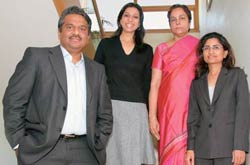 The headhunters’ team
Though they could not participate in the roundtable, Arun Das Mahapatra, Partner (in-charge), India, Heidrick & Struggles, and Preety Kumar, Managing Partner, Amrop International, also assisted with the list. The criteria: They’ve got to be 40 or under; they have to be executives on the fast track, headed for leadership positions; with an unswerving track record; and they should have made a significant mark in the organisation they worked for in the past one year. Each of our good headhunters drew up their individual lists of favourites, which were then thrown into one big hat. There were a few names that were on most lists, but then there were also names that not everyone could agree on. So, inevitably more than a few bigwigs had to be duly dust-binned, much to the chagrin of some of our search champions. And with a little help from Business Today’s editors, the panel was able to draw up a shortlist of some 35 names. A few names fell off the list because these honchos had crossed over into the zone in which they’re still doubtless ‘hot’, but alas no longer youthful. Forever Young was a great film (starring Mel Gibson and Jamie Lee Curtis), and an even better song (by Bob Dylan); unfortunately, only those that made the age cut got a chance to ‘build a ladder to the stars and climb on every rung’. In this list, it doesn’t matter if you are Forever Young.