Almost a kilometre behind the gleaming gates of Hyundai Motor India's factory in Sriperumbudur, off the Chennai-Bangalore highway, is the stockyard. It is full to the brim with 32,000 freshly manufactured cars. Nearly one-third of them are bound for distant shores. Hundreds of Hyundai's blockbuster i10 cars will leave Chennai Port for countries such as Algeria, Colombia, Guatemala, Kuwait, Mexico, Morocco, the United Arab Emirates and the United Kingdom. A worker takes down finished doors from the welding line
In 2010/11, Hyundai Motor India was India's largest exporter of manufactured goods, sending more than 250,000 India-made vehicles to over 160 countries and territories. Its 15-year-old Sriperumbudur factory - Hyundai Motor's first outside South Korea - has helped Hyundai power into the global big league of carmakers. A complete unknown when it introduced the Santro in India in 1997, Hyundai is now the second largest car-maker and second largest passenger car marketer in India. In 2005, the parent decided to invest an additional $1 billion (it has invested a total of $3 billion in India to date) to build a second assembly line, called Plant-II. At that time, it decided India would be the only production hub for its then planned 'PA' car, which turned out to be the i10. 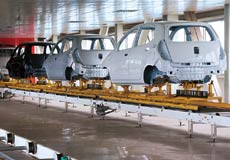 Painted i10 body shells are poised to go on the final assembly line
More than half of i10s are exported. At first glance, the i10s made for export look like the ones sold here. But there are many differences. The wheel covers, for example, are different. So are the tyres, upholstery, and entertainment systems. Besides, automatic transmission is standard in cars made for export, and most of them are left-hand drive. Tweaking manufacturing processes for such seemingly small differences can be a logistical challenge. And given that Hyundai's cavernous Plant-II can make more than 1,000 variants - more than 750 of the i10 alone - it could be a nightmare. 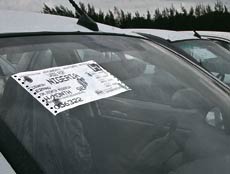 A sign taped inside the windshield indicates the destination of each car
But Hyundai Motor India cannot afford nightmares. In the sluggish global economy, the demand for cheap, small, fuel-efficient cars is rocketing, and Hyundai is racing to keep up. Its Sriperumbudur plants were designed to produce 600,000 cars. By wringing every ounce of efficiency from them, more than 650,000 vehicles are expected to roll off the lines this year.

The person in charge of ensuring that all goes according to plan is T. Sarangarajan, Vice President, Production, Hyundai Motor India. He has been with the company since it broke ground for the facility in 1996. Plant-II, he says, is "by far the most advanced car manufacturing facility in India". There are very few plants that can mass-manufacture so many variants of an affordable small car, he says. Workers wearing protective cushions screw on the roof lining of a car
Flexibility in manufacturing is built into the plant and workers' training. The production schedule is decided just a few days before production starts. But the countdown begins months earlier, when Hyundai's marketing affiliates across the world send in their orders to its plants in South Korea. These could be for the yellow Santros that serve as taxis in Colombia, sporty i20s for Australia, or Eon variants for India.

Three months before production starts, Sarangarajan and his team draw up a tentative production schedule after considering several factors, such as delivery dates, colours, and the amount of components that need to be imported from Hyundai's other facilities. A month before production, the list is finalised.

When only a few days are left to go, the order of production is decided. The schedule is shared with vendors, who send components in the order required. Pankaj Mital, Chief Operating Officer, Motherson Sumi Systems, whose joint-venture subsidiary, Kyungshin Industrial Motherson, supplies wiring harnesses to Hyundai Motor India, says the carmaker's requirements may seem complicated, but they streamline the assembly process. "A lot of work goes into making this look easy," says Mital. Some vendors even send staff to the Hyundai factory to ensure that the parts they supply are in the exact order in which they will go into the car. 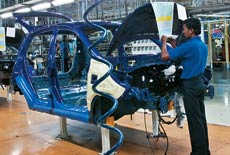 A worker reads assembly instructions for the car as it moves along the line
Sarangarajan says rival plants also produce dozens of variants of their cars for export, but Hyundai's innovative process lets it make any car at any time, as long as the components are available. "Our rivals have batch production, which means that several cars going to a certain market are manufactured together," he says. "We have total production flexibility. If the next 700 cars are all different, the plant and the workers on the line can produce them."

More than 5,000 i10s, all headed overseas, wait in the stockyard at Hyundai's manufacturing facility in Sriperumbudur
There is so little wiggle room in Hyundai's process that disruptions anywhere in the chain often require costly solutions. One of Sarangarajan's biggest fears is delays at Chennai Port. "Forget the delays going out, there have been times when we flew parts in from South Korea due to port delays," he says. "Our production order has to be maintained, even if we make a loss."

Hyundai officials are tight-lipped about the new factory said to be planned in Gujarat. Sarangarajan says any future project will build on the learnings from the Sriperumbudur plant. "We pride ourselves on building such a complex factory that makes things look so simple."

Why private life insurers are struggling to find their groove