San Engineering and Locomotive has done well in a difficult environment. 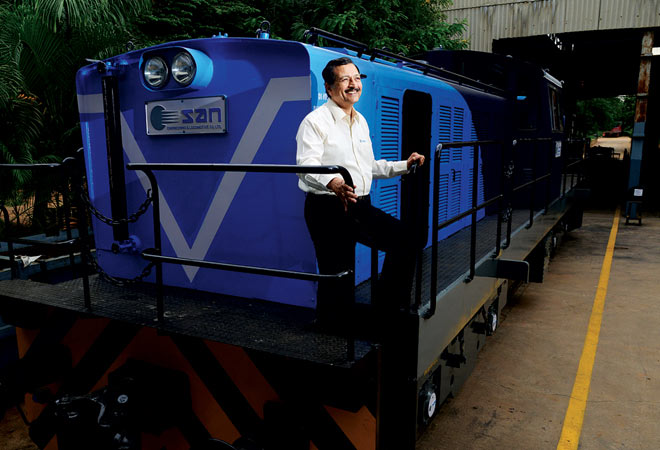 This chaotic area, a Mecca of services companies, is an unlikely setting for a manufacturing company to thrive. But this is exactly what San Engineering and Locomotive (SEL) has done. SEL may be small, but is pugnacious and has taken on the competition. The company, which calls itself the only 'organised private sector rail vehicle manufacturer' in India, has shown impressive growth during the last five years. SEL was incorporated in 1969 by two railway engineers. The current management "took over the company in the mid-80s", says Narayanan Ramanathan, the rather taciturn Chief Executive of the company. SEL has a large 32-acre land parcel in the area where it makes over 500 types of gear boxes for varied applications, apart from locomotives, transmission systems, shafts and axle drives. Its gears - spur, helical, bevel and planetary - are used by cement, steel, sugarcane and defence companies. They are also used in cranes and windmills.

In locomotives, it builds diesel hydraulic, diesel electric and special locomotives, including flame-proof and narrow-gauge models. For the defence sector, it produces planetary gear boxes used in battle tanks.

SEL, which counts Indian Railway, ACC, Tata Steel, BHEL and BEML among its marquee customers, delisted from the bourses in 2005. In the past four years, its revenues have grown by 250 per cent and were $30 million in 2014/15, says Ramanathan. The growth has been driven by newer segments, expansion of the product portfolio and emphasis on after sales and support.

"Today we get approximately 20 per cent revenues from after sales and support. We want to take it to 50 per cent," says Ramanathan. He says their products are 'well-engineered and built to last.' The company also has a manufacturing unit in Mysore. While the Bengaluru plant is for hydraulic and electric locomotives, special vehicles, power packs and drives, the Mysore unit focuses on producing all kinds of gears & gearboxes apart from Cardan shafts. SEL employs about 500 people at these two locations.

Exports is another area the company wants to focus on. "We have in the past exported to several African countries and the Middle East. However, this is where as an SME we hope that some government support and handholding is forthcoming," says Ramanathan.

A case in point is a recent order, worth Rs 56 crore, from the Sudanese government. The size of the order was almost a quarter of the company's annual revenues. However, no financial institution was ready to fund the company because of the current unrest in Sudan and sanctions on the government there. Consequently, the company could not execute the order.

"While on quality we are on a par with the best in the world, we still suffer. China, for instance, supports its exporters by offering preferential credit to those who buy from its exporters," says Ramanathan.

The good thing, says Ramanathan, is that when they wrote to the Prime Minister's Office on the issue of the Sudanese order, they received a response directing them to the Ministry of External Affairs, "which is more than what we got in the past."

"If India's 'Make in India' aspirations have to become a reality, things for players like us need to improve," says Ramanathan. One can hardly disagree with that.

Symphony has scripted a dream turnaround