The Genie on Your Bottle

Control Print aims to garner 25 per cent market from the present 16-17 per cent in next five years. Have you bought a bottle of mineral water lately? Or a chocolate bar, perhaps? You would notice the small printed matter mentioning the batch number, date of manufacturing, expiry date, and so on. Such printing is done by extremely high-tech, sensitive printers such as continuous inkjet printers or CIJs (for printing on bottles and packages), thermal transfer printers (wafer and biscuit packets), laser printers (auto components, semiconductors, PC components). And companies that make such printers and their consumables are considered part of the coding and marking industry.

"Coding and marking is a legal requirement," says Shiva Kabra, Director of Marketing at Mumbai-headquartered Control Print. "It is also important for traceability; for instance, printed batch numbers help identify batches in case of a product recall." In the three years leading to March 2014, the company's topline has grown at an average 14 per cent to reach Rs 93.8 crore, with net profits of Rs 14.1 crore. And in 2014/15, topline has reached Rs 112.92 crore and net profit Rs 19.15 crore. Margins, too, have improved. "Consumption has grown in India, so the consumer and packaging industries have also grown," says Ekansh Mittal, Founder of Katalyst Wealth, who also owns some stock of Control Print. "These factors have helped Control Print grow."

KEY FACTS
Its plants in Nalagarh in Himachal Pradesh and Guwahati in Assam manufacture a wide range of coding and marking printers, and inks. Control Print sells about 1,500-2,000 printers a year. Printer prices start at Rs 75,000 and go up to Rs 3.5 lakh. Ink prices are Rs 6,000 to Rs 10,000 per litre.

FULL COVERGAE:India's best SMEs 2015
Established in 1991 by Shiva's father Basant Kabra, Control Print has made admirable strides in the coding and marking industry. The company has a wide range of customers, including Holcim, ACC, UltraTech Cement, Unilever, Emami, and Tata Steel. What makes its achievement more special is the fact that this business is very technology-intensive, and specialised. "There are only about 12-13 companies in the world that make such printers and inks," says Shiva Kabra.

Basant Kabra, the son of a silver merchant, did his chemical engineering from Nagpur, and initially started a polymer manufacturing company in Mumbai, with a plant in Baroda. After splitting with his partner, he got into the coding and marking business. In the beginning, the company would distribute products of Videojet Technologies and a couple of other companies. "The initial days were tough," says Kabra, Managing Director of Control Print. "It was difficult to get people to join the company because it was small. We decided to list it in 1993, so that people have confidence in the company." To assure customers, Control Print established offices in about eight cities for providing customer service. "Our first breakthrough came with Pepsi, which was setting up a plant in the late 1990s, and wanted a lot of printers," says Kabra, adding that in those times, even manufacturing companies were not buying coding printers. 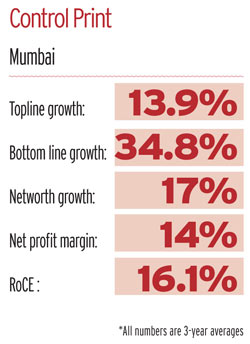 Around 2007, the partnership with Videojet broke up, and thereafter, Control Print tied up with Germany's KBA-Metronic AG for CIJ printers, and decided to get into manufacturing to be cost competitive. "We have some 8-9 partners right now for different technologies, and we manufacture all their products under licence in India," says Shiva, who worked as an investment banker in New York till 2005 after doing his MBA from INSEAD, Singapore.

The company made a couple of strategic decisions in the past few years that have borne fruit. It started to localise as many of the printer parts as possible. It has done this on two fronts - by developing some of the parts itself, and by urging suppliers to raise their bar and produce better quality parts. Today the company has achieved localisation of parts to the tune of 96 per cent.

"We are looking to develop some new products ourselves in some new fields, like thermal inkjet technologies, so that we are at the cutting-edge," says Shiva. The company currently exports in a small way to Sri Lanka and Bangladesh, but plans to expand to other South Asian countries and beyond.

The Indian coding and marking market is dominated by four companies - Videojet, Domino Printech, Markem-Imaje India and Control Print. According to Shiva, Domino is the leading player with about 32 per cent revenue market share, Videojet has 27-28 per cent share, Markem-Imaje about 22 per cent, and Control Print has 16-17 per cent market share. As per numbers available with Registrar of Companies, Domino had revenues of Rs 170 crore in 2013/14. Back-of-the-envelope calculations show that the entire industry size is about Rs 550 crore-600 crore. Industry estimates peg the growth rate at about 12 per cent. Control Print aims to garner 25 per cent of the market in the next five years.

The company is bullish on future growth as packaged foods and other products increase, and as manufacturers pay greater attention to the quality and type of information printed on packages. There's another twist. "We manufacture our printers in a way that they support all Indian languages, be it Hindi or Bengali, or any other," says Shiva. Citing the example of Europe where exporting companies need to ensure that key information is printed in multiple languages, including the language of the destination country, the father-son duo feels that in India, too, all packaging should have key information in local languages besides English and Hindi.

But there are always challenges on the horizon, sometimes unexpected. As Katalyst's Mittal says: "It is a very technology-driven business, and it is difficult to see what new technologies might come up. That's where the major challenge would come from for Control Print."