Ashok Minda's first brush with sellers of car parts overseas was in 1984. Still an undergraduate, he had gone to Hong Kong to buy the proverbial bells and whistles for his Premier Padmini. The Padmini was one of three car models available in India at that time; the Maruti 800 had hit the roads just months earlier. And if you wanted to embellish your Padmini with a sunroof and power steering, as Minda did, you had to go looking overseas.

No one would have guessed then that two decades later Minda would ignite a process that would transform the Indian automotive component industry , putting it on the global map and on the order sheets of the world's best and biggest carmakers.

Click here to Enlarge
The period between 2005 and 2007 was most eventful for the Indian car industry. It saw the launch of the Swift, which changed the attitude and outlook of Maruti Suzuki, the largest carmaker by far, but one that was not seen as making the most attractive cars until then. That was also the period when Hyundai Motors India launched the i10, which revitalised a company that was finding it difficult to come to terms with the Santro's fading charms. And that was when Carlos Ghosn went to Nashik to sign a pact with Anand Mahindra to make the Logan.

Around the same time, far away in Germany, a quiet meeting was on between Minda, now the Chairman of Minda Management Services, or MINDA, an auto component manufacturing company he inherited from his father, Shadi Lal, and the head of KTSN Germany, a supplier of interiors to Volkswagen, Europe's largest manufacturer of cars. MINDA's turnover was barely Rs 400 crore then, but it overreached itself to buy KTSN in 2007 for m48 million, which at that time was equal to Rs 265 crore. The acquisition paid quick dividends. "The next year Volkswagen decided to come to India. It is with them that we entered the interiors business," says Minda. 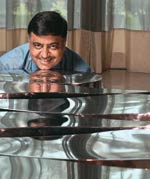 Ashok Minda, who had gone to Hong Kong to buy accessories for his Premier Padmini in 1984, has acquired three foreign component makers in the last five years
Two more acquisitions of overseas companies later - of Czech firm Schenk Plastic Solutions, which makes interiors, and Aksys, a German company making seats - MINDA's turnover is sniffing Rs 3,000 crore. Other than Volkswagen, its clients include Mercedes and BMW, the two biggest luxury carmakers in the world.

Baba Kalyani's Bharat Forge and Amtek Group struck more blows for the Indian industry. Kalyani acquired Carl Dan Peddinghaus in 2003 to become the world's second largest in forging after Thyssen Krupp while Amtek gobbled up Smith Jones in 2004 and Triplex Ketlon in 2007. However, as Jatin Kammar, an analyst with rating house ICRA points out, Bharat Forge and Amtek were strengthening their existing businesses, acquiring technical capability or customers, while MINDA's deals put it in newer businesses.

Until Indian component makers began to go outside the country and make acquisitions, the native industry was seen as playing a mere supporting role to global manufacturers, making its mark mostly in small parts like radiator caps or fasteners, parts which earned Chennai-based Sundram Fasteners recognition and quality awards. The string of acquisitions filled the industry with confidence, spurring it on to become a global supplier of critical components.

It is not for nothing that the industry's turnover has nearly doubled to $40 billion in the last five years. Nearly one-eighth of it - $5.2 billion - is from exports. The jump in turnover could not have come from these three companies alone. And it has not. The Chennai belt, one of the oldest automotive hubs in the country, has changed beyond recognition.

Click here to Enlarge
Lucas-TVS, with factories in Chennai, used to make nearly all its money in the seconds market, where parts are bought for repairs. "Now we supply directly to OEMs," says Arvind Balaji, Joint Managing Director with the company. OEMs, or original equipment manufacturers, is the industry term for companies which roll out fully built vehicles. Balaji has sent his engineers to South Korea and Germany to understand new technology and engineering.

A decade ago, Wheels India, whose factory is located a short distance away from that of Lucas-TVS, just supplied wheel rims to Indian companies. As Indian companies, led by first Hyundai and then Maruti, ramped up their exports, things changed for Wheels India. Srivats Ram, its Managing Director, says the company learned a lot from global platforms being launched in India.

mosimage"When multinational companies came in, they came with their own systems. We learned from them." Now Ram's company exports rims for mining vehicles and trucks in Europe. With its factory on the outskirts of Chennai, Ford India is witness to this rise up the value chain. Says its President and Managing Director, Michael Boneham: "India is No. 3 in the engineering hierarchy for us. We can't keep importing components; they have to be available here."

Not very far from Chennai, in Takata and Mahle, Anand Group's factories, which churn out the Gabriel brand of shock absorbers and axles, earn a tenth of their Rs 5,000-crore turnover from overseas. Gabriel is one of the best-known brands in the United States. Anand's axles are also used in the vehicles of UK-headquartered Jaguar and Land Rover, now owned by the Tata Group. "The labour cost arbitrage was not going to last forever," says Deepak Chopra, Anand Group's CEO. So the company made investments in automation to rise to global standards.

Help has come from a change in strategy by global carmakers, which these days focus mainly on the core of their vehicles, such as engine and transmission, and are happy to source most of the rest from vendors as ready packages. For instance, Rane TRW Steering's international career started when Mahindra Renault, born out of Ghosn's visit to Nashik, decided to buy steering systems from it. It was not easy. "When they gave the specifications, we found that the requirement was of a higher order [of quality] than we could do," says Harish Lakshman, Rane's Managing Director. It took the company nearly two years to come to grips with Renault's demands. It increased the number of its engineers and doubled capacity. Today, even as Renault and Mahindra have gone their separate ways, Rane supplies 150,000 steering systems to the French company.

Hero Motors, part of the extended Munjal family behind the Hero group, has embarked on a Rs 120-crore expansion. It had to, after it bagged a five-year contract worth $200 million from European automakers to supply transmission assembly - a large and critical part of a car, which in the earlier years was thought to be beyond Indian companies' wherewithal. "After you start a contract the most important thing is to continue the contract," says Pankaj Munjal, Managing Director, Hero Motors. Delivering complete solutions like the chassis assembly fetches Munjal a 30 per cent margin on earnings before interest, tax, depreciation and amortisation, compared with just eight per cent on single components.

mosimageHowever, it is not going to be a happy ride for all. Auto Component Manufacturing Association, or ACMA, the industry lobby, expects some companies to disappear. "Tier-II suppliers will supply to Tier-I suppliers and Tier-I suppliers will become system integrators," says Vinnie Mehta, ACMA's Executive Director. As carmakers opt for fewer platforms, the basic structure on which a vehicle is built, the bigger component suppliers will gain in scale while the smaller ones will get squeezed. For instance, a supplier of critical components to Volkswagen's Vento can also cater to its twin, Rapid, made by sister company Skoda. The same goes for VW's Polo and Skoda's Fabia.

The next few years will therefore see consolidation. Ashok Minda, meanwhile, will be plotting to get to his next target: Rs 11,000 crore in turnover in four years.