The sixth BT-cirrus study reveals which CEOs, companies and groups got the best press in 2008-2009.

One Of the most important lessons exemplified by Nobel Laureate Richard P. Feynman even as a teenager was: What do you care what other people think? But, as a young researcher at Princeton University, it was his first wife Arlene who had to remind him of this principle when the shy scientist—later to emerge as one of the most brilliant theoretical physicists of his century—tried to scrape off a love note that she had composed and then printed on his office pencils, or declined to cook steaks right by Route 66. Feynman would later write a bestseller by that name: What Do You Care What Other People Think? Ratan Tata ranked No 1 in image
No CEO or company in today’s world can say this, what with the explosive growth of media, from newspapers to television, from the Internet to Twitter, over the past decade. With politics and business linked inextricably, managing headline presence can become a case study in the theory of unintended consequences: a visionary industrialist’s project that has the potential of shaking up the business of carmaking gets delayed and instead powers the resurgence of a politician with no concrete ideas of development.

As the BT Newsmakers Special enters its sixth year, companies are shovelling more and more money and resources into public relations and image building, either by internal or external agencies. The importance of good PR and image is embedded in every CEO’s strategy, whether the company is looking to mine in a distant forest away from the prying eyes of the media or lure SEC-A buyers of jeans in the metros with an exercise in unbuttoning. An idol created painstakingly can vaporise with just one “bad” headline. Case in point: B. Ramalinga Raju, the now-disgraced and jailed Founder-Chairman of Satyam Computer Services.

His accounting skullduggery at Satyam, completely at odds with the image he had acquired, made him the first CEO in recent years to get a negative Quality of Exposure (QoE) score in the 2009 BT listing (any score below 100 is negative; see methodology). Raju’s shenanigans, although a solo act, tarred his company so much so that, when it was put on the block, no global name rushed to buy it.

If Raju had a negative QoE, he also got the highest score in visibility rankings. But visibility has its other face as well: Raju was followed by Ratan Tata, a man of unimpeachable character whose dream of building the world’s cheapest car landed him into a political maelstrom and got him more square inches of media coverage than any body else barring Raju. Fortunately, Tata and his group emerged from the Singur imbroglio with their reputation and integrity intact, if a bit dusty. 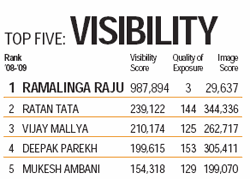 Tata, whose empire has its own PR army, must have realised the value of its external agency during every step of the Nano’s agonising aborted gestation at Singur in West Bengal. The Tatas, like any other company or group, do not reveal their specific PR spending, but every rupee they paid seems well justified, going by just the daily firefighting, perish the thought of influencing people and getting their way.

So, how does this newsmaking thing work? Do headlines come to you or do you have to go looking for headlines? To people like Tata, headlines don’t matter; dreams do. So, the world watched with bated breath as his Nano project battled a disgruntled Opposition.Tata was also in the news for the financial troubles with his Jaguar-Land Rover deal, but it was Singur that kept him constantly in the headlines. Mallya was more of an all-rounder, feeding off the media buzz created by his Royal Challengers cricket team at the Indian Premier League, the travails of Kingfisher Airlines, the progress of his Formula 1 team Force India, his penchant for being the white knight at auctions of India’s heritage, et al. Then, there are people like N.R. Narayana Murthy and Nandan Nilekani, who are persona in their own right with rankings way above their legendary company, Infosys.

HDFC’s Deepak Parekh saw his scores shoot up in January 2009 when the government roped him in to salvage Satyam. Even otherwise, his reputation as a crisis manager keeps him in the news the year round. Mukesh Ambani, ranked fifth on the image front, was more like Tata, focussed on growing his vast business empire. 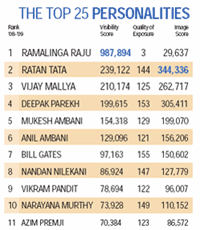 Click here to Enlarge
As we study cover-story CEOs and companies, the question arises: what makes a CEO or company newsy? Does the CEO/company make the news or does the news make the CEO/company? Headline space is as important for companies as it is for their CEOs, but sometimes a company has to live in the shadow of its CEO’s image, and is defined by it. Example: Mallya and his Kingfisher Airlines. Sometimes, the organisation’s image is all powerful and a succession of CEOs comes and goes uneventfully. Example: State Bank of India. Then again, an attempt to create a positive image can backfire horribly if the CEO and his organisation work at cross-purposes or live in different worlds. Remember what happened to the third player in the Nano drama: West Bengal’s Marxist Chief Minister, Buddhadeb Bhattacharjee, who began his second innings by turning Left ideology on its head? Capital of any colour is welcome, he said, rolling out the red carpet for big industry. Bhattacharjee the CEO was the toast of the town as Tata announced Singur as the location of the Nano project. But the Chief Minister’s administration was still in the British empire mode, following a land acquisition law of the 19th century. The Singur land protest became legend. Bhattacharya became toast. 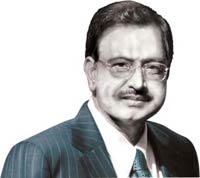 R. Raju ranked No 1 in visibility
Then, consider companies like Kingfisher and Jet Airways. Both found themselves in negative QoE territory—not for any malfeasance a la Satyam, but for the environment in which they found themselves in. Soaring aviation fuel prices, high taxes and airport charges were breaking their backs. So, they attempted some pretty radical management steps and got plenty of bad press. (Remember Jet’s tearful cabin crew on street protests?)

At the other extreme, SBI does not go looking for headlines. In fact, its Chairman doesn’t even find a place on the list of top 25 personalities. He doesn’t have to: when SBI sneezes, the economy can catch a cold. So, sometime during the year, SBI decided to stop tractor loans, close on the heels of a government decision to waive agricultural loans. Oops! That was a big no-no for the political regime. SBI had to backtrack. SBI decides to cut home loan rates? Rivals fume, borrowers queue up, never mind SBI’s assurance that applications will be cleared in a fortnight (yes, a fortnight. Not over the table, not in 10 minutes). 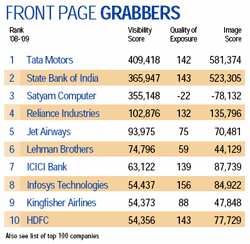 At the global level, following the financial meltdown, there was the insurance giant AIG and its bid to hand out large bonuses to its staff after it had taken financial aid from the American people to survive. It later turned out that a) the bonus payments were going to people who had nothing to do with the original mess and b) they were properly contracted payments! But AIG and its CEO became a symbol of corporate greed.

Overall, 2008-09 saw many more companies getting into headlines than in any other year. The scores also look huge, but this is because of a slight change in methodology. Indra Nooyi ranked No 1 in quality
Well, every year companies find themselves in the news, but this seemed to be a year when external events propelled them into the news whether they wanted to be there or not. That brings us to another category of CEOs and corporates—those who were in the news, more because of their positions on issues than because of any specific things they had done. Halt a passerby and ask him: “Excuse me, sir, why is Infosys famous? Can you name a product that it makes?” The answer is likely to go on these lines: “Ah, umm, let’s see… Well because it does work globally that makes Indians proud?… No, I can’t think of any product.” So, Infosys is defined by the vision of its founders, their ethics and the success of their business model. Which is why a Narayana Murthy or a Nilekani can speak on even civic governance or the country’s future—and grab eyeballs and headlines. So far, the BT Newsmakers Specials have not come up with Indian CEOs or companies who evoke outrage by actions that are perfectly justified by their business model. The outrage gives them a media presence that they seem to love, but would leave any Indian company cringing. So, we have no Ryanair, the low-cost UK airline that offers fares lower than road traffic, but adds on baggage charges, booking charges et al, leaves you at an airport in the middle of nowhere—but is tolerated grudgingly because it made air travel affordable for all.

Recently, its CEO made headlines for saying that it was thinking of charging passengers £1 for using the toilets in its aircraft. Apparently, only technical issues are holding it back—the toilet doors are too thin to house a coin collection gadget and the aircraft maker has been asked to see if a card-swiping machine can be slotted in.

Contrast this with Tata Motors’ reassurances— before the Nano was actually unveiled to rave reviews—that the small car would meet all relevant safety standards, without any compromise on quality. And yes, the world’s cheapest car would also be a proper car, not stuck together with glue, not made of plastic, not something that would leave tall passengers tasting their knees!

Image as the CEO's KRA?