Business Today presents an annual listing of India Inc.'s fastest growing large, mid-size and small companies based on their revenues.

Companies with revenues in excess of Rs 2,000 crore that grew the fastest in 2007. Ajai Chowdhry
How does the information technology revolution begin? As a box, and that explains why HCL Infosystems has been on a burn. As the IT and communications market (read software services, outsourcing and the mobile boom) has exploded in India, so has HCL’s own growth. From Rs 2,705 crore in 2002-03, it now logs Rs 12,599 crore in revenue (annualised, ‘07-08) while net profit has soared from Rs 93 crore to Rs 313 crore (annualised) in that time. That translates into a compounded annual growth rate (CAGR) of 45 per cent. Interestingly, it’s the cellular boom that has been driving HCL’s growth more than the growth in computers and servers. For example, in 2003-04, its revenue from its telecom and office automation (primarily a distribution business) were a relatively modest Rs 2,877 crore, but at last count it stood at a whopping Rs 9,259 crore—a CAGR of over 30 per cent. Says Ajai Chowdhry, HCL’s co-founder and Chairman: “India is still an undersold IT market and there is immense upside for our business.” In the years ahead, he expects HCL’s systems integration business to drive growth. “Over the next 10 years we expect it to become a $2-billion business for us,” he says. E. Sudhir Reddy
Five years ago, if he landed a RS 200-Crore infrastructure project, E. Sudhir Reddy would be giddy with excitement. Today, the Chairman and Managing Director of Hyderabadbased IVRCL Infrastructures and Projects (IVRCL) juggles projects worth Rs 800 crore without batting an eyelid. While that’s a sign of the growing investment in infrastructure projects in the country, it’s also evidence of the 21-year-old company’s shift into top gear. Starting out as a builder of small water-based projects, IVRCL has diversified into big-ticket projects related to road, building construction, transportation, power, water supply and irrigation. The happy result is that it has been growing its top line at a CAGR of 52 per cent since 2004-05. Today, nearly half of its top line of Rs 3,700 crore comes from irrigation and water projects, a little over one-third from transportation and power, and the rest from building and construction. Reddy attributes his company’s rapid growth mainly to three things: entry into long-term supply contracts, delegation and employee motivation through ESOPs. “Quick reaction time to problems with a feet-on-the-ground-approach has also helped,” he adds. A case in point: its Rs 315-crore Veeraman Drinking Water Project in Chennai that was completed in a record 15 months (against the norm of 21-24 months) despite certain challenges. With an order book of Rs 13,000 crore, Reddy will need lots more of his quick wits. R. Sridhar
Like the trucks it finances, it’s been a long haul for Shriram Transport Finance (STF). Founded in 1979, it wasn’t until the late 90s that the Mumbai-based firm could prove the legitimacy of its business model, which centred around financing commercial vehicles. “Everyone considered this business high risk because the loans had no collateral to talk of,” says R. Sridhar, STF’s Managing Director of 22 years. Today, it’s a different story. Everyone from private equity investors (TPG Newbridge and ChrysCapital) to hedge funds (Tiger Global and Ridge) are investors in STF, whose asset under management has grown from Rs 2,500 crore in 2001-02 to Rs 12,500 crore. “We expect this figure to double by 2010,” says Sridhar. To stay on the growth track, Sridhar is looking at more opportunities. STF has started offering top-up loans for tyres and engine replacement. It has tied up with other partners such as Axis Bank and HPCL to offer credit cards for its customers; it has a deal with Ashok Leyland for freight exchange and freight bill discounting (a bridge financing service); and an arrangement with sister company Shriram Life for life insurance products for its customers. “We feel that these truck owners are the unsung heroes of the Indian economy,’’ says Sridhar. Perhaps, STF too. Sanjeev Aga
Although it’s been around for more than a decade now in different avatars, Idea Cellular is, effectively, just two years old. That’s when the Aditya Birla Group bought out the Tatas in the venture and hit the road with a vengeance. Result: While it took Idea Cellular (earlier called Birla-Tata-AT&T) 10 years to rack up its first 10 million subscribers, it took less than two years to add the next 10. Today, with a customer base of more than 24 million, Idea has a market share of 16.2 per cent in the 11 circles it operates in (end of March, 2008). In 2007-08, Idea’s net sales grew more than 54 per cent to Rs 6,719.99 crore and PAT by a jaw-dropping 108 per cent to Rs 1,044.39 crore. “We were able to expand the market by reaching out to previously unconnected areas. Our infrastructure sharing and licensing has also contributed to profitability,” explains Rajat Mukarji, Chief Corporate Affairs Officer, Idea. Last year, Idea grew its subscriber base to 24 million from 14 million—a growth of 70 per cent. However, average revenue per user (ARPU) continues to be a(n industry-wide) problem. In March 2007, ARPU was Rs 317 and by the quarter ending March 2008, it had fallen to Rs 287. With major players, including Idea, dropping call rates, ARPUs may fall some more. Idea isn’t too worried. It plans to focus on value-added services besides pushing farther into unconnected areas to keep growing. 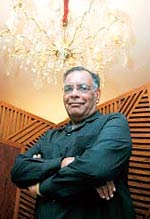 B.D. Mundhra
It’s not just riding the infrastructure wave, but doing a good job of ‘wave hopping’ to keep surfing. Simplex Infrastructures’ diversified portfolio within infrastructure—it is into urban infrastructure, industrial construction, marine, power, and oil rig projects—has ensured that it stays immune to a slowdown in any one segment. That explains why its three-year CAGR is a robust 39 per cent. “We have been progressive and have maintained our robust growth consistently,” says B.D. Mundhra, Chairman and Managing Director of the Kolkatabased Simplex.

What’s also impressive is that of its order book of Rs 10,100 crore, overseas orders account for almost a quarter. Mundhra is now planning forays into the mining sector, possibly in collaboration with a foreign firm. “Mining operations involve huge earth-moving and material handling, which are our core competencies. Tying up with a reputed mining company will give us the synergy to take up mining projects in the country,” says Mundhra.

One for the nest egg