Companies with revenues less than Rs 1,000 crore that grew the fastest in 2007.

Companies with revenues less than Rs 1,000 crore that grew the fastest in 2007. 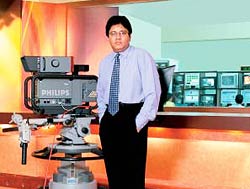 Kalanithi Maran
Despite competition from ZEE and other regional channels, Chennai-based SunTV continues to remain top of the heap in southern India. At last count, it had 20 TV channels, 37 FM radio stations, two daily Tamil newspapers and four magazines. For the year ended March 2008, the Kalanithi Maran led media group reported revenues of Rs 810.60 crore and a net profit of Rs 332.7 crore—a 19.6 per cent and 34.7 per cent jump, respectively, over 2006-07. According to analysts, Sun is expected to maintain 18 per cent CAGR until 2010.

Indiabulls financial services’ journey from a congested office near Hauz Khas in Delhi to swank Colaba (South Mumbai) has taken a little over eight years. Its revenue grew at a CAGR of 159 per cent and profits even faster at a CAGR of 184 per cent between 2002-03 and 2006-07. During the last financial year, it logged consolidated revenues of Rs 1,688.8 crore and consolidated PAT of Rs 580.60 crore— a jump of 110 per cent and 91 per cent, respectively, over the previous year. Yet, its market cap has plunged steeper than the Sensex, from a peak of Rs 24,823 crore in December, 2007 to Rs 10,711.09 crore at present (on May 22). So why aren’t investors too impressed with Indiabulls?

While most of the players in the textile industry are still reeling under the impact of a stronger rupee, Kanpur-based Shri Lakshmi Cotsyn (SLCL) makes growing in the face of adversities seem like a cinch. For its financial year ending June 2008, SLCL, which manufactures denim, terry towel, home furnishing, nylon and apparels, expects to clock revenues of around Rs 900 crore, up 40 per cent from last year. Says M.P. Agarwal, CMD, SLCL: “We expect our net profit to cross Rs 60 crore in 2008-09 (Rs 36.32 crore last year).” The reason, as Agarwal explains, is largely the aggressive capacity expansion.

Our performance over the years has been very good,” says A.R. Mundra, BRFL’s Executive Director, a bit modestly. “We have been doubling our top line as well as bottom line year after year (for three years now).” Driving the Rs 239-crore company’s growth is its investment in capacity expansion; by December ‘08 it plans to increase its garment making capacity from 64,000 pieces a day to 200,000 pieces a day.

Ever since DBS invested in this company two years ago, Cholamandalam has expanded its portfolio of loans and tapped newer cities. Loan disbursements have jumped from Rs 3,104 crore in 2006-07 to Rs 5,150 crore last year. What’s ahead for Chola? “We will target SME products, extend home equity loans across the country, expand e-broking, look to finance construction equipment,’’ says Atul Pande, Managing Director.