One wintry day in 2007, Vijay Mallya, arguably the Indian billionaire with the most panache, decided to leave behind his personal Airbus Corporate Jet to fly an up-and-coming low-cost airline from New Delhi. It was only after the chairman of Kingfisher Airlines, billed India's only five-star airline, had settled into seat 12D, in the emergency row, and the Mumbai-bound plane was in the air that the low-cost airline's CEO was informed that a rival was on the flight.

Mallya, who sussed out the airline's service - he sat in the first row for part of the flight to get a feel of the 'premium' row, for instance - was prescient. The airline he was getting a feel of was IndiGo.

IndiGo today has a market share - a shade under 20 per cent - that jostles every month with Kingfisher for the No. 1 spot among Indian aviation firms. Not only has it achieved that with 43 planes, versus Kingfisher's 66, just five years into operations, it is the most profitable in the Indian airline business. It is an unlisted airline and not required to make its revenues and profits public, but company insiders say its 2010/11 revenues were around Rs 3,200 crore and net profits Rs 700 crore. Kingfisher reported a loss of Rs 1,027 crore on Rs 6,396-crore sales the same year.

The man who bested Mallya and, indeed, most of the Indian airline industry is Rahul Bhatia, a business-man whose family made its millions in the air-ticketing and travel trade. Bhatia, who stands over six feet yet does not look tall, is an unlikely entrepreneur behind IndiGo, which like other low-cost airlines in the world offers just two-and-a-half-feet of space between rows of seats in its aircraft. But in a country where the average man stands five-feet-fiveinches, passengers do not seem to have noticed. Instead, they have flocked to IndiGo, making its flights the most crowded in the industry with a load factor of 89 per cent.

In a market that today flies around five million people a month and is projected to grow 7.5 times by 2020, IndiGo has a clear headstart - one earned by careful planning, patient capital and attention to detail and execution, run by a 4,000-strong team that lives by its "on time, hassle-free" service motto. 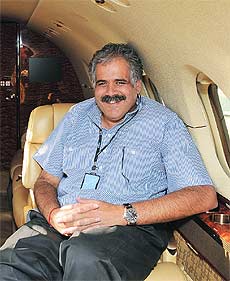 IndiGo Founder Rahul Bhatia inside a Hawker Beechcraft private jet in New Delhi
At the 2005 edition of the biennial air-show at the Le Bourget airfield on the northern reaches of Paris, the biggest such event in the aviation industry, little-known IndiGo made a splash by placing an order to buy 100 Airbus A320 planes to be delivered by 2015. The 180-seater planes started arriving about 18 months later at the rate of about one a month. That baby-step-by-baby-step expansion continues. Six years later, in January, 2011, IndiGo signed a deal to buy 180 aircraft between 2016 and 2025 - effectively, one plane to join the airline every 20 days.

The first 100-plane deal, Kapil Kaul, Chief Executive, South Asia, Centre for Asia Pacific Aviation, an industry consultancy firm, believes was a game changer. "That order got IndiGo a great price, which allowed the airline to actually book revenues on every aircraft it received instead of worrying about funds. Being fully funded and having a great business case, it was able to concentrate on brand building and achieving operational excellence." Having Rakesh Gangwal, former CEO of US Airways, on board as a co-founder and minority shareholder has also helped.

To put IndiGo's ambitions in perspective, Singapore Airlines, which will start a low-cost carrier in 2012, has 107 planes and 116 on order, including optional extras. A better comparison will be with Air Arabia, a low-cost airline from the United Arab Emirates, or UAE, which has 23 aircraft today and another eight on order.

Go west, go east
IndiGo next has its sights set on international aviation, and the likes of Singapore Airlines, Air Arabia and AirAsia - a Malaysia-headquartered airline which has perfected low-cost, long-haul operations - are sure to be watching keenly. On September 1, an IndiGo A320 plane docked at Terminal 3 of New Delhi's Indira Gandhi International Airport for the first time. As a low-cost carrier, it usually operates out of Terminal 1, but this was its first-ever flight outside India's boundaries and the omens were good. The flight to Dubai took off almost full.

There is, says Ghosh, "massive potential for regional flights between India and the Arabian peninsula and South-East Asia, where there is a significant population of people who travel back and forth." He expects a repeat of what happened on domestic routes after low-cost carriers started operations in India to play out on the international legs, too. "Five years ago, you paid Rs 10,000 to fly between Delhi and Bangalore; now you pay Rs 4,000 to 5,000." IndiGo has introductory to-and-fro fares of Rs 9,999, including taxes, on the Delhi-Dubai and the Delhi-Bangkok legs.

Click here to Enlarge
The lowest return fare to Singapore from Delhi is around Rs 18,000 today. IndiGo's services linking Kerala to the UAE and Kolkata to Bangkok are to start late this year.

Affordable fares coupled with quirky advertising campaigns with IndiGo's signature 'arrowplane' logo have helped it gain mindshare. But, as almost everyone who flies IndiGo will vouch, advertising and smart-looking stewardesses count for nothing if flights are late, and IndiGo has an enviable on-time record of around 90.2 per cent for months on the trot. The airline's first few international flights are experiencing load factors of close to 95 per cent and - the early success counts little - they are on time.

IndiGo's rapid growth has meant that it has been recruiting personnel - pilots, stewardesses, ground handling staff and managers - at a frantic pace. It is expected to hire over 1,000 people in 2011 alone. With these numbers, challenges of preserving the company's culture kick in, points out Kaul. This is something Ghosh, who flies to each of IndiGo's 26 domestic destinations to address staff the first quarter of each financial year, is acutely aware of. By October-end, IndiGo will also have four international destinations. "This is a truism, but what really makes the difference is the people. Everyone in India has similar fares, same airport charges, same fuel costs, same salaries… yet, we are the fastest growing low-fare carrier in the world," he says.

In an earlier interview with BT, Ghosh gave an example of how the IndiGo staff at the Chennai airport gave feedback to the senior management that the airline was often short of wheelchairs. This was puzzling because the company had followed the same count it did at other airports based on passenger estimates. The requirement at Chennai, IndiGo figured, was disproportionately higher because there were more people flying in and out for medical treatment. "So we gave a bigger budget for wheelchairs. This was a simple idea but had huge customer impact," Ghosh had said in April.

The airline, which earlier ran rolespecific training programmes like any other airline, decided to merge training into one central operation with three segments: one, functional skills training aimed at specific roles like that of pilots, in-flight crew, ticketing attendants, baggage handling, among others. The next segment was coaching for customer service and soft skills. Last came leadership training at all levels. This last segment of training, Ghosh insists, has helped the airline. "The way it is in our industry, a pilot is functionally just a pilot no matter how many years he has done. Then, after 30 years of service, you make him a vice president of flight operations and expect him to manage 500 pilots," he says, explaining why the Indian airline industry has not produced enough leaders from the ranks.

Kaul, the aviation consultant, also sees other risks before IndiGo succeeds globally. "It is a different ballgame on international sectors against the likes of AirAsia and the new proposed lowcost carrier from Singapore Airlines, which will use 400-seat Boeing 777s."

Also, IndiGo's business model, which requires it to generate enough cash to make monthly lease payments, could crimp its ability to sustain low international fares when faced with rivals with deep pockets.

There are rough pockets that IndiGo will fly through in the years ahead, but for now the best bet is to live up to its airline code: 6E. Sexy, indeed.