IT, ITES worst-hit; Healthcare and Pharma in welcome uptick. If you were hoping that the new financial year would spawn an upturn in hiring intentions of India Inc., that has not come about. What’s more, the hard times have gotten harder. At least this is what the BT-TeamLease Employment Outlook Survey of 493 companies for the April to June 2009 quarter reveals.

In the survey, the Net Employment Index (the difference between the percentage of respondents reporting an increase in hiring and those expecting a decline) stands at the lowest ever, 24 per cent, a drop of 10 index points from the last quarter. Spread across eight cities—Mumbai, Delhi, Bangalore, Kolkata, Chennai, Pune, Hyderabad and Ahmedabad—the survey covered the following sectors: Manufacturing & Engineering, Financial Services, IT, ITES, Infrastructure, Retail, Media, FMCG, Telecom, Healthcare & Pharma.

According to Surabhi Mathur-Gandhi, General Manager, Team-Lease Services, the survey results are bittersweet. Nobody can question the downward trend in growth and expansion plans across a wide swathe: Financial Services, ITES, Retail, FMCG, Manufacturing, Engineering and IT. “The long-term view of India becoming a more attractive investment destination stands, but we will need a few more quarters to validate a turn from job destruction to job creation,” says Mathur-Gandhi.

Y.V. Verma
End of downsizing does not mean beginning of hiring. Job prospects look up only when the economy becomes stable. Till that happens, organisations prefer to remain lean. Subsequently, the job freeze has deepened, more so at large IT and IT services companies, which are still in the midst of frozen junior executive hiring, delayed on-boarding of freshers, besides holding back on increments and promotions in the last quarter. Says Venkat Sastry, Partner, Stanton Chase: “Now, a few companies seem to be taking the lead in getting a reality check and they’re slowly looking to fill existing vacancies.” But, candidates can expect slow responses, tepid offers and little room for negotiations in today’s market. That explains hiring intentions for April to June 2009 quarter at 24 index points, the lowest yet compared to the last 10 quarters.

Click here to Enlarge
Though targeted hiring is on, cost-cutting is still the order of the day. “There is little discussion on company or unit-wide hikes or promotions today and most of the talk centres on how to keep people costs down or even reduce HR expenditure. The only staffing will happen where there is a definite requirement or an absence of a specific skill-set within the company,” says Srinivas Kandula, Global Head (Human Resources), iGATE Global Solutions.

Healthcare shows promise
However, HR experts like Marcel Parker, Chairman, Ikya Human Capital Solutions, foresee hiring picking up a slight momentum this quarter and slowing down towards the latter half. “This could be on account of specific pruning of staff at the end of last year. As a result, some key positions would have become vacant and would need to be filled up,” he says.

So, where are the jobs? According to recruitment firms and HR heads, sectors such as Transportation & Utilities, Manufacturing, Telecom, Public Administration, Education, Pharma and Insurance are all likely to see hiring in the quarter. The worst-hit will continue to be IT, ITES, Retail, and Financial Services.

Infrastructure is a mixed bag. T. Shivaraman, Managing Director, Shriram EPC, points out: “Among the infrastructure services, power is doing well compared to the others and hiring is happening. Even here, private players are more cautious while the public sector is going full blast.”

Healthcare & Pharma sector are primed to act as curative medicine in the midst of the economic crisis. “Pharma will look at hiring in the areas of regulatory and R&D, especially Life Sciences and Biopharma,” says Parker.

Job creators
While hiring plans for all levels have been revised downwards compared to the last quarter, mid-level jobs are in the firing line. Of the little hiring taking place, entry level and senior critical functions are cornering the largest chunk. At Maruti Suzuki India, the recruitment will continue to focus on R&D and Engineering Support areas.

“However, depending on the market situation, we will adopt a flexible approach in recruitment for other functional areas, too,” says S.Y. Siddiqui, Managing Executive Officer (HR, Finance and IT).

The company has already recruited about 300 graduate engineers and entry-level management graduates during the campus hiring process last year, who will join in May and June 2009. “Our overall plan is to touch 1,000 engineers in R&D function by 2010 and we are on course. We were at 460 at beginning of 2008 and 730 engineers at end of March 2009,” says Siddiqui.

The auto major is currently scouting for talent with requisite skills and experience in R&D, Design, Modelling, Interiors, Exteriors, and Powertrain, at lateral levels towards strengthening its R&D manpower and capability. There will be 50 such openings in the April-June quarter.

Traditionally, the first quarter of the financial year sees increased hiring compared to the last quarter, mainly because the manpower budgets get approved and there is focussed hiring which picks up speed. 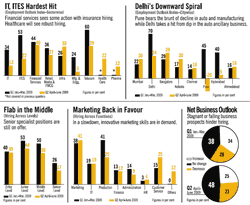 Click here to Enlarge
This year, however, a major part of hiring decisions is likely to pass to second and third quarters because of resource conservation and caution. Religare Enterprises, a diversified financial services group, is hiring largely at entry level and in sales functions. “We are looking at small-time horizons. We will look at incremental hiring as the months progress,” says Kamlesh Dangi, President (Human Resources), Religare Enterprises.

BPO player 24/7 Customer is hiring only at the agent level and, even there, it expects to take longer to fill positions due to the slowdown.

“We would prefer to internally grow people into senior leadership positions, rather than hire people from outside the company,” says S. Nagarajan, Founder and People Head, 24/7 Customer. Durables major LG Electronics India (LGEIL) has decided to create 2,200 new jobs in 2009. “This year, nearly 2,000 people will be recruited from ITIs. We also intend to strengthen our partnership with 45 ITIs in 2009,” says Y.V. Verma, Director, HR& MS, LGEIL.

The targeted hiring for the sales function reflects the topmost priority of companies at the moment: customer acquisition. A quarter ago, marketing and customer services had witnessed maximum job destruction. Both the functions, according to the survey, lead in terms of hiring intentions. Click here to Enlarge
Business blues
So far, 2009 is proving a testing year for Indian economy. As a result, the business confidence is at an all-time low of minus 2 index points and that has a direct impact on hiring plans. T.V. Mohandas Pai, Director, HR and Administration, Infosys, says: “This is not the time to be extravagant on your hiring or your money. The market is uncertain... it is difficult to estimate how long the softness in the market will persist, but we will proceed with extreme caution on the people front.”

Business confidence in Pune city is at an abysmal low of minus 40 index points. This is mostly due to an overall decline in auto, auto components and ancillaries.

Says Vidyashankar Krishnan, MD, MM Forgings: “Many forging units in the south and the rest of the country have shut shop and 50,000 jobs (out of a total of around 200,000) have been lost across the nation, though the tally could be more.” Subsequently, most working units both in Tamil Nadu, Pune and Gurgaon are operating only at 25 per cent capacity.

Clearly, it will be a while before job market springs back to life.

Are you losing the good people?

Campus interview? No Thanks!