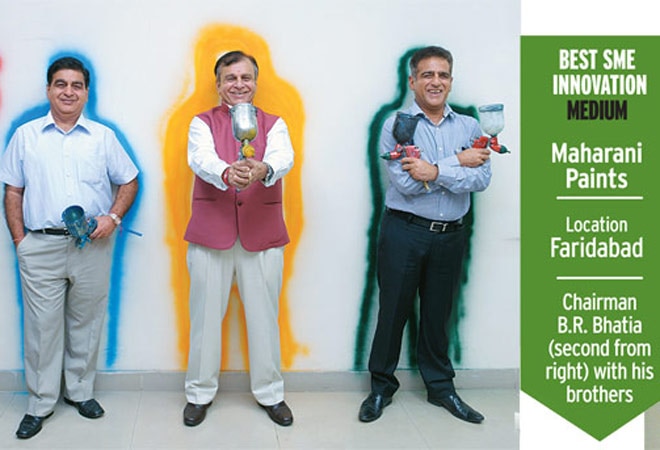 Among the industrial paint makers, Maharani Paints is known for its technology to convert sludge or waste paint into reusable one. The company owns patents for the technology in India, Canada and Korea, and counts among its customers automakers such as Tata Motors, Hero MotoCorp and Mahindra & Mahindra.

The company, under the leadership of its Chairman B.R. Bhatia, has leveraged the technology so well that waste paint contributes six per cent of its top line. Set up in 1986 by Bhatia, currently it has one factory each in Haryana, Uttarakhand and Maharashtra. Unlike companies like Asian Paints, which make industrial and decorative paints, Maharani Paints focuses only on industrial paints.

Bhatia kept away from decorative paint business as it involves huge marketing costs and need a robust distribution network. In February, the company had entered into a pact with Japan's Dai Nippon Toryo Company for better know-how on paint manufacturing. Growth has been consistent for the company.

VIDEO: Why Maharani Paints is the most innovative SME

Its gross sales have grown from around Rs 82 crore in 2010/11 to Rs 100 crore in 2013/14. It aims to cross Rs 132 crore by the end of this fiscal year. "When your balance sheet is strong, everybody is after you to give funds," says Bhatia, eldest among four brothers.