Getting the vision going

Becharam Manna gives up on his nap. He is being repeatedly disturbed by congratulatory telephone calls. It is the day after his party, the All India Trinamool Congress or TMC, swept to power in West Bengal ending the Left Front's 34-year reign. Manna, who spearheaded the battle of Singur's farmers to get back the land the government acquired from them for the Tata Motors' Nano plant in 2006, has just won the Haripal seat in Hooghly district - a stronghold of the Communist Party of India (Marxist), or CPI(M), since 1967 - by a margin of 22,073 votes.

Manna fields another call, this one from a TMC leader worried about the arrest of a party worker. Manna tells the caller the arrest is justified: the worker had hit the bottle and attacked the local CPI(M) office.

"Overnight everyone has become a Trinamool supporter, and the situation is difficult to control," he says, referring to Left cadres who have been switching sides. TMC chief Mamata Banerjee had ordered her party workers to refrain from victory marches, celebrations and "badla" or taking of revenge, after the elections produced a stunning result: her party alone secured 184 of the 294 seats in the state assembly. The Congress, her ally, got 42. And the CPI(M), leader of the Left Front, scraped through with just 39 seats.

Singur was the launchpad for Banerjee's meteoric rise to power. Manna, Banerjee's point man in Singur, has just one goal for now: ensuring that the farmers who refused to accept payment for about 400 acres are restored ownership of the land. Only then can he begin thinking of industry. The incomplete and abandoned Nano factory nearby, occupying a 1,000-acre plot, is a symbol of all that went wrong, and the hurdles ahead.

Banerjee's biggest challenge will be acquiring land for industry, given her role in fighting against land acquisition from farmers at Singur and later Nandigram. As Gautam Deb, a veteran CPI(M) leader and former housing minister, tells BT, the people have put the Left in the Opposition and so the Left will watch the government's actions keenly. "Mamata should respect the verdict and perform," Deb said. "The main slogan of Trinamool was Ma-Mati-Manush (Mother, Earth, People). Industry was on the agenda but not a focus."

Deb has a point. The TMC's manifesto and 200-day action plan read like a mishmash of Planning Commission dreams. Sample these: "Enhance the ease of doing business for micro, small and medium enterprises (MSMEs) by radically cutting back obstructive rules, regulations and permissions…. set up an industrial hub in each district…."

West Bengal was once a hub of manufacturing, but Left trade unionism prompted many players to shift base to other states over the first two decades of Left Front rule, and scared away prospective investors. Amit Mitra, who is now one of Banerjee's key lieutenants as the legislator from Khardah in North 24 Parganas district - points out that before the Left Front came to power in 1977, West Bengal had a 13 per cent share of India's manufacturing. The share has since shrunk to a low single digit.

Mitra, a complete outsider in the state's politics who defeated CPI(M) stalwart and finance minister Asim Dasgupta, recalls how, as a child, he used to marvel at the industrial buzz in Howrah on trips there with his grandfather, Suresh Chandra Bose, the elder brother of Netaji Subhas Chandra Bose. "Now there is nothing there. Only some forging work is being done," says Mitra, former secretary general of industry lobby Ficci.

Can the new government bring back industry, tackle trade unionism and revive agriculture? Abhirup Sarkar, a professor of economics at the Indian Statistical Institute, says, quoting official sources, that the state accounted for more than 87 per cent of the mandays lost in India due to strikes and lockouts in 2007/08. "Mandays lost due to bandhs will have to be drastically reduced to bring back revenues," he says.

He suggests three other action areas. One, improve the infrastructure (only 23 per cent of roads in the state are pucca at present, against the national average of 55 per cent). Two, disperse industrialisation across the state with proper planning, as against the Kolkata-centric model propagated so far. Three, improve tax administration. 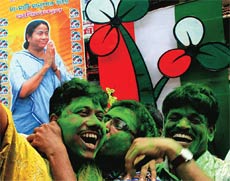 Trinamool supporters celebrate their victory in Kolkata
In her manifesto, Banerjee has promised to revive the agricultural economy. According to the party, the agricultural sector was growing at 17 per cent a year before the Left came to power in 1977. After 34 years of Left Front rule, the rate is down to seven per cent.

Sanjiv Goenka, vice chairman of the Rs 17,000-crore RPG Enterprises, and younger son of group founder Rama Prasad Goenka. seems ready to swear by Banerjee after interacting with her over the past few months. "She has inspired confidence," he says. The RPG group's businesses include power generation and supply, retail, music and entertainment, carbon black and tyres. It also includes CESC, which supplies power to Kolkata and some adjoining areas, and which was once a favourite target of Banerjee's, drawing her ire over tariff hikes.

Banerjee's election plank and her 200-day plan, Goenka says, are "doable". Broadly, what the state needs are better roads and a lower tax on aviation fuel to attract more airlines. With the TMC being part of the alliance at the Centre, the state government will be in a position to influence the Union government's actions, unlike the Left Front governments which, except for brief periods has always been at odds with the Centre.

He is investing around Rs 10,000 crore in a power project in Haldia. The aerotropolis, or an airportcentric city, in Burdwan district, is one of the few large infrastructure projects of Left rule to have survived controversies over land acquisition. The promoters, Bengal Aerotropolis Projects Ltd, or BAPL, have acquired 1,800 acres of the 2,300 acres required and expect the airport to be functional by 2012. The total investment expected is Rs 10,000 crore.

The TMC manifesto says completion of the project is one of its goals. Subrata Paul, CEO and Director of BAPL, says that with the change in the government people will expect faster development. "Roads and connectivity becomes a driver of economic growth… . However, we will require some anchor investments."

The high sales tax levied on aviation turbine fuel by the state is also a worry. The resource-starved Left Front government had imposed a 25 per cent tax on aviation fuel, which deters airlines from refuelling in the state. "We will request the state government to follow the Maharashtra pattern in West Bengal too," says Paul. Maharashtra levies 25 per cent tax only in Mumbai and Pune; at other airports in the state the rate is four per cent. So too the new government could be asked to spare airports other than the one at Kolkata, including the proposed aerotropolis.

Not all industrialists in the state are willing to come out in open support of the new government. But, as a BT poll carried out by C fore shows (See Page 60), an overwhelming majority is happy with the change and bullish on the TMC's prospects. Call it avoiding wasteful spending, or an aversion to change or paribartan: the fading world map at the CPI(M) state unit headquarters still shows the Soviet Union. The Trinamool rode to victory on its cry for paribartan. The Left Front did try to change things, but they were too late and often in the wrong directions. In the past decade, the only exciting sector has been information technology or, IT, and IT-enabled services. When Buddhadeb Bhattacharjee began his second term as chief minister in 2006, the IT hub in Salt Lake's SectorV was bursting at the seams, and the state was trying to market the much-delayed Rajarhat New Town project further north.

But IT majors such as Infosys and Wipro were put off by high real estate rates quoted by the government agency developing the township and came in only after much haggling. Earlier this year Cognizant Technology Solutions built a new campus along the city's eastern fringe. West Bengal's software services revenues have gone up from Rs 4,000 crore in 2007/08 to Rs 6,500 crore in 2009/10, but its share in India's total revenue from software is just 2.69 per cent, according to the Electronic & Computer Software Export Promotion Council.

At the policy level, the government paid scant heed to start-ups and local companies as it rushed to woo national heavyweights, says S. Radhakrishnan, a former president of the Bengal Chamber of Commerce and Industry. "It did nothing to encourage local entrepreneurs. It was more worried about whether a Wipro or an Infosys would come," says Radhakrishnan, who is also the Managing Director of Descon Software. A section of the CPI(M), however, even questioned Bhattacharjee's rationale of exempting the IT sector from strikes, and its labour wing tried unsuccessfully to unionise the techies.

Cognizant Technology Solutions, a company with its India headquarters in Chennai and which started operation in Kolkata in 1996, has five facilities and 9,500 professionals operating in the state. The firm's senior officials feel Kolkata is a significant destination because of the academic institutions here and the low operational expenses.

Still, the state has a long way to go in catching up with places like Bangalore and Hyderabad. It has fewer major IT players. "The state government needs to bring in some major investments to keep the growth curve moving up," says R. Chandrasekaran, President and Managing Director, Global Delivery at Cognizant.

For Banerjee, it is going to be a battle against time and her own record as the stormy petrel of Bengal politics ready to use any opportunity to trouble the Left Front government. Her lieutenants, though, think she has vision and is unmatched in her understanding of economic policies for the people, even though she is not an economist. Mitra says: "I feel industrial growth will not be incremental. It will be geometric."