Strong domestic demand for steel has led to both greenfield and brownfield capacity expansions, making India the fifth-largest crude steel producer in the world. 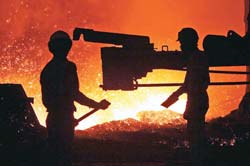 As on October 2007, finished steel production reported a year-on-year growth of 7.1 per cent to 29.92 million tonnes, while iron ore exports have increased by 100 per cent in the last five years (2002-07) and are likely to grow faster as the global steel production increases.

Construction and automobile sectors are the key drivers for growth in the metal industry. Several foreign players have evinced interest to set up steel plants in India, including Japan’s Kobe Steel and ArcelorMittal.

At the same time, Indian firms have been active in acquiring firms abroad, such as Essar Steel’s acquisition of Algoma Steel in Canada.

The government is launching a National Research and Development Mission with a corpus of Rs 60-65 crore to be funded from large steel companies to promote R&D in the domestic steel sector.

Media - Good news all the way