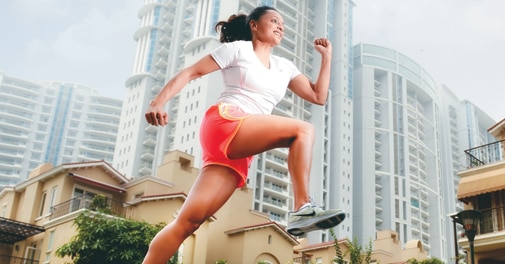 The approaching click-clack sound of her heels breaks the silence of the boardroom. Swarupa Sanyal, 41, enters the rather colourless room and places her iPhone - clad in a bright pink cover -- on a table. Wasting no time she starts to talk about a blueprint that aims to transform Genpact, India's largest business process outsourcing firm, over the next five years to make it more profitable.

Sanyal, better known by her nickname Sasha, is spearheading the transformation initiative as Genpact's global leader for strategy and corporate initiatives. For years Genpact's focus was on revenue growth. It had become a giant BPO company with revenue of $1.9 billion and a net profit of $178 million in calendar 2012 from 24 business verticals. The spread of revenue was massively dissipated. But now the company's focus is changing to increasing profits.

Sanyal's target is to improve Genpact's 2013 earnings by $40-60 million by reducing general and administrative expenses, increasing pricing and adding clients. Sanyal is confident the targets will be comfortably met. She says her team is already working to improve profit from 15 of Genpact's least profitable clients.

The blueprint also envisages reducing the number of business verticals to eight. One of the eight will generate $1 billion in revenue. The other seven will contribute $300 million each. Of the two service lines that contribute $200 million each, one will yield more than a billion. The broader objective is to double Genpact's revenue to $4 billion without making any acquisition by 2017. This means Genpact will have to grow faster than the rest of industry.

It wasn't overnight, however, that Sanyal got this challenging assignment.

Sanyal recalls a phone call she got six years ago from N.V. "Tiger" Tyagarajan, Genpact's CEO. At the time, Sanyal was in Corbett National Park on a vacation. The call stirred the serenity of the peaceful jungle. Tyagarajan wanted her to run Smart Enterprise Processes, a framework which helps Genpact's clients become more efficient, faster and productive. The methodology uses a data analytics and diagnostics mechanism and cuts through Genpact's entire business today.

Sanyal was reluctant to accept the offer as she had never been in a similar role. Moreover, her daughter was just six months old at the time. "Are you serious? It's not the right time," she told her boss. But Tyagarajan was sure he wanted her. "Whenever you needed us we were there for you. Now, we need something," he said. Sanyal agreed. Her husband took a break from work for a year to take care of their kids, as she would travel 20 days a month and work 14 to 15 hours every day.

Nothing in her career has been more shocking ever since taking that assignment. Not even the latest blueprint. When the blueprint started in July 2012, Sanyal could not pull together a long-term plan without knowing what people outside Genpact thought about it. So in December she hired McKinsey to talk to clients, experts, competitors and employees, which helped finalise the strategy.

Even people outside of Genpact think of Sanyal as a good leader. "She can assimilate everything and give an outcome which everyone can follow," says Kimberly McCaslin, Operating Partner at Bain Capital, which has invested $1 billion to pick up a 30 per cent stake in the BPO. "She is a very strong leader who can tie the pieces together."

In more than a decade with Genpact, Sanyal has taken up seven roles. "Every time I get comfortable Tiger gets me to do something new," she says.

Today, she has more time to herself. She is home by seven in the evening, and doesn't take calls until 8:30 p.m., when both her kids go to bed. She spends another hour with the kids in the morning. If work calls, she goes back to office after 8:30 p.m. Her life is extremely regimented. "Monday to Friday… I get up, go to the gym, get the kids ready, take them to school, go to work… and I am in bed by 9:30," she says. "But if you see me on a Saturday or a Sunday, I am a puddle of mush. I don't do anything."

Through all this she is suddenly reminded of her childhood, when her stepfather told her that a woman can either be good at work or at home. "Even at that time I wanted both. There was never a choice," she says. "I always wanted kids… and I always wanted to work."

That's the woman in her, and maybe that's where the pink phone cover comes from.