The IBM India chief began as a trainee in the company and is one of a handful of women heading a technolgy company in India. 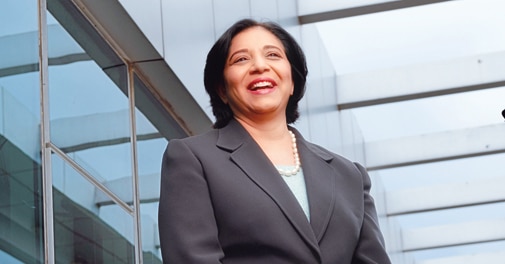 Not long ago, Vanitha Narayanan had the time to pluck rosemary and basil from her kitchen garden at her home in the United States to cook dinner for her family every evening. Italian, Oriental, West Indian, North Indian and South Indian - she could handle any cuisine. But dinner wasn't just a chore for Narayanan - it was a form of relaxation, after her demanding day job at International Business Machines (IBM).

Things changed after she landed in India in 2009. Her high-profile roles as Sales and Distribution Leader and then Managing Partner for Global Business Services left her little time to even watch television food shows, let alone cook. Narayanan has more than enough on her plate as IBM India's new Managing Director, a role that has propelled  her into the league of just a handful of women to head a technology company in the country.

Narayanan's work-life balance may be off  - her day is packed with back-to-back meetings - but she isn't complaining. IBM has done well in the past few years: the company does not break up revenues by country or headcount, but sources say it employs about 150,000 people. That makes it the largest multinational employer in the country. Narayanan has shepherded the company beyond its traditional strengths in telecom. "In the last few years, I have taken the IBM story to many industries beyond telecom - banking, financial services and insurance, industrial and retail segments," she says.

Since she moved to India, IBM has reported significant wins in insurer Birla Sun Life, Asian Paints and Godrej Consumer Products, among others. Narayanan applied her learning from telecom to other sectors. "Before I came here, I thought of myself as a telecom person - I spent 20 years in that industry. For the first time, I have started working with companies in manufacturing and industries I have not worked with before," she says.

The 54-year-old IBM India chief has risen from the ranks. She began her career at the company as a trainee, servicing telecom customer Southwestern Bell Telephone Company in Missouri in the US. She spent 10 years working with this client. "It has defined my IBM career. It helped me lay a foundation - you respect the industry of your client and sometimes, the client is your best teacher," says Narayanan, a management graduate specialising in management information systems. "Apart from a job in a department store, IBM is my only job. It was the only place where I wrote a professional resume and was interviewed."

Steadily, she climbed the corporate ladder to become Global Vice President for IBM's telecom solutions offerings and in 2006 moved to Shanghai to run the communications sector business for IBM's Asia Pacific Unit. India happened next. And it has been the ultimate feather in her professional cap, considering the size of domestic business, the number of people it employs and IBM India's strategic importance from an outsourcing perspective. "IBM wanted somebody with an appreciation for the market, for what it needed from a local perspective. I brought my experience with IBM, in global and local roles. Plus, they had me here for the last four years learning the market and running parts of the business," says Narayanan.

But Narayanan's familiarity with Big Blue's India business dates back to 2001 when she was asked to help start a local telecom practice. She did a "special project" and put together a team that created history. IBM bagged a landmark $750-million outsourcing deal for 10 years with Bharti Airtel in 2004, a contract now valued at $2.5 billion.

Despite her meteoric rise, Narayanan comes across as extremely modest. She says she doesn't think she is powerful - she prefers the word 'influential'. She also struggles to pinpoint a defining moment in her career. "I don't have these night-and-day moments," she says. "My first decade was about appreciation for an industry and a client. The second decade was about bringing value, about building organizational capability. The third decade is about leadership in different cultures and environments."

Narayanan pauses for a while before talking about her leadership style. "You should ask my team," she says. Colleagues say Narayanan is both collaborative and decisive at the same time. "She is no push-over," says Jeby Cherian, Vice President and Managing Partner of IBM Global Business Services, India/South Asia. "But she can build trust very easily. "

Queen of the Court - Pallavi Shroff

I feel I grew with HDFC, says Renu Sud Karnad