Roopa Kudva, 47, Managing Director and CEO of Crisil, has been with the rating agency for 19 years. She is also Region Head, South Asia, of Standard & Poor's, which holds majority shares in Crisil. 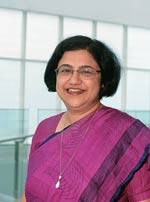 Roopa Kudva, MD and CEO of Crisil
"A company like Crisil could not have grown at any time other than the post-liberalistion era," she says. "Today, we shape opinion." Kudva started her career in 1986 at IDBI, after an MBA from IIM Ahmedabad.

Her early years were not always easy. "One of my first assignments was the inspection of a sugar mill in Uttar Pradesh," she says. "There were no facilities for women, and they were not used to seeing a woman in a commanding position." At Crisil, she says, opportunity and compensation are not based on gender. "Meritocracy rules," she says.

"Here, the power of your idea is more important than hierarchy.

WHEN THE GOING GETS TOUGH
I switch to top gear