The only full-time woman director of an oil PSU says there is no glass ceiling
Anilesh S. Mahajan        Print Edition: Sep 15, 2013 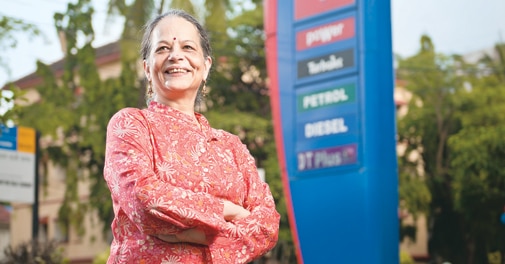 Nishi Vasudeva says she shattered no glass ceiling to become Marketing Director of Hindustan Petroleum Corporation Ltd (HPCL) in July 2011. To reach the top, she says, one must be professional. The fact remains that she is the only full-time woman director in some 20 public-sector oil and gas companies in India.  On August 21, the Ministry of Personnel, Public Grievances and Pensions recommended her name for the post of Chairman and Managing Director of HPCL.

"You must not expect positive differentiation," she says. "You should be ready to do what men do, if you are competing for the same position. If the job requires 15-20 days' travel a month, you should be ready."

"Vasudeva is a thorough professional and ambitious executive," says Nishi Mahajan Khurana, head of the North India chapter of Women in the Public Sector, a group of women officers of public sector companies. "With a larger pool of women executives, you will see more women on boards of not only energy companies but across the public sector."

Vasudeva, 58, says that until the 1990s, women accounted for five per cent of public sector company staff. Today, this number is about 11 per cent. "Women work in refineries, marketing offices, and on rigs."

She is responsible for selling 30 million tonnes of petrol, diesel and lubricants. Her focus on automation and IT upgrades is aimed at cutting costs. She is an old hand at setting up systems - she set up ERP in 2002, and became chief information officer in 2006. She completed the automation of the company's LPG terminal in Mangalore, making the country's biggest on-land storage unit more secure and efficient.

She also keeps tabs on the international lubricant market and diplomatic developments with Pakistan. "We can export products to them," she says. "HPCL's refinery is hardly 80 km from the border at Bhatinda, Punjab, and another one is coming up in Barmer, but the decision would have to be taken at the diplomatic level."
TweetYoutube
Tags: Nishi Vasudeva | Most Powerful Women in Indian Business | HPCL