Last November, when Reliance Mutual Fund launched its five-year close-ended equity fund, it gave up to eight per cent commission to distributors for selling the scheme. "Reliance MF gave minimum six per cent commission, one per cent more than usual to distributors who brought money to its new fund offer (NFO). Anyone who brought more than Rs 10 lakh could negotiate to get even more commission. Some got up to eight per cent," says Mumbai-based mutual fund distributor, Nilesh Rokadia. This means that a distributor got Rs 80,000 as commission for an application amount of Rs 10 lakh in the NFO. The high commissions, however, were within the regulatory framework. "It's a choice you make as a fund house - how much profit you want to keep and how much you give to distributors," says Sunil Subramaniam, Deputy CEO of Sundaram Mutual Fund. Reliance MF will operate on wafer-thin margins over the next three to four years, but being a large fund it can afford to do so.

There is no place for small players in this market, feels Nilesh Sathe, CEO of LIC Nomura Mutual Fund. "The game has become highly competitive and it will take longer than expected to make profits," he says. Sathe points out that with the big mutual funds on a spending spree and expanding operations aggressively, it is difficult for the smaller funds to survive. Consolidation appears inevitable in the industry. Unlike Reliance MF, a small player can't sustain on low margins. Reliance MF garnered approximately Rs 250 crore in the NFO and is believed to have shelved out approximately Rs 15 crore to distributors. The fund posted a net profit of Rs 229 crore in 2012/13. 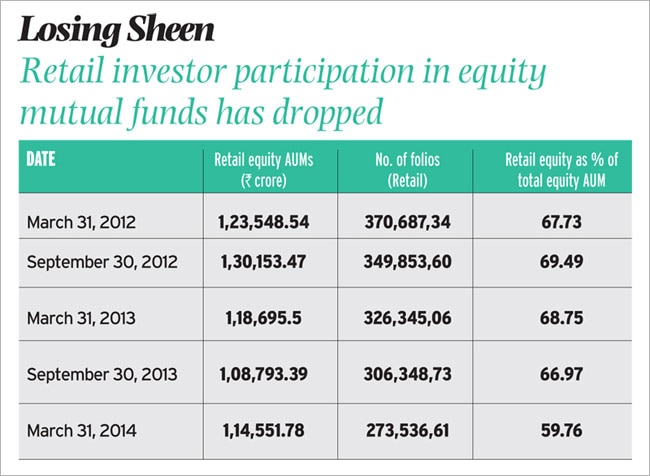 "Only serious players can survive. Weak and non-serious players will fade away," says Subramaniam, adding that the market regulator, Securities and Exchange Board of India (SEBI), too, wants serious players in the industry who aim to attain reasonable size and draw a substantial number of investors. In June last year, U.K. Sinha, Chairman of SEBI, made his displeasure known at the non-serious attitude of the bottom-ranked fund houses (in terms of performance). This was followed by the regulator increasing the net worth requirement for mutual funds to Rs 50 crore from Rs 10 crore.

Many, however, have been critical of the step."The rule is more like throwing a failed child out of school and not holding the teacher responsible. If the student fails, give him extra tuitions, but removing him from the school is not a solution," says Sathe. He believes the regulator should have given out licences more judiciously, rather than repenting the overcrowding later. "The Reserve Bank of India, for instance, to increase rural branch expansion, used to allow banks to open one new branch in a metro on the back of opening two in the rural areas. Similarly, SEBI should specify its objectives and try to formulate rules that will force mutual funds to increase retail participation," he adds. Subramaniam concurs. "There should be a clear diktat that mutual funds will not be allowed to come out with new funds if they don't open a specific number of offices and centres beyond the top 15 cities."

SEBI is clear that retail investors should participate in the equity market through mutual funds. It also takes its responsibility as protector of small investors seriously. The regulator, on its own, now reviews the performance of funds and fund houses. "We encourage mutual funds to give long-term (over three years) performance. In some cases, we did not approve new schemes until the long- term performance of existing schemes improved," says U.K. Sinha of SEBI.

In fact, where the long-term performance of a scheme has not beaten the benchmark, the regulator has sought an explanation from the fund manager. "I believe retail investors should come through mutual funds. Investors expect better returns from mutual funds than the benchmark index provides in the long term," says Sinha. "Fund managers are experts and investors pay them fees to manage their funds, and, therefore, they are expected to provide alpha (over the benchmark) in the long term."

Nimesh Shah, Managing Director of ICICI Prudential Mutual Fund, agrees with Sinha and has, therefore, set internal targets for his fund managers - they must ensure returns in excess of 350 basis points over the benchmark. "Today performance is the only entry barrier in this sector. There is no point in creating a large AMC, if your performance isn't beating the benchmark," he says.

According to a recent survey of around 2,600 people in India by Nielsen, only nine per cent were found to have invested in mutual funds. It was the eighth preferred choice of investors when it came to ownership of financial products. Life insurance and bank fixed deposits were the top two preferred investment channels.

Interestingly, the reason cited for not investing in mutual funds was their poor performance. Most investors felt that money gets tied up in mutual funds and there is no regular income from the investment.

In 2013/14, AMCs garnered over Rs 68,700 crore through NFOs. The figure was Rs 31,300 crore in 2012/13. Last fiscal alone Rs 3,677 crore was raised through equity schemes. However, in the equity schemes, Rs 1,653 crore came from close-ended equity funds. The reason was simple. In close- ended schemes, fund houses were able to shelve out more commission. (In close-ended funds, MFs can give more commission than the two per cent allowed in open-ended funds in a year.)

"The reason investors go with close-ended schemes is because it is stable money and they do not have to worry about redemption," says Subramaniam. It is also the reason why many mutual funds are launching schemes under the Rajiv Gandhi Equity Saving Schemes (RGESS) - while they can market them to first- time investors as tax-saving instruments, there will also be no redemption pressure due to a fixed lock-in period.

Lower margins and retail participation in equity schemes have already seen some funds shut shop. HDFC Mutual Fund acquired its smaller rival Morgan Stanley Mutual Fund in December, while Daiwa AMC was sold to SBI MF in June last year. There will be some further acquisitions but not on a large scale, say experts. This is largely because most of the mutual funds are in distress as there is no net inflow into equity schemes. The entire assets under management (AUM) are driven by debt.

"Going forward beating the index will become very difficult. If you see last year the number of funds that outperformed the index fell," says P.V.K. Mohan, Head Equity at Principal PNB MF. Money making will be tougher going ahead.

ONE SIZE DOESN'T FIT ALL

Mutual funds are evolving to meet the challenges before them. A few years ago, funds were focused on boosting AUMs. Size was primary then. Today, the tightening of screws by the regulator, especially by banning entry load in 2009, has seen fund houses differentiating themselves to attract investors. "The strategy has clearly been to uniquely position oneself in the minds of investors and distributors with some differentiation," says Vikaas Sachdeva, CEO at Edelweiss MF, which has positioned itself as a quant-based (formula-based strategy for trading) mutual fund. Similarly, HDFC MF is associated with trust, while Reliance MF is seen as an aggressive fund house in term of returns. "We are considered a specialist mid-cap fund house. Similarly, region-wise uniqueness is also becoming a huge attraction. For investors in south India, Sundaram is considered as safe as a bank, while Peerless MF enjoys huge faith among investors in Kolkata," says Subramaniam of Sundaram.

There is no doubt that the mutual fund is a push product and distributors continue to play a huge role in selling them. "It is already showing that it helps to have your own distribution," says Mohan.

But above all, the key to success for mutual funds is consistent performance. "The focus will be investor- centric and if you want investors to stick to you, you will have to deliver performance which is consistent," says Navneet Munot, Chief Investment Officer, SBI Mutual Fund.

A special annual package on the best mutual funds in India has been a regular fixture in Business Today since 2011. As in previous years, the rankings have been arrived at in partnership with Value Research. In the reports that follow, we also turn the spotlight on broad trends in the mutual funds' industry. Method Over Mind notes how funds are becoming more process-driven and paring excessive dependence on fund managers. A Passive Affair tries to understand why equity exchange-traded funds attract few investors, while Not Worth Its Weight charts the decline of gold as an investment instrument. Happy reading.