Oil & gas - Future is where gas is 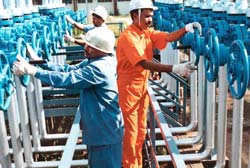 To address this and ensure energy security, the Indian government has embarked on a two-pronged strategy of increasing exploration and development of domestic basins (through successful NELP I-VI rounds) as well as acquiring oil equity.

While the country is deficient in crude oil, it is surplus in refining capacity and is a net exporter of petroleum products.

Additional capacities being planned by companies such as IOC, HPCL, Reliance Industries and Essar will further position India as a regional refining hub.

Going forward, gas is expected to emerge as one of the fastestgrowing fuels and will attract significant investor interest. The increasing global interest in the Indian oil and gas sector was evident by the heightened M&A activity.